Ford is taking its car tech quite seriously and the Detroit-based motoring giant wants you to have more fun in your vehicle. At CES, the company announced its new initiative, a developer programme for its in-car system Sync.

This programme will allow developers to build apps for its Sync enable cars, currently the car-maker has added apps like Pandora and Google maps but it wants to expand the scope of the system, which was launched in 2007.

“The Ford Developer Program marks a dramatic shift in how we will innovate new features and add value to our vehicles throughout the ownership period,â€ said Hau Thai-Tang, vice president of Engineering, Ford Global Product Development. “Opening the car to developers gives consumers a direct voice and hand in the creation of apps that can help our products remain relevant, up to date and valuable to our customers.”

According to Ford, the programme has been in beta with a group of invited developers as they work out details of the software development kit (SDK), documentation and technical support systems. With more than three dozen AppLink-compatible apps publicly available on Apple iOS and Google Android, the SDK is now mature enough that Ford engineers are ready to let the vast ecosystem of developers try it out.

“Since launching AppLink, weâ€™ve worked with developers ranging from a two-man startup at Roximity to large organizations like National Public Radio and Major League Baseball,” said Julius Marchwicki, global product manager for Ford SYNC AppLink. “The experience we gained from these projects as well as supporting hackathons at TechCrunch Disrupt and Facebook has helped us refine the development and testing process.”

At the present time, Ford is focusing on three categories of apps:

“The Ford program is similar to those at technology companies including Apple, Google and Facebook. App developers who want to enable their creations for AppLink can now register at http://developer.ford.com to download the AppLink SDK,” says the company.

Car tech offerings such as these are becoming more popular among car makers with Renault’s R-Link already working with developers to build apps for its on-board tablet. 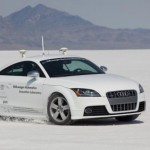