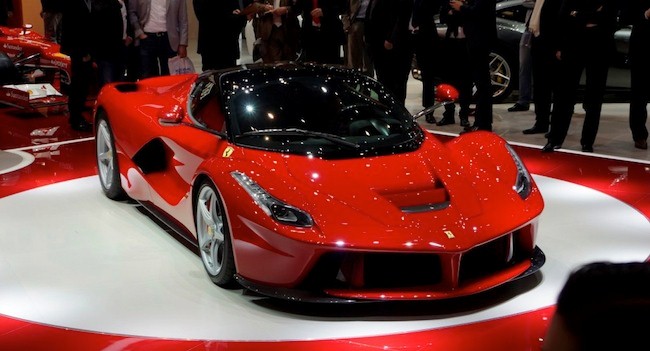 Undoubtedly the star of the Geneva Motor Show 2013, the LaFerrari is a masterpiece to behold. Any Ferrari is something special, but when one of its limited production marvels is released, the automotive world really does have something to celebrate. But that name! Simply awful, especially coming off a name like ‘Enzo’. However, hybrid engines, coupled with active aerodynamics make this a revolutionary car, not only for Ferrari, but for the whole world too. Say hello to the future of the supercar.

Ferrari was adamant; the V12 stays. Facing increasingly stricter emissions legislations, Ferrari were faced with a dilemma: smaller engines meant better emissions, but also meant breaking with tradition. So instead, the prancing horse has found a compromise, though it wouldn’t necessarily call it that.

The V12 from the F12 is the basis for LaFerrari’s own, sharing its displacement at 6.3-litres. It has been heavily tweaked, though, now putting out 789bhp, an improvement of 69bhp over the F12. But that extra power comes at a cost. The higher power figure is achieved at an incredible 9 250rpm, meaning low-down and mid-range power and torque is lacking.

Fret not, that’s what the electric engine is for! The beautiful fact of electric engines is that all the power that the engine offers comes instantly. No waiting. So while you would normally be waiting for the V12 to get into its stride, the electric motor is doing its magic and filling in the gaps with an extra 169bhp. The total torque figure of the car is “in excess of” 664lb ft. What that’s going to do to the rear-wheel drive only car can only be speculated. Expect a large tyre bill, though.

That’s not all though, because it’s not your normal hybrid setup here. With the help of the F1 gurus at Gestione Sportiva, an F1-esque HY-KERS system has been used to, well, make the LaFerrari one of the most technically advanced road cars ever produced. It captures the energy used under braking and in corners, transforming it into battery power. It also reduces emissions by 40% and increases the V12 engine’s power by 10bhp. But best of all is that it is 94% energy-efficient. For all the ancillary systems, like lights and interior instruments, a second electric motor is used. So three engines, then.

Ferrari touched on it with the 458 at first, Pagani took an interesting angle with it for the Huayra and McLaren has covered its P1 in it. Aerodynamics are becoming almost more important than powertrains these days. The easier a car goes through the air and also how the car interacts with the air, is vital to how the car will behave. To be able to change the car’s aero to suit a certain situation is phenomenal; and that is exactly what the LaFerrari does.

Ferrari claims to have the most aerodynamically efficient road car ever produced. It’s hard to say what that actually means: surely something different for Ferrari and, say, VW with its XL1. But nonetheless, there’s no doubting the LaFerrari’s aerodynamic achievements are extraordinary.

The active elements consist of flaps integrated into the front and rear diffusers, a central flap in the front splitter, a guide vain underneath and an awesome rear wing that slides up and out from the bodywork. The rear section and spoiler act to maximise downforce, where the diffuser flaps at the rear increase air expansion to increase extraction capacity — whatever that means. The front diffuser flaps do the same, though they also increase downforce at the front. The guide vain is deployed at high-speed to direct air away from the radiator to reduce drag.

Like the rest of the car, the carbon fibre chassis is absolutely top of the tech. Instead of a relatively mass built carbon fibre tub that McLaren uses for both the MP4-12C and the P1, the LaFerrari gets a hand-laid carbon fibre chassis. Most of it is made from T800, which is apparently a first for the automotive world, while T1000 directional tape and fabric is used in areas that are important for passenger safety because of its high energy absorption.

M446J unidirectional tape and fabric, for its extremely rigid and lightweight characteristics, is used for the structural pieces of the chassis, while the underbody is made from a composite mix of carbon fibre and Kevlar. Kevlar has many applications, from racing sails for boats, to bulletproof vests; and so here it is also used to protect the underbody carbon from road damage.

The purpose of using multiple types of carbon fibre was to reduce the amount of components necessary to make up the chassis and to keep weight down, while also increasing rigidity. With yet another nod to F1, the chassis is cured in the same place as Ferrari’s F1 cars.

Truly mind-boggling. In line with the battle that Ferrari and McLaren have most recently inflamed, the performance figures between the cars are close, but Ferrari, it seems, has pipped McLaren to basically every one — on paper at least.

Both cars with do 0-60mph in less than three seconds and will top at least 217mph. Those figures don’t quite do them justice, though; which is just ridiculous. The stand out figures are the 0-125mph (200kph) of ‘under 7 seconds’ and 0-186mph (300kph) of about 15.5. This second figure is a solid 1.5 seconds faster than the McLaren, though paper is a fickle thing and performance is only truly measured on the road, not on desks.

Around Ferrari’s famed Fiorano Test Track, the LaFerrari is a solid 5 seconds quicker than the Enzo, easily making it Ferrari’s fastest road car ever.

It’s a revolutionary car in every way, this LaFerrari, but by no means is it alone. Ferrari’s greatest rivals have also put on quite the impressive show. Porsche showed the world its 918 Spyder a fair while ago, and McLaren has just properly unveiled its P1. Both of these cars are hybrids, though all three take very different approaches to it.

The Porsche was the first to the punchline, but production is yet to be seen. Its design is understated, though gorgeous, especially with the short exhaust shooting out the top. It sports a naturally aspirated V8 churning out 570bhp and two electric motor — one at the front powering the front wheels, and another at the back helping the V8 with the rear wheels. Combined, the motors put out 270bhp. It incorporates a regenerative braking system, though different from Ferrari’s and something that has popped up on the new GT3: four-wheel steering. That could possibly give it the advantage over the Ferrari and McLaren, as well as the four-wheel drive, although no active aero seems to have been used.

The McLaren P1 is the closer rival in terms of performance and execution. It also features a thick lathering of active aerodynamics, but no regenerative braking. Instead it has a strange system that uses the electric motor to increase the efficiency of gear changes and power output to make the gear changes and driving smoother and quicker. It is the only one of the three that has a turbo, surprisingly, given Porsche’s extensive use of them.

Image: Ferrari, engines and other shots via 3D-car-shows.com 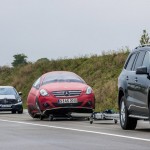