The by-line of this website is â€œBecause Cars Are Gadgetsâ€ and this phrase is particularly poignant in 2014 as the race for the connected car reaches fever pitch. We do after all spend particularly large portions of our time behind the wheel, and with lawmakers, both locally and internationally clamping down on the use of mobile technology in-car, the responsibility is now falling on car manufacturers to keep us ever connected, without breaking the laws of the land.

With CES 2014 now done and the dusted settled, now might be a good time to reflect on what if anything (automotively speaking) at this yearâ€™s expo, has actually shed any new light on the progress of the connected car.

A record nine manufacturers were present at this yearâ€™s Consumer Electronics Show, and that in itself is an indication of where automotive technology is heading. Most of the big players were there — Audi, BMW, Chrysler, Ford, General Motors, Kia, Mazda, Mercedes and Toyota — perhaps only the larger Volkswagen group was conspicuous by its absence (although it will working towards similar goals as the rest of this group behind the scenes).

Sure BlackBerry’s QNX is leading the game right now, but given the fortunes of its parent company, there’s good reason to suspect that won’t be the case forever.

Immediately Apple is at a disadvantage because of its well-known obsession with wanting to control the whole user experience (i.e. the whole path to purchase, the product and the operating system). Apple envisages its products seamlessly connecting to cars and displaying the operating system on available in-car screens, which is fine, the intuitive SIRI takes care of the hands free problem and Apple is happy. However, car manufacturers, who undoubtedly want their version of the connected car, to define their car, might have an issue with what is essentially an outside system like iOS taking centre stage. Queue much heated debate from both sides. Through this the driver can then operate SIRI hands free accessing your phone app, play music, compose and read text messages, use Maps and get directions, read notifications, find calendar info etc etc. However, this is not ground breaking. Connecting our phones to our cars is second nature, and while Appleâ€™s Eyes Free system allows more control and connectivity than before what we are yet to see is a fully integrated operating system like iOS or Android fitted as original specification.

Which brings us neatly to Android, and the recently announced Open Automotive Alliance which includes the likes of Audi, General Motors, Honda and Hyundai (and graphics partner Nvidia), who â€œall share a vision for the connected car, and are committed to collaborating around a common platform to make this vision realityâ€, as the official blog post announcing the deal states.

This is the first sign of a concrete link between car manufacturer and mobile operating system and the alliance, by way of a team effort so to speak, will accelerate the full integration of Android into cars. Will these manufacturers tie themselves exclusively to Google and Android? For now it would seem so, although this would leave the Apple fan club out in the cold and with Honda for example already working with Apple and the Eyes Free system, right now it looks like manufacturers are allowing themselves the freedom to play both sides. Itâ€™s hard to tell how this will all play out and is bit like political floor crossing — aligned with the left one day, hand on heart for the right the next.

One thing is for certain, the integrated car is coming and this can only be a good thing for consumers, in terms of connectivity and also safety, a fully integrated SIRI for example, where all functions can be operated hands free is certainly safe. But is this not a case of creating a problem for the express purpose of solving it?

One has to ask what we stand to gain by fully integrating our phones into our cars? Sure, we want to stay connected to the world, tweet, update Facebook and so on, but arenâ€™t these all distractions from the sole purpose of being in the car, which is driving it? Are radio stations and music not enough? Do we need more distractions on the road? Law makers would disagree, and in some parts of the world even drinking a Coke or eating a sandwich while driving is viewed as already too distracting, how will super mobile connectivity actually enhance the driving experience, whilst not being a negative distraction?

Is there a burgeoning market for car-specific apps? Yes, detailed trip analysis, fuel consumption, vehicle behaviour, speed and so on could be interesting to consumers, but I think one will bore of this quite quickly. You can bet though, that in a world where massive businesses have been built off the back of the App Store model, and have essentially changed the way we live our lives, I have no doubt, the very same will be the in-car operating system.

Of course there is a bigger picture here, and one would be naive to think differently. The connected car is the first step towards a new automotive future, which might ultimately culminate in driverless cars. However, before this can even remotely become a possibility, data needs to be collected, collated, processed, analysed and even sold. What does this mean for us as owners and drivers? Where you go, how far, how fast, which routes, how long you stopped, why you stopped, how much fuel you used will all become invaluable data, and in an age where data is king, it this data that is essentially fuelling the machine in the race for the connected car. 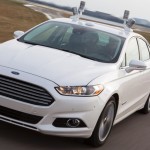