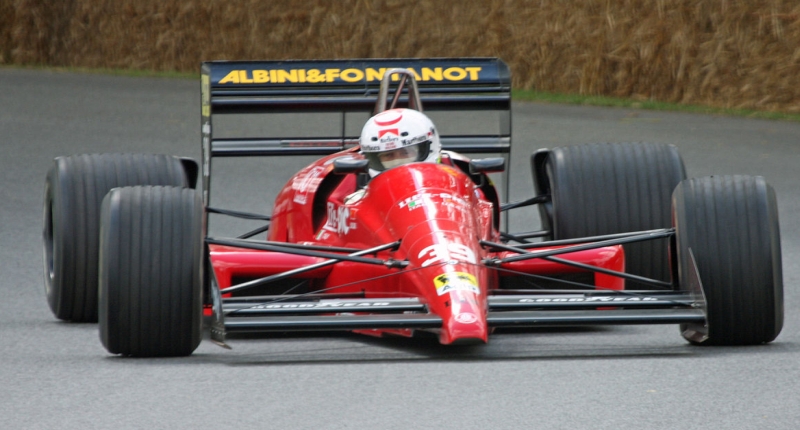 Since as far back as the invention of the wheel, humans have felt the need to travel faster and faster, preferably in competition with someone else.

In todayâ€™s world of Formula 1, this insatiable appetite melds both arcane methods of exploding fossil fuels, extraordinarily talented drivers and bleeding edge technology. Innovations are, and were never too far from the sport.

Thatâ€™s not to say all of these innovations were successful.

Life Racing Engineâ€™s 1990 season, for example, was a grave embarrassment. Everything about this team was a failure â€“ from the use of FIRSTâ€™s diabolical and cumbersome chassis, to their own custom-built engine. Although the team only had one chassis and two engines for the entire season, the performance of the engines were even more shambolic than their lack of preparation.

Although marvellous to look at and incredibly inventive, the three bank 3.5-litre W12 was severely underpowered. In fact, the car failed to pre-qualify for all 14 events it entered. On average, it was around 20 seconds slower than the next fastest car â€“ one can only imagine how much slower it was than the leading McLarens. 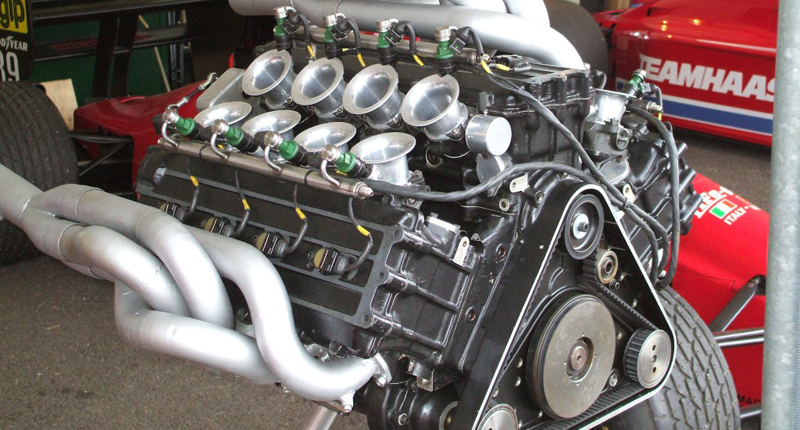 Even after the W12 was abandoned and replaced with Judd engines for the final two races, it remained morbidly listless. Life took its travelling circus elsewhere with two rounds left in the season, and they were never seen again. The W12 layout has never made an appearance in Formula 1 since. 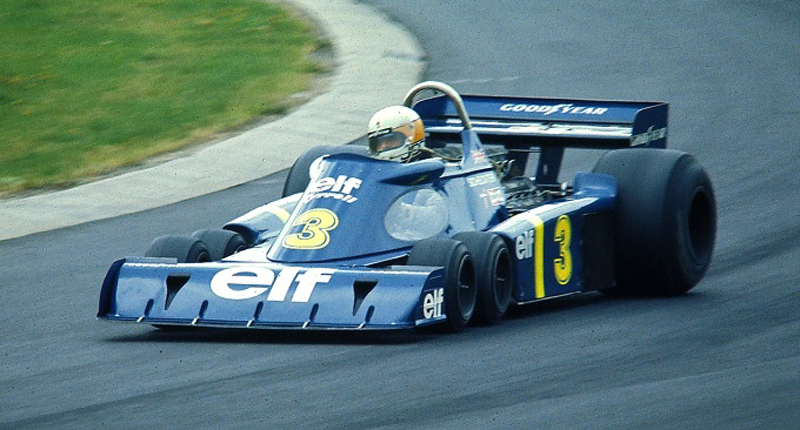 A more successful innovation was the â€œsix-wheeler,â€ pioneered by Tyrrellâ€™s Derek Gardner. The 1976 P34 featured four tiny steered-wheels at the front, with two customary drive wheels at the rear. Theoretically, the smaller four front wheels would reduce drag by sitting lower in the carâ€™s bodywork, while the increased contact area of the tyres would increase grip.

Unlike the L190, the P34 won one Grand Prix with Jody Scheckter at the helm, picked up 14 podiums and competed in 30 races before it was retired the following season. Tyre companies also refused to manufacture exclusive tyres for the Tyrrell.

In less successful endeavours, the six-wheeled Williams FW08B is often forgotten as it never raced, nor did the March 2-4-1. Even the mythical Ferrari 312T6 had four wheels fitted to the rear drive axle. It also, sadly, never saw the competitive track.

Although not an entirely failed concept, the novelty of six-wheeled cars in Formula 1 never took off en masse. The FIA has since changed the rules, pinning the number of wheels allowed to four.

Before more wheels were cool, the 1961 Ferguson P99 made the most of its four â€“ by sending drive to all of them. Ferguson remains the only manufacturer to win an F1 race with a four-wheel drive car, although that hasnâ€™t stopped others from trying.

The McLaren M9A is a beautiful example, coated in the iconic bright McLaren orange livery, but its handling was much worse than its appearance. 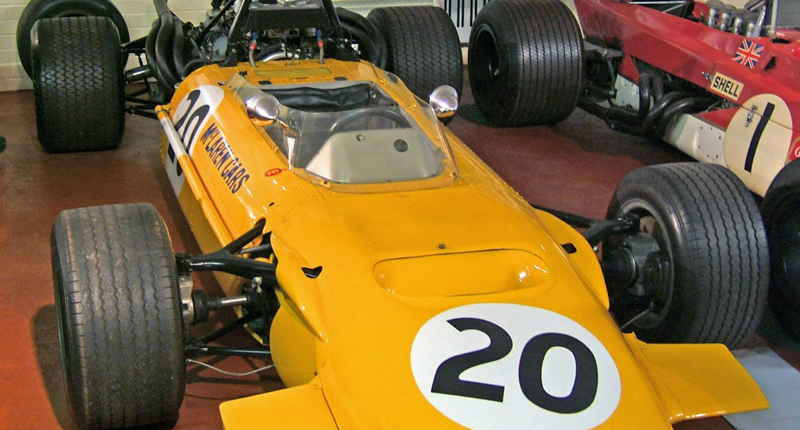 Even though all four wheels were driven — the notion supposedly introduced better road-holding — it was not competitive. The previous rear drive M7 series was much quicker and more successful.

Colin Chapmanâ€™s Lotusâ€™s 56B was revolutionary for more than just its four-wheel drive system. It featured a gas turbine power unit, no gearbox or clutch and also competed at the Indianapolis 500. Regardless of its beauty and strange whistle-like drive note, the car was uncompetitive in both Indy and F1.

If driving all four wheels was excessive and outlawed, what about steering all four instead? At least this was the design philosophy of Rory Byrne and Ross Brawn at Benetton in 1993.

Although a strange notion, they created a version of the B193 car featuring all-wheel hydraulically-assisted steering. Allegedly, it wasnâ€™t very good. In fact, their drivers, Michael Schumacher and Ricardo Patrese, preferred the system switched off.

The car never competed in any races and was only used experimentally when testing. Regardless, the FIA banned four wheel steering and any type of active suspension driver aids from 1994 onwards.

A season in the midst of the development chaos, the 1968 was important year in the progress of the sport as a whole. It was the season that finally saw the ridiculous safety standards (or lack thereof) improved, but also saw the death of a number of drivers beforehand.

It was also important in car development circles, seeing a number of new aerodynamic systems and appendages. These included high-mounted inverted wings. In the search for increased down force and higher cornering speeds, designers, especially Colin Chapman, were pushing both practicality and car safety to their limits, and often beyond.

The Lotus 49B had a rear wing suspended from thin struts miles above the car, mounted directly onto the suspension. These were soon banned after their high-profile failures on both cars at the 1969 Spanish GP, that luckily spared both Jochen Rindt and Graham Hill.

Winglets, on the other hand, are a relatively recent phenomenon.

Decidedly strange in appearance but highly effective in design, these devices were revived by Mike Gascogneâ€™s Tyrrell in 1997. Their “X-Wings” spread virally to most teams by the start of the 1998 season with Prost, Jordan and Sauber the first to duplicate the idea. Later, Ferrari would implement their own version at the 1998 San Marino GP, which made the car look absolutely hideous.

They reappeared at the 2001 Monaco GP thanks to Arrows and Jordan in practice, who mounted theirs directly in the driverâ€™s line of sight — a stupidly hazardous design. The devices were promptly banned after just one practice session and were never used again. 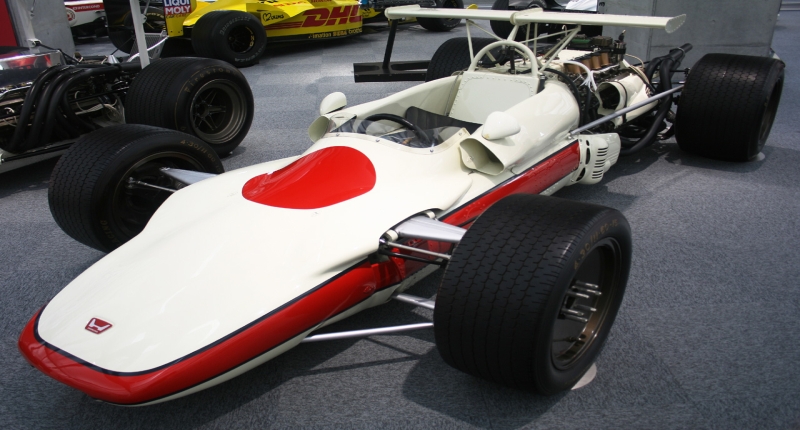 The 1968 Honda RA302 was a revolutionary car for the era. The first air-cooled machine (the standard cooling system in modern F1) also featured a magnesium monocoque. Magnesium, while a comparably much lighter metal and therefore perfect for racing applications, also has its drawbacks – it is highly flammable.

The RA302 was however allowed to race â€“ safety was regrettably not at the forefront of automotive design in the 1960s, even though John Surtees refused to race the vehicle. On the carâ€™s debut, the Frenchman Jo Schlesser at his home race, lost control after just two laps. The car, still carrying a race load of fuel, hit a bank and practically exploded.

Subsequently, the RA302 never raced again, but how it was allowed to race after the 1955 Le Mans disaster’s magnesium fire is completely unfathomable.

8. The current breed of hybrid engines 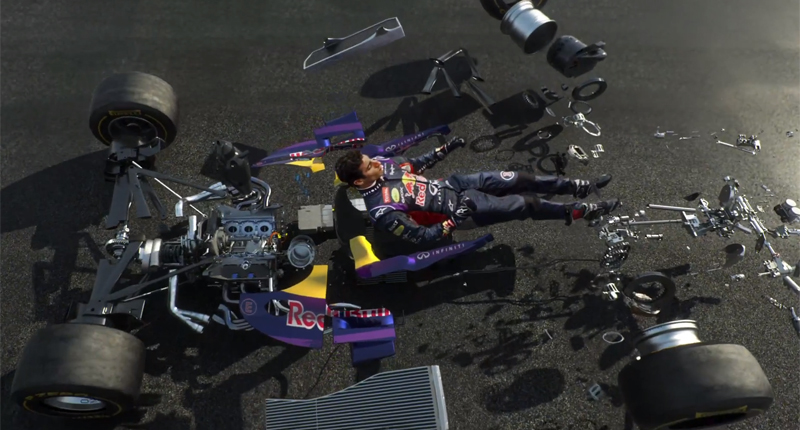 After three tranquilly quiet Grands Prix this year, F1â€™s high and mighty are making a noise, about the lack of noise. The current power trains are, allegedly, a failure, because theyâ€™re just too â€œquiet.â€

Whether anyone thought that this would ever be a problem in F1, is a story in itself. Nevertheless, the much smaller and more relevant turbocharged 1.6 L V6 hybrids rev so much lower than the naturally aspirated V8s they replace, they fail to generate the same level of apparent shrill. On downshifts, fans get a few huffs and whirrs from the turbo and energy recovery systems, but otherwise, the units produce less noise than previous power trains.

But why should this be a massive concern?

The Australian Grand Prix Corporation is threatening to sue the Formula 1 rights holders for breach of contract, which is ridiculous if you take into account the cityâ€™s noise complaint from the event a few years prior.

In the past, fans complained that the V8s were too quiet after they replaced the V10 era.

Essentially, the higher revving, larger displacement engines bowed out due to pressure for greener racing, not because they were failures. F1 has traditionally been the breeding ground for great technological innovations. Where better to trial hybrid engines in the fast-paced development world of F1?

Whether the FIA will increase the allowed fuel flow rate or allow engine manufacturers to tweak the exhausts, will remain to be seen. But thereâ€™s never any real certainty on the future of F1.

Innovation and rule changes, although necessary, are hit and miss most times, but itâ€™s the invention â€“ regardless the failure or the succession – that renders such attempts admirable. 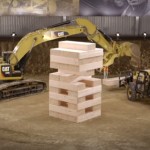