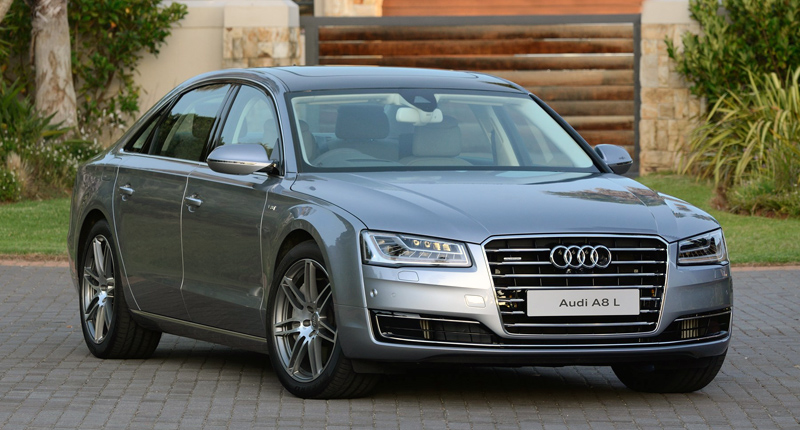 The latest generation Mercedes-Benz S-Class â€“ boasting heaps upon heaps of staggering tech and lavish luxury â€“ arrived on the scene with all the subtlety of a limo-shaped sledgehammer.

This is THE ultimate luxury saloon, the motoring world swooned, instantly seduced by the swoopy Mercâ€™s brilliance in virtually all areas. Trademarked terms such as â€œMagic Body Controlâ€ and â€œDistronic Plusâ€ rendered technophiles weak at the knees, while even full-bore petrol-heads were left nodding in approval at the range of tasty engines on offer.

Meanwhile, somewhere in Ingolstadt, a bevy of bespectacled boffins at Audi kept their collective heads firmly down, quietly going about upgrading their flagship saloon with a few choice enhancements. Yes, the under-the-radar A8 has been given a welcome update â€“ even if it looks virtually the same from the outside as before (look very closely and you may notice the changes made to the bonnet, grille, bumpers, headlights, tail-lights and exhaust exits).

But whereas the sixth-gen S-Class was unveiled as an all-new vehicle, the latest version of the A8 is in truth little more than a mid-cycle refresh. Can it still play hardball with the segment benchmark that is the S-Class?

Well, in this long-wheelbase form, with a brawny turbo-diesel V8 tucked under the elongated bonnet, the Audi A8 certainly makes a strong case for itself. It may struggle to match the Mercedes in a full-scale tech war, but this particular diesel mill is hard to beat thanks to an almost ideal mix of refinement, flexibility and out-and-out pace. Yes, the 4134cc oil-burner churns out 283kW and a monstrous 850Nm â€“ the latter available from 2000rpm to 2750rpm. And thatâ€™s enough to propel the stretched A8 from standstill to 100km/h in just 4.9 seconds, with Audi claiming a remarkable combined fuel economy figure of just 7.5 litres per 100km (we ended up on 10.6). The eight-speed automatic transmission, meanwhile, is as smooth as a chauffeurâ€™s freshly pressed trousers, shifting swiftly and perfectly in line with whatever mode happens to be chosen via the standard drive select system. Paddle-shifters are included, although they are rarely put into action.

Of course, any self-respecting luxury car owner would prefer to hand the driving task to an underling, opting instead to stretch out on the incredibly spacious rear bench and put the entertainment system â€“ which includes a DVD changer, separate hard-drive, two tablet-like displays (mounted on the seatbacks) and Bluetooth headphones â€“ to appropriate use. Even the navigation can be fully controlled from back there, while a nifty massage function is available as an option. The cabin itself is swathed in top-quality materials, from sumptuous leather to Burr Walnut inlays on our test model. Itâ€™s typical Audi stuff, but with the quality turned up a notch or two more than usual, befitting the A8â€™s position at the very top of the German manufacturerâ€™s automotive food-chain. The MMI control element mounted on the centre console â€“ which weâ€™ve sampled in many other Audi models â€“ brings a touch of familiarity to the cockpit, and includes a touchpad allowing the driver to draw characters to control certain navigation and multimedia functions.

Thereâ€™s plenty more standard-yet-nifty tech, of course, including Audi Connect, which uses an integrated UMTS module to link the vehicle to the internet. This allows passengers to browse online and email via a WLAN hotspot. And thatâ€™s not all: for the driver, the system facilitates handy services such as Google Earth and Google Street View. A 360-degree parking camera â€“ which is very useful when manoeuvring a vehicle that measures very nearly 5.3 metres in length â€“ is also standard equipment on this model, as is adaptive air suspension, power closing doors, four-zone climate control, panoramic sunroof, electrically operated tailgate, and an electric sunshade for the rear window. The A8â€™s audio system is of the Bose variety â€“ although our test vehicle boasted an optional 19-speaker Bang & Olufsen version â€“ and is linked to a handy music interface.

The 4.2 TDI model features exceptionally comfortable 22-way adjustable front seats with both heating and ventilation functions, as well as tasty 20-inch alloys, a dynamic steering system and a rear sports differential. The latter, together with Audiâ€™s trademark quattro permanent all-wheel drive and a decent weight-loss plan, helps the A8 handle the bends far better than it should. Particularly considering how comfortably it rides.

An optional extra worth looking at â€“ even if the price makes oneâ€™s eyes water â€“ is the Matrix LED headlight system. Our test model boasted these nifty lights, with a high-beam made up of twenty-five light-emitting diodes per unit, each of which can be switched on and off â€“ or even dimmed â€“ individually, depending on the driving situation. This means the headlights automatically react to other vehicles, while always illuminating the road in the best possible way. Remarkably, the system analyses predictive route data from the navigation unit â€“ recognising curves and road classifications â€“ and adjusts its distribution of light in response. The new headlights also feature an intelligent cornering function, a fresh daytime running light signature and dynamic turn signals that â€œswipeâ€ in the direction of intended travel.

Verdict: The refreshed Audi A8 canâ€™t match the Mercedes-Benz S-Class in terms of pure hype. But, rather strangely, thatâ€™s its strength. Where the big Merc is flashy and even somewhat of an exhibitionist, the A8 cruises under the radar, preferring to be subtle yet entirely special. Thereâ€™s more than enough tech to keep us happy, even if â€“ as usual â€“ the best bits are optional. And the utterly refined 4.2-litre lump powering all four wheels is one of the finest big diesel engines around, helping to make the Audi A8 L 4.2 TDI a wonderful place to spend oneâ€™s time â€“ whether itâ€™s from the driverâ€™s seat or the uber-comfy rear bench. 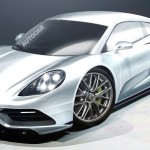