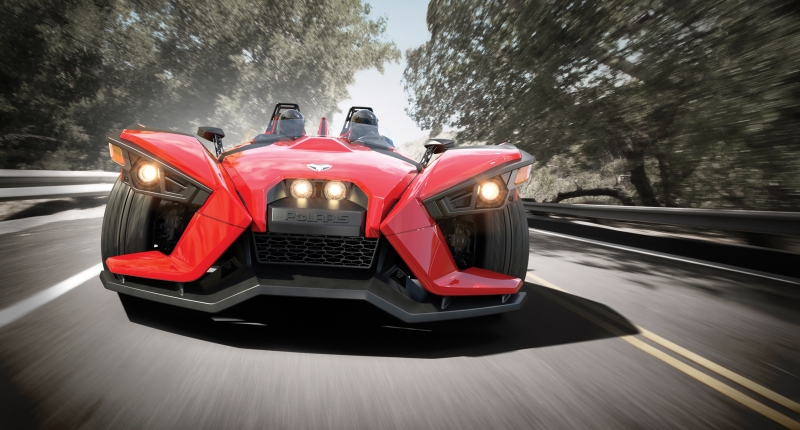 It’s difficult to describe exactly what Polaris has built here. Some say it’s a roadster, others a trike. Allusions are even made to Ariel’s Atom, presumably without all wheels properly attached. Frankly, we’re not quite sure. The booming company is known for its snowmobiles and ATVs, but it’s latest machine, dubbed the Slingshot, is as adept at tracing tarmac as a go-kart.

Straight out of Minnesota, the Polaris Slingshot is a roadster-cum-trike-cum-excite bike and, allegedly, a surfboard too. According to one poetic reaction comment in the promo video, driving the vehicle is like “surfing asphalt.”

Such a puzzling notion is perhaps all one needs to understand this vehicle. The three-wheeled, roadgoing Batman Tumbler has two at the front with one massive roller at the rear. According to Gizmodo, it’s essentially a road-legal motorcycle in America, but it has the interior and controls of a car, complete with dashboard, steering wheel and LCD screen.

The low-weight-high-power philosophy harks back to the Ariel Atom’s motto, a formula that makes the little car a pleasure (or nerve-jangling fear monger) to drive. While lugging around a kerb weight of over 780kg, the four-cylinder 2.4-litre engine from General Motors produces 173 horsepower. Sure, it sounds measly, but due to the Slingshot’s low weight, it promises to scamper off into the distance like a startled deer.

Drive flows through the rear wheel and is controlled via a 5-speed manual gearbox. It also comes with most human in-vehicle aids though — traction control especially — but these can be switched off to a degree.

As for being a surfboard? It’s about as cheap as one. Starting around US$19 999 and working up to US$24 999 for the big boy, it seems like a reasonable price for three-wheeled fun. We’re not sure when (of rather, if ever) it’s arriving on African shores, but if you’d like a taste of Polaris’ latest adventure starter, have a view at the video below. 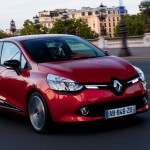