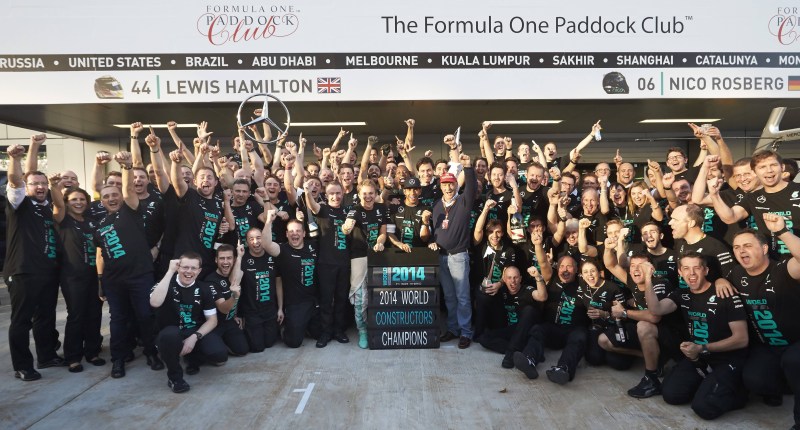 Another weekend where motorsport series came to the fore, there were, quite literally, too many to watch. From events taking place in Russia, Australia, Japan and the U.S., there was something for everyone really.

Formula 1 rolled onto Sochi, MotoGP tackled Motegi, Aussie V8 Supercars were at Mount Panorama, and the World Endurance Championship was at Fuji. But perhaps the most laugh-inducing event was the NASCAR Sprint Cup round at Charlotte, North Carolina, which turned into a mixed martial arts matchup post-race and a short-tempered affair during.

It was an absolutely epic weekend of motorsport action.

But let’s not dally about, here are the seriously awesome moments you might’ve missed this weekend. Although Lewis Hamilton romped to victory once again, capping what has been a rather great ten days for the Mercedes man, it’s Mercedes itself that was celebrating. The team locked up its first ever Constructors’ Championship under the Mercedes name (previously, the team from Brackley, UK has won the Championship, but under the guise of Brawn GP).

The team now has an unassailable lead over Red Bull, Williams and Ferrari, with McLaren bearing down on the latter.

In other news, Lewis Hamilton dedicated his win to Jules Bianchi, who’s still in hospital. And on that note… Sochi’s bow into the Grand Prix circuit fraternity was largely overshadowed by Bianchi’s absence from the paddock, and Vladimir Putin’s arrival about halfway through the race.

But while political interference was keeping some mildly entertained, the track layout didn’t inspire anyone — perhaps only Hamilton. It’s fast, it’s sweeping yet it’s utterly boring and reduced many fans to tears. Marussia also paid respects to Bianchi by running with Max Chilton‘s car alone. This, if anything, was a massive show of respect, especially for a team in its home race at the country’s debut Formula 1 GP. Frankly, I’m not sure if anyone cared about Russia and its GP. At 21-years of age, one thing many of us weren’t doing was racing prototype motorcycles competitively. Marc Marquez however, has now won two top-flight Championships back-to-back.

Although he didn’t win at Twin Ring Motegi, he claimed a second place at the Japanese GP, which gave him an unassailable lead over his teammate Dani Pedrosa, and the chasing Yamahas of Valentino Rossi and Jorge Lorenzo.

4. Ducati claims first pole since 2010, Lorenzo picks up the pieces

Although the Ducatis definitely turned up for pole position on the Saturday, with Andrea Dovizioso setting the fastest lap on the day, it was Jorge Lorenzo who claimed the victory. It was, however, the first pole position for a Ducati rider since 2010.

Dovizioso eventually finished fifth behind the Hondas and Yamahas. Does this mean Ducati will be racing with the big boys again next season? We hope so.

5. Chaz Mostert wins bonkers Bathurst 1000 from last on the grid

There’s only one world to describe this race — epic.

I tend to say this every year, but year after year Mount Panorama throws up another surprise that Hollywood’s best scriptwriters couldn’t conjure. And this year’s Bathurst 1000 was so full of drama, it was hard to keep up.

Chaz Mostert (partnered with Paul Morris) began Sunday’s great race stone last on the grid.Â Shane van Gisbergen started on pole, and was set to take the flag, but stalled his Holden in the pits with just 11 laps to go. Craig Lowndes and Mark Winterbottom were on an ailing and leading Jamie Whincup‘s tail, but those two tangled which gave Chaz Mostert a miraculous chance to take the win.

With two laps to go, Whincup had a three second lead and even less fuel over Mostert. But with just five corners to go, the 22-year-old Mostert took his chance. Incredibly, the first lap he led was the last, becoming the first man to win the Bathurst 1000 from the last position on the grid.

And that’s not all. This year saw a record 10 Safety Car periods and a red flag which required part of the circuit to be repaired. An incredible story. It’s quite rare to see the results of a World Endurance Championship event without an Audi in the top three, but this was the case at Fuji this weekend. A Japanese track known for it’s beautiful view of it’s mountainous namesake, and it’s rapid change in weather, it was also the team’s home race. Audi on the other hand, looks homesick.

After a bonkers first lap which saw Audi, Porsche and Toyota in an almighty scrap for first, the TS040 eventually got the upper hand, staving off its rivals for the rest of the race. Anthony Davidson and Sebastian Buemi won the race, followed home by the three-driver sister car of Alex Wurz, Kazuki Nakajima and StÃ©phane Sarrazin. The Porsche of Mark Webber, Timo Bernhard and Brendon Hartley finished third, while the two Audis came home in fifth and sixth.

“Out of control” is a phrase that’s been passed around quite a bit this weekend, and well, that’s exactly what this weekend’s NASCAR event was. Although Kevin Harvick won the race, booking him a place in the Eliminator phase of the Chase, that was soon forgotten after all the antics.

Brad Keselowski bumped both Denny Hamlin and Matt Kenseth on the slow down lap, and then accidentally hit Tony Stewart while attempting to ram Kenseth again. Steward, enraged, deliberately reversed and rammed Keselowski himself — all this just outside the pitlane. It’s was pandemonium, but it didn’t end there.

Kenseth and Keselowski continued their fued in the paddock, trading fists instead of fenders which made the NASCAR faithful squeal in sheer delight.

Although European racing series (yes you, Formula 1) would have none of this, this is brilliant for a sport wishing for a more diverse and dedicated audience. The Chase format’s entire purpose was to attract a higher TV audience, and it’s largely paid off even if at the expense of drivers who should really be in the final showdown.

The video above has been viewed nearly 100 000 times more than others on NASCAR’s YouTube Page. And you know what? Talladega Superspeedway is next on the calendar. 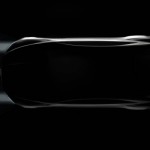