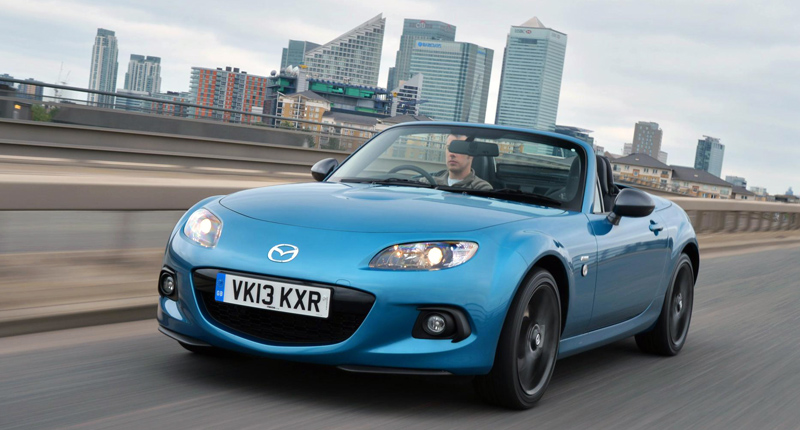 Pootling around with the roof down is usually regarded as a shameless display of opulence.

â€œLook at me! Iâ€™ve got more money than you!â€ the smug-looking chap behind the wheel may as well shout as the wind whistles through his most likely thinning hair.

But this doesnâ€™t always have to be the case.

No, if youâ€™re prepared to look around — and even compromise on the definition of the word â€œcabrioletâ€ to a certain extent — there may just be a brand new soft-top within your financial reach long before your hairline starts to recede.

Sure, these entry-level options arenâ€™t the flashiest or the most powerful rag-tops around, but they still serve up generous helpings of open-air fun. There’s also the massive upside that people won’t assume you’re about to embark on an affair with someone half your age.

And, crucially, theyâ€™re the cheapest options out there. 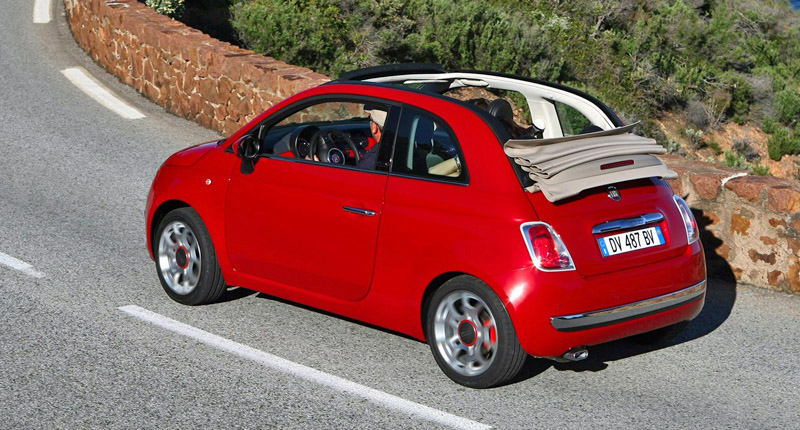 This plucky little Fiat isnâ€™t a convertible in the strictest sense of the word. You see, the Fiat 500C makes use of a sardine-tin-like folding roof â€“ with the canvas concertinaing over the boot — rather than a full-blown soft-top. But the retro 500C has a more-than-adequate excuse: its roof design mimics that of the original Fiat convertible from way back in 1957.

Thereâ€™s just one engine on offer, although it can be had with either a five-speed manual gearbox or a five-speed automatic transmission. The 1242cc four-potter makes 51kW and 102Nm, which results in a decidedly tardy scurry to 100km/h of 12.9 seconds. Interestingly, the diminutive 500C has as many as seven airbags. If you think retroâ€™s cool, this is the one for you.

The second-cheapest new open-air motoring experience in South Africa comes in the form of the canvas-topped CitroÃ«n DS3 Cabrio. But bear one thing in mind: this pretty little French car is technically not a cabriolet at all â€“ just like the Fiat 500C above. You see, both the B- and C-pillars remain firmly intact and the doors keep their frames as well. This layout means that the soft-top functions more like a massive sunroof â€“ closing fully in around 16 seconds â€“ than an actual convertible.

The benefit, of course, is that the DS3 Cabrio retains pretty much all of the structural rigidity of the hatchback on which it is based, and tips the scales at just 25kg more than its hard-top sibling. Performance, therefore, is hardly affected, even with the basic 1.2-litre three-potter whirring away under the bonnet. Oh, and youâ€™re less likely to find bugs in your teeth after a quick blast along a country road. Crave more power? Consider coughing up for the range-topping 115kW derivative. 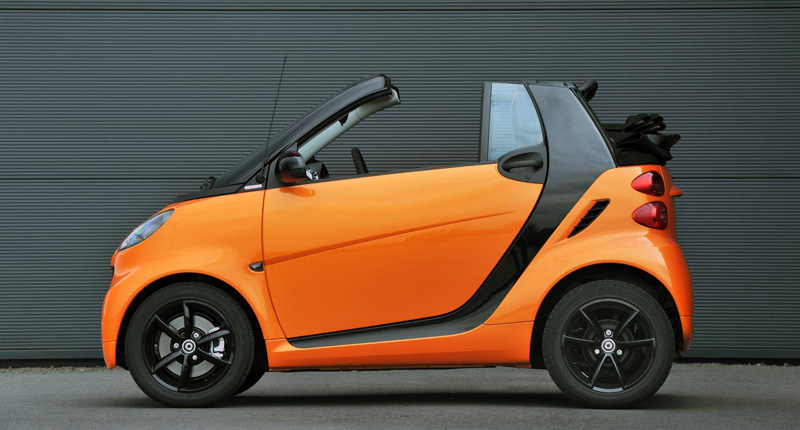 Yes, itâ€™s tiny. And, yes, itâ€™s a Smart. But itâ€™s still a cabriolet. And itâ€™s rear-engined and rear-wheel drive. The 999cc turbocharged three-cylinder petrol unit under the bonnet is green enough to dodge the countryâ€™s emissions taxes, yet nippy enough to allow the driver to have some fun around town. Since this little thing weighs just 800kg, the turbo-tripleâ€™s maximum output of 62kW is more than sufficient.

And, despite the sub-R250k price-tag (and limited interior space), this two-seater model is full of standard features, including electric windows, cruise control, air-conditioning, rain-sensing wipers, an automatic gearbox, full audio system, and 15-inch alloys. There are also four airbags, traction control, stability control and all manner of safety abbreviations. However, you may want to look elsewhere if you spend a vast amount of time driving on highways â€“ the little Smart isnâ€™t exactly comfortable at the national limit. 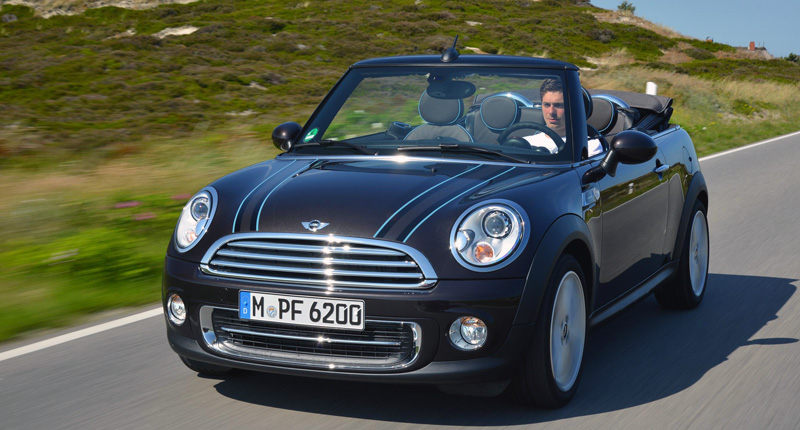 Okay, so here things start to become a little more expensive. Yes, the entry-level convertible MINI â€“ the first in a ten-model range â€“ comes in at over R320k, which may make your eyes water. But at least itâ€™s a pukka convertible, with a decent-sized engine to boot. The base model employs a familiar 1.6-litre naturally aspirated petrol unit (linked to a six-speed manual â€˜box), which provides a fair balance between oomph and economy.

And itâ€™s unusually refined, boasts a great little chassis and should hold its value well, too. Keep in mind, however, that a new version â€“ based on the vastly improved new MINI Hatch â€“ is just around the corner. Oh, and if you require better out-right acceleration (and donâ€™t mind splashing quite a bit more cash), there are also a couple of John Cooper Works derivatives available. Yes, please.

The topless Volkswagen Golf certainly isnâ€™t cut-price. But, simply because itâ€™s a Golf, itâ€™s arguably a more complete vehicle than any other on this list. In short, this cabriolet offers almost everything â€“ from superb refinement to surprising practicality â€“ that its hard-top siblings do, just with added sunshine in the cabin. But bear in mind that it shares its bits and pieces with the Mk6 on which it is based, rather than the even more polished seventh-generation Golf.

The base model uses a 1.4-litre turbocharged petrol engine â€“ another rather familiar powerplant â€“ which sends 90kW and 200Nm to the front wheels. Rather interestingly, the Golf cabriolet also boasts an electronic diff-lock on the front axle, as well as niceties such as cruise control, rain-sensing windscreen wipers, a flat-tyre indicator and an electro-chromatic rear-view mirror.

Such a list wouldnâ€™t be complete without the admittedly ageing MX-5 (thankfully, though, it shouldnâ€™t be too long before the next-gen model touches down). Yes, the worldâ€™s best-selling roadster is still alive and kicking, albeit at a somewhat lofty price. Thereâ€™s just the one free-revving model available, and it employs a naturally aspirated 2.0-litre petrol engine churning out 118kW at a high 7000rpm (peak torque, meanwhile, is a little disappointing at 188Nm).

But, crucially, drive is sent to the rear wheels via a six-speed manual transmission, which makes for an engaging drive. And the roof? Well, this one boasts a retractable hard-top. So, it may be the most expensive offering on this list, but the two-seater Mazda MX-5 is also the purest. And we simply canâ€™t wait for the fourth generation to arrive. 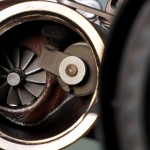