By Andy Walker, former editor
Read nextAudi RS7 aims to show that autonomous driving doesn’t have to be boring 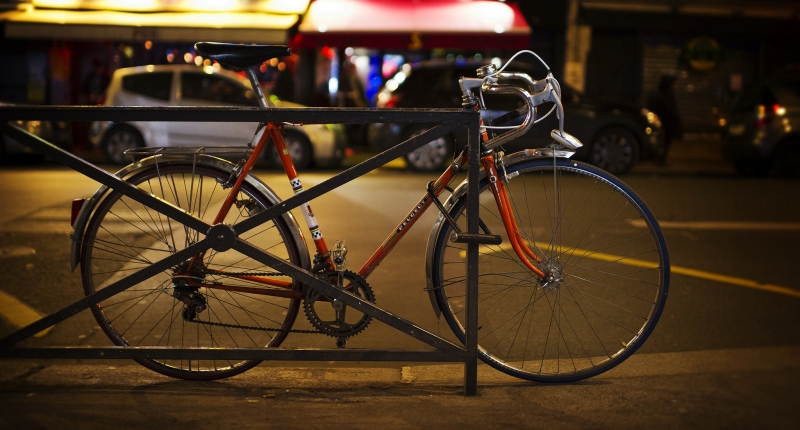 The Evolution of the Motorbike takes look at how the humble motorcycle has evolved over time, from the early concepts to the present, and what lies beyond. In the first edition of this nine part series, we look at the technical underpinnings and historic progression of the motorbike’s greatest predecessor — the bicycle.

For standing on two thin wheels, the motorbike as we know it has a staggered and layered past. From its initial timid conception back in the mid 1800s to its current ubiquity, it has become one of humankind’s principle forms of transport and leisure.

To understand the concept of the motorbike though, one must first delve into the bike’s predecessor — an unpowered, unmotored, pedal-pushing people carrier. For those who were hoping to hear some menacing turbocharged V8 grumble, bear with me.

Our journey begins in the fifteenth century.

Was this Da Vinci’s revolution?

The first known appearance of the concept of a bicycle in literature or sketch appears in the works of Leonardo Da Vinci’s pupil, Salai, back in the late 1400s discovered only recently. This is often debated though — some believe Da Vinci himself to be the original author, others criticise the work suggesting that Da Vinci hadn’t actually built the machine. Hilariously, some also believe that the doodle was the result of a particularly bored Italian monk, that inscribed the image during the 1960s.

Below is the concept constructed per specifications laid out by “Da Vinci”. Regardless, whether it was a flurry of genius from a holy man or a moment of madness from a genius, the bicycle as modern society knows it at least, was birthed in the 19th century.

Baron Karl von Drais (German by name, and an incredibly intelligent bloke) popped up with an invention that embodied the bicycle in its stripped down modern form, except there were no pedals or chains. The laufmaschine (translated literally as the “running machine” or dandy horse, thanks to Drais’ peculiar sense of humour) required riders, back when 1817 fashion was way too elaborate to render this method efficient, to push the vehicle along with an outstretched leg.

It was essentially the world’s first fitness machine, and allowed the riders to glide along walkways more efficiently than trudging alongside their two-legged and less fortunate counterparts. Of course, like many things back in the 19th century (except perhaps coal), it became a fad faster than it could trolley people around. In the Thirties however, the Scots got hold of the idea and made their own example of the bicycle, or velocipede as it was commonly known back then, but their concept wasn’t quite the shining light that the industry needed.

In the year 1865, someone finally asked the question: “Why don’t we put a pedal on one of the wheels for power?” It was a moment that clarified what the bicycle was to become — an easily operable and efficient mode of transport, without any dangling body part flailing out of the machine. It also had wheels of equal size, unlike McCall’s concept, which featured a larger rear wheel (or front wheel, if you were riding it incorrectly).

Although the peddled hobby horse seemed practical, the cobbled streets of European cities underneath the all-wood body (that includes the wheels) made for a ride harder than a Yugo GV falling off a cliff. It thus earned the name, the “Boneshaker”. After teeth were littering the streets of London, the bicycle’s development took various turns. The larger rear-wheeled designs of old found precedence in newer models being produced in England. They were dubbed “Penny Farthings” thanks to the resemblance of the wheels to England’s monetary system. They’re primarily used for comedic effect or performance arts in today’s world, probably because getting down from one requires the agility of a squid.

Still largely novelty items, the large rear-wheeled crafts were advantageous for those with long legs and designers, who could use less material in the bicycle’s overall construction. Somehow, even that wasn’t quite the technological sweet spot engineers were hoping for.

But that changed rather swiftly.

Arguably, 1880s “safety bicycle” was the biggest advancement in two-wheeled transport since the hobby horse was developed, and it would become the ostensible and philosophical framework for current bicycles and engined motorbikes succeeding them. Essentially, it’s the bike we know today — the pedals are mid-mounted beneath the users’ seat, with a gearing system driving the rear wheels (essentially, motorcycles mirror this philosophy with the engine mounted in the centre of the machine). It was completely different to the front-driven philosophy of old, and allowed the user to have more control over the device’s speed and trajectory thanks to improved weight distribution. It wasn’t exactly “safe” though, but it did improve user safety quite substantially compared to sitting on planet-sized wheels.

Developed by John Kemp Starley, the bicycle featured equally-sized wheels, which made for a more stable journey. It was more stable, more practical and well, flat-out more sensible.

The bicycle’s development essentially escalated from there. The safety bicycle became the principle human-powered form of two wheeled transport, and interestingly, when humans finally decided to strap an engine to it just prior to the turn on the 20th century, the safety bicycle and the motorbike shared many commonalities. Indeed, the bicycle itself hasn’t changed much since its (possible) 1400s design.

To draw a very long story to an abrupt close, it was ultimately racing that pushed bicycle development (and in turn, motorbike technology) above and beyond what was needed. Modern racing bikes are constructed used carbon fibre, teflon and other incredibly light yet starkly strong substances. The average racing bike can set professionals back a good US$100 000. The bike Lance Armstrong rode for most of his career — the Trek Madone — retails for around US$160 000 — about the price of two-and-a-half Mercedes C63 AMGs. The performance in the right hands is highly admirable though — just have a look at the riders of the Grand Tours every summer and the ridiculous speeds they reach up- and downhill.

But with this racing mentality firmly in place well before the motorbike became a fixture, it was only a matter of time until humans desired to travel a little more quickly on two wheels. That’s probably when someone muttered from the back of a garage: “You know what, lads. We need an engine!”

In the next edition of our foray into the depth’s of the motorbike’s history, we’ll take a look at the first examples, what powered them and what were some of the first technologies used.