There was a very brief period in the early years of the new millennium when Citroen, always a benchmark for automotive innovation, produced boring cars. Thankfully that period seems to be behind it. The DS3 and DS5 showed that it could make small cars that were also design statements and now with the C4 Cactus, it’s done the same in the crossover segment.

I recently got to spend a little time in car, which we named one of our most innovative of 2014, and can confirm that it’s even more fun to drive than it is to look at.

Whereas most small crossovers, led by the likes of the Nissan Juke, look like hatchbacks that have spent a little too much time at the gym and are wearing platform shoes, the C4 Cactus appears to have taken a much softer approach.

Sure the ground clearance and roof racks suggest that you could easily use the Cactus to get to your favourite kayaking spot, but everything else indicates that you’d do so at a sensible speed with a grin plastered across your face.

That’s not to say the styling’s not bold though. It is. No one will think you’re driving just another McCrossover if your pull up in the Cactus. Like every good Citroen, it sticks out.

But even its most striking features seem designed to reassure you in some way. Take the Airbump panels for instance. Although they look like chocolate bars, the air-filled pockets of felxible plastic are designed to stop you having to go to the panel beater if someone comes up against your car with a trolley and to remove the fear you feel every time you park to close to a pillar in a multi-storey car park. This may be more of a reflection on me than on the innovation, but I spent a solid couple of minutes playing with the Airbump panels on the day I met the Cactus.

Even the solid feel of the doors, I suspect, is designed to put you at ease.

Perhaps all that reassurance is designed to stop feeling technophobes feeling scared upon entering the car.

Okay, you might not be able to unlock the C4 Cactus with your smartphone, but you still have to come to terms with a digital instrument panel and the chunky touch screen in the middle of the centre console, which controls most of the car’s functions.

Get beyond that though and you have a comfortable cabin with plenty of headroom and good all-round visibility.

There are, of course, nods to Citroen’s design ethic all over the place from the flat-topped bubble grip cubby-hole to the angular gear stick.

Turn the keys though, and it starts. That’s it. A spinning disco ball doesn’t appear out of the roof lining, choristers don’t pop up in the back seats, and pigs don’t fly. That’s good, because when you spend as long on the cusp of innovation as Citroen has, it’s easy forget that actual people drive your car.

I only managed to drive the C4 Cactus in traffic, but given how much time we all spend in the stuff that’s not necessarily the worst thing.

For the most part, things were pretty sedate. I didn’t feel the urge to “burn” anyone at a traffic light, or to pretend-stare at a camera while rapidly changing gears. That said, with the top of the range C4 Cactus packing a 1.2 litre turbo engine — pushing out 81kw — there’s plenty enough zip to get you from one side of town to the other before your favourite show starts.

The recommended gear changes were pretty spot on, which is more than I can say for a good couple of cars I’ve driven.

The stop-start system, which is a help to your petrol tank, is also ridiculously easy to use. And if you’re averse to using the handbrake at intersections, no matter what, you’ll be pleased to learn that the hill-start assist works pretty damn well too.

We’re looking forward to giving the C4 Cactus a proper drive and a more thorough review in the near future. 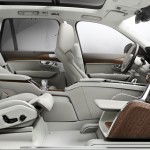