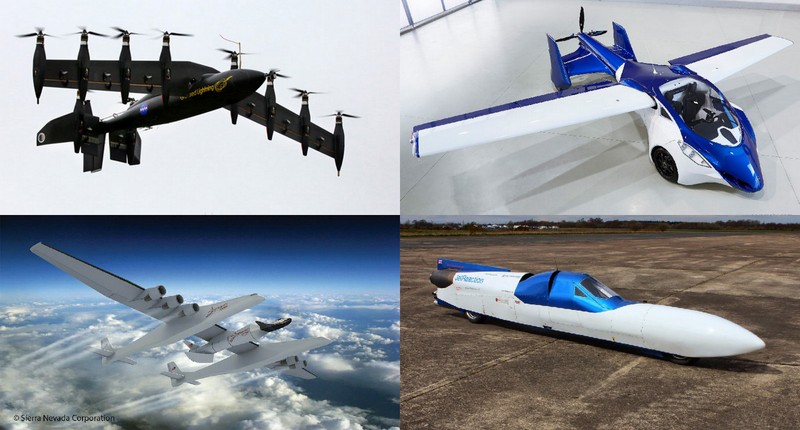 People, the future is upon us. Everything that seemed like a distant dream, only spoken of in books and fantasized about in films, is rapidly manifesting into reality.

If the endeavours in this article are to be successful we will soon have a world filled with jet bikes and flying billionaires.

Well read on and see some of the fantastic but surreal vehicles that currently being worked on.

Read more: Here’s everything you need to know about the enormous Roc space plane

The engineers at NASA are currently getting pretty creative by prototyping a 10-engine drone copter that that has the ability to change into an aircraft in mid-flight.

The big-brains at NASA have been working on the The GL-10 (a.k.a. Greased Lightning) for several months now and after experimenting with various shapes and sizes of models (and a few hard landings later) they think they have finally perfected their design. The present model (28kg with a 3.05m wingspan) is able to take off and hover as a copter, change into an aircraft mid-air and back, and safely perform a soft landing.

The exciting part is that this drone prototype is just being built to test the concept in a cost effective manner. The engineers are actually planning to build this design on a much larger scale that could potentially carry up to four passengers.

A scaled up version, much larger than we are testing now, would also make a great one to four-person-size personal air vehicle says Bill Fredericks, one of the main aerospace engineers working on the project.

I hope you’re right Bill, the future is counting on you. The Jet Reaction, a new “jet bike” being built in Britain, will attempt to break the land speed record for a two wheeled vehicle later this year. I must say their chances are looking pretty good as this bike looks like something straight out of a science-fiction movie.

The current land speed record for a motorcycle is 605.69 km/h, set by the American Lawless Electric Rocket Bike back in 2010. The British built vehicle will aim to beat that by almost 40km (644 km/h).

The initial speed test will take place between May 23 and 25 in the UK with the official record attempt taking place at the Bonneville Salt Flats in Utah, USA sometime in September.
They have chosen this location and time of year because the flat ground and dry air conditions increases the its probability of breaking the record, in terms of air resistance, and reducing the chances of it turning into a high speed fireball.

We’re all just praying Mother Nature plays ball and leaves us with a nice dry, smooth surface on which to operate, says Richard Brown, designer and engineer of the jet bike.

The Jet Reaction bike is just over 6m long, weighs about 560kg and is powered by a modified helicopter engine. It also won’t be the only team attempting to set a record and will compete against five other American teams.

Whatever the outcome of this attempt, it is clear that we are rapidly speeding towards technologically advanced future. We’ve already written about this monolithic monstrosity of a space plane, dubbed Roc after the Middle Eastern bird of prey, so we are assured it deserves a spot on this list. When its construction is finished, Roc will be the largest plane ever assembled in the history of mankind.

It is currently being built at the Mojave Spaceport in California by the aerospace company, Scaled Composites, for Stratolaunch Systems, a space transportation venture founded by the Microsoft gizillionaire co-founder, Paul Allen.

This gargantuan beast will boast a wingspan of 177m, which is 20m wider than the H-4 Hercules, currently the largest plane in existence. To put it in perspective Roc is so wide that when placed in the middle of an American football field, its wings would roughly hang 4.5m over each goal post.

The purpose of Roc will be to fly unmanned payloads and manned spacecrafts into the stratosphere so that they can be launched mid-air rather than taking off from the ground. This minimizes the chances of gravity interfering with the take-off, one of the aspects that have lead to many failed launches in the past.

The main rocket it is meant to transport out into the stratosphere is the Pegasus II rocket (a.k.a. “Thunderbolt”) designed by Orbital Sciences, which weighs about 249 476 kg. The first flight tests are scheduled to take place somewhere in 2016 with the official launch operations starting in 2018.

If this endeavour proves to be successful, we can count ourselves among the fortunate few who will witness a great moment in history. For the last five years AeroMobil has been attempting to build a flying car aimed at wealthy supercar buyers and flight enthusiasts, says CEO Juraj Vaculik.

Currently the Slovakian-based company is busy with attempt four, the Aeromobil 3.0 (ak.a. the “Flying Roadster”). According to their website, as a car it fits into a standard parking space, uses regular gasoline, and can be used in road traffic just like any other car. As a plane it can use any airport in the world, but can also take off and land using any grass strip or paved surface just a few hundred meters long.

The latest design was unveiled in October 2014 at the Pioneers festival in Vienna, Austria and then later again at the SXSW festival in Austin, Texas. The current model consists of a steel framework and a carbon fibre body that is powered by a Rotax 912 airplane engine.

CEO Vaculik believes that landing strips for the proposed vehicle is can easily be on the side of highways or gas stations.

One also doesn’t have to worry about traffic congestion as its price range would be somewhere in the thousands of US dollars, making it a bit hard for the average working man to come by. But not to worry, apparently they are working on an autonomous version for the masses that will be self-driving and self-flying.

But before AeroMobil’s vehicle can be entered into society they still face bog obstacles in terms of regulations and certifications.

It is probably important to note that only a few days ago on May 8th the vehicle crash-landed when it entered a tailspin. Luckily, the pilot (Aeromobil co-founder Atefan Klein) deployed the ballistic parachute and made a safe landing. The car however was less fortunate.

It seems the company only plans to release the final model somewhere in 2015 so that does give them some time to iron out the problems. 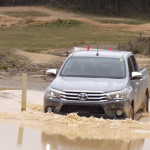