Last week Kia released a wildly unrealistic teaser image of the new Sportage. Now the Korean company has released an actual image of the upcoming SUV.

The vehicle, which will debut at the Frankfurt Motor Show, was primarily designed by Kia’s European design studio in Frankfurt, Germany, with input from the brand’s Namyang, Korea and Irvine, California design centres.

According to Kia, the Sportage’s design is meant to echo the contrast of “smooth and sharp shapes found on some of the most iconic modern fighter jets”.

The ‘face’ of the all-new Sportage represents the biggest change to the car’s design, with the headlights no longer blending into the grille but forming part of the bonnets outer edges and wheel arches.

It’s also tweaked the iconic “tiger nose” grille in a way that we’re not entirely sure we like all that much.

Kia says that the whole car has a “sportier, more raked profile”. That’s in-line with where contemporary SUVs are going, but we’d still be hesitant to say that this is something that looks like it could comfortably blast down an airport runway.

Kia didn’t release any specs or images of the new Sportage’s interior, but will most likely do so in the run-up to Frankfurt. 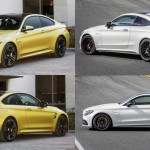