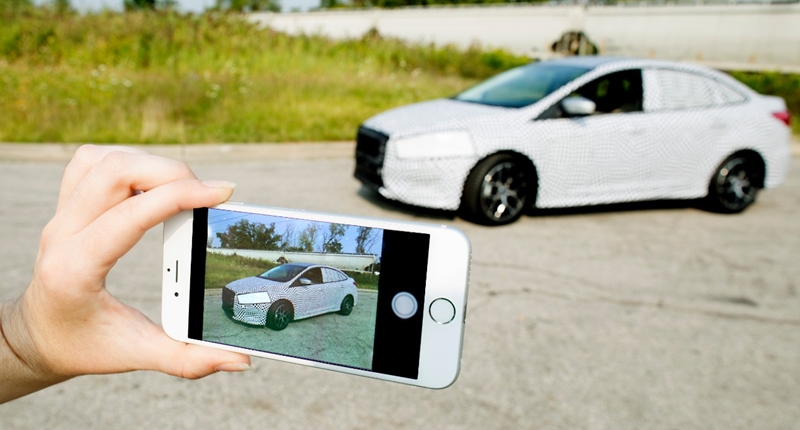 This is going to be really annoying for people who get off on taking spy shots of upcoming cars. Ford has seriously stepped up its efforts beyond the bulky black vinyl that until now has been the industry standard.

Ford now uses vinyl stickers with patterns that trick the eye and hide body lines to cover its vehicles. The modern patterns create an optical illusion that makes it difficult to see details. Such techniques result in obscure photographs, allowing Ford not only to hide its products from spy photographers, but to preserve its confidential designs and sustain its competitive edge.

“The work we’re doing is crucial to Ford staying competitive in a constantly evolving industry,” said John LaQue, Ford section supervisor, Prototype Planning and Build. “When we make it to a reveal without a photo surfacing of a non-camouflaged car, we have all done our jobs.”

Each type of camo serves a purpose through various stages of development. Unlike vinyl cladding, vinyl stickers are universal — they don’t have to be made specifically for each vehicle. Stickers are stuck on the car in no particular order, are quicker to install and more durable, plus they allow for more accurate testing as they don’t add as much weight. The stickers don’t trap heat, nor do they so dramatically affect the aerodynamics of the vehicle.

“While design is the fourth most important reason for purchase in the industry overall, it’s number two only behind fuel economy for Ford,” said Dave Fish, senior vice president, Expert Services at MaritzCX, which conducts the New Vehicle Customer Study. “It’s not surprising Ford goes to extraordinary lengths to try to keep the wraps on its designs as long as possible.”

According to Ford, its camouflage team can even change the shape of a vehicle to further mislead spies. “The use of faux body panels can drastically change the look of a car, so an observer doesn’t know what the real vehicle looks like,” the motoring giant says in a press release sent to Motorburn. “Adding length or height is a key misdirection used to keep the true dimensions of a vehicle under wraps”.

As camera technology gets more sophisticated and even more readily available, engineers are working to advance vehicle camouflage techniques to keep Ford one step ahead of both the spies and the competition.