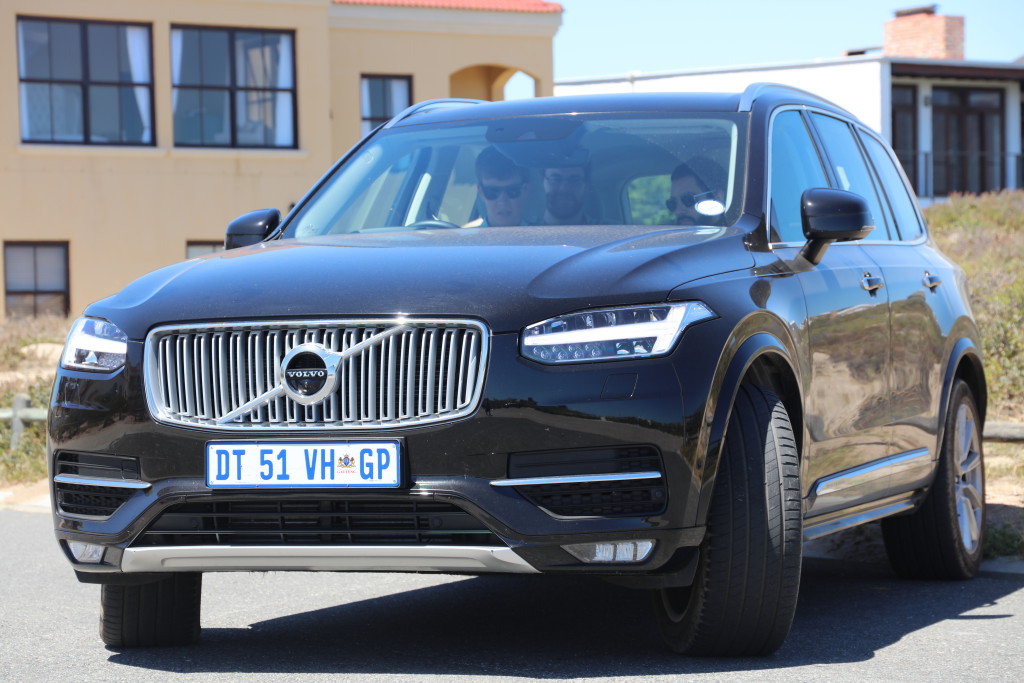 Before we start, there’s something you should know. I am not, by inclination, a fan of large SUVs. Nor, for that matter, am I all that fond of automatics. So when the very large, very automatic Volvo XC90 arrived at Burn HQ recently, it had its work cut out for it.

And while a week with this Swedish giant wasn’t enough to convert me on either of those things, I’m fairly confident that if you do like big, automatic SUVs, then you’ll love the XC90.

The safest tough car on the road

Realistically, an SUV is never going to make you weak at the knees. That’s not their job. So when it comes to assessing an SUV’s looks, exquisite lines and sleek aerodynamics don’t really matter. Instead, what you’re after with an SUV’s appearance is its ability to intimidate other road users. And on that front, the XC90 doesn’t far too badly. In black, it looks like it would be comfortable in a cabinet minister’s blue light brigade (putting aside their predilection for all things German). That said, the effect is dampened a little by Volvo’s bid to ensure consistency of design with its rear lights. While they look quite cool when viewed at a 45 degree angle, when you’re directly behind the XC90 they only accentuate how much the car thins out from the wheel arches up.

Inside, you’re met by a spacious and comfortable interior, accentuated with touches of wood and metal. The steering wheel, smaller than expected, is fairly understated. The gear lever is also muted, as you’d expect from the sensible Swedes (although it does have a trigger, allowing you to feel like you’re shooting enemies out of the sky). The model I drove had a cream interior, which looked very good, and is probably fine if you’re ferrying safety-conscious technocrats around. If however, you’ve decided to make the XC90 your school-run vehicle, it’s probably a good idea to go for something a little more sensible. Children’s snacks (even the gluten, sugar, colourant, and tartrazine, free ones) don’t tend to mix terribly well with cream leather.

There’s also a sense that parts of the interior were over-engineered (why, for instance, does the cubby hole need to open electronically?).

But the one real gripe I have in terms of the whole XC90 aesthetic package is the key fob. On the XC90, as with an increasing number of cars, it’s just a remote and while a token effort has been made at signifying luxury, you can’t help but feel that it would wear out pretty quickly and that more could have been done. All the power you’ll ever need

Once you turn the start button, the XC90 really comes into its own. While there’s no mistaking the fact that the D5 Inscription model I drove was a diesel — even the smartest engineers can’t entirely eradicate that engine idle — it’s a fact that’s easy to forget once you get going.

Put your foot down and you’ll get a jolt of instant power, more than enough to get past that pesky truck you’ve been stuck behind for the past half hour in a matter of seconds.

The XC90 feels fully capable of handling that power too. Not once did I feel like the car was anywhere near losing control. That’s pretty impressive given that the 225bhp engine in the model I drove was hauling around more than 2.5 metric tonnes. But while the XC90 has no problem moving its bulk around quickly, it doesn’t exactly do so nimbly. That makes it a little tricky to use in city centres, especially when the kind of U-turns you can pull off in a small hatchback become laboured three-point-turns in this Swedish tank.

I’m sure you get used to it — unless you live somewhere with ridiculously wide roads, in which case you don’t have to — but I simply couldn’t adjust to the scale of the XC90. Roads I would normally breeze down with confidence, became a terrifying gauntlet as the car’s proximity sensors pinged a symphony of warning tones.

It’s only really out on the open road, cruising comfortably between beautiful places, or thrashing down dirt roads that XC90 really comes into its own. Out there, size doesn’t matter and you get a sense of what it might be like driving around in a tailor-made armchair.

Trouble with the tech

Of course, to a degree, that’s exactly what you’re doing. The seats on the XC90 can, after all, remember which position you’re most comfortable having them in. And that’s probably the most basic of the technology features.

We’ve already mentioned the proximity sensors, which can be a life saver when you’re getting out of tight spot. Even more useful though are the cameras dotted around the car, which together can provide a composite overhead image that makes getting out of parking spots a breeze.

In fact, I’d argue that the composite camera view is more useful than the automatic parking feature, which I never really got to work properly. Apparently my mistake was testing it in empty parking lots where I couldn’t hit anything — a strategy which seemed perfectly reasonable until a Volvo representative informed me that the system uses the proximity of nearby vehicles to make its adjustments. The same could not, however, be said of the voice recognition and mapping tech. On multiple occasions, I would say something like “Direct me to 22 Long Street,” and get a reply something along the lines of “Searching for music from your playlist”. After a couple more attempts, I whipped out my phone and got the correct set of directions straight away.

This, let’s bear in mind, is a piece of technology that costs about 1/100th of the price of the XC90.

And even if you do get the address right, you’re forced to deal with HERE maps. Now as recently as five years ago, HERE was unparalleled in the mapping space. But that’s simply not the case any more. Google Maps has caught up and shot past it and I’m fairly certain that’s what most drivers would rather be using — even if it means an infotainment system acting as a “dumb” mirror for their smartphones.

Those gripes aside, the rest of the infotainment tech in the XC90 is pretty intuitive and easy-to-use.

A great car… for the right person Of course, the important thing to realise is that my gripes with the XC90’s size and tech foibles have a lot to do with who I am as a person. I’ve always preferred agility to size and power and that’s not going to change any time soon. Interestingly though, my fiance wasn’t a big fan of the XC90 either. While she liked feeling high up, she agreed that it was just too big.

It’s important to remember though that we don’t have kids. Because once people become parents, there’s a lot more at stake. And that in turn means that big, ultra-safe SUVs like XC90 become a lot more appealing.

So, if you’re a parent with money to burn, and you want something that’ll allow you to ferry your kids (and their friends) around in an ultra-comfortable bubble, then the XC90 is the car for you.