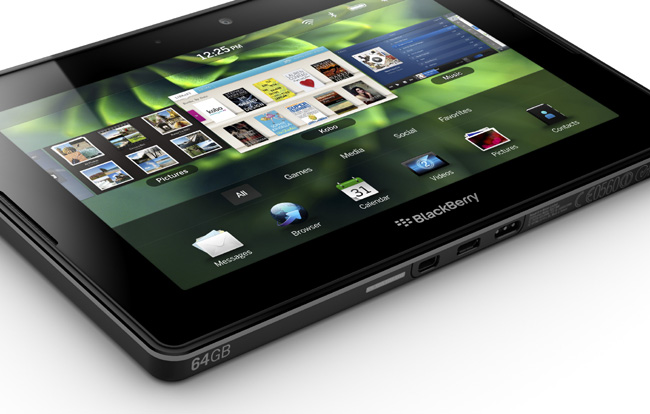 It’s a universe that you join, no less than the Apple universe. If you’re on the inside, it’s all convenience and connectivity. From the outside it’s bafflingly buggy and unequivocally restricting. of the PlayBook without a working BlackBerry phone and BlackBerry Internet Service subscription. Which I now have. So, three days late…

We’ll start with the 30,000 foot view. The PlayBook is dark and shiny and beautifully built, but it does nothing more than a comparable 7-inch Android tablet, and often a lot less. Where it does become more than the sum of parts is when you use the PlayBook as a wireless touchscreen keyboard for the BlackBerry phone. Without the BB phone, it’s just a smallish tablet that’s neither a great media device nor a great messaging device… although it still has great promise, if RIM don’t screw it up through control-freakery. But credit where credit’s due. The software platform is excellent, for which I’d give most of the love to Gordon Bell and Dan Dodge and Dan Hildebrand and Patrick Hayden and Robin Burgener from QNX, which RIM acquired in April last year.

That was a great call, because RIM’s own software ranks right up there with current day code from Microsoft and latter-day Nokia. Buggy and fat, with numerous stupid UI decisions and relentless lock-in (a mere 150MB download of the lame BlackBerry Desktop Software).

So even when BlackBerry Bridge locks up (again), you can still sweep upwards with a stern index finger to show the PlayBook’s task picker, and kill the app no mess no fuss by tapping on the little x next to its window thumbnail. With a bomb-proof operating system, apps play nicely together, even if one is having a tantrum and being confined to its own sandbox. Solid OS? Tick.

Sweep up to take control
The gesture-based control also works well once you get used to it. An upward sweep from below the screen frame brings up the GUI shell/application switcher/app-and-settings chooser. This is also the natural gesture you make to restore the video player’s nav controls or scroll up in the web browser. For the first few hours you keep minimising your app by trying to scroll. This UI design means you have to consciously keep thumbs well clear of the edge of the screen when holding it otherwise swipes go unrecognised.

The PlayBook has tilt sensors, so it can do clever interface things. It apparently also has magnetometer and accelerometer, but BB’s sketchy official specs don’t say for sure. It also has a GPS built in, reportedly, although BlackBerry is mysteriously coy about this (and neither the built-in Bing Maps nor downloaded Google Maps could pick anything up for me). Add mini-USB and micro-HDMI. An SD card slot would have been nice. Solid user and device interface? Most of a tick. The PlayBook has a multicore processor with multithreading support and a GPU – you can actually run a video out the HDMI port while simultaneously checking email. BlackBerry amusingly suggests this as a feature: while your kids watch a video, you work a bit, all from your PlayBook. Exactly how long are their HDMI cables? This full-on multitasking with split or mirrored displays is, however, a good feature for corporate presentations. Battery life seems pretty decent – several days of sporadic use on one charge. Wi-Fi does a,b, g and n. Bluetooth 2.1 + EDR. Weighs in at round 400g. 1024×600 display. 5MP snapper, 3MP front snapper. Bit heavy, but feels tough. Solid hardware? Tick.

How does it run?
To really make a dent in the tab market, BlackBerry must get over itself and open it up. Quickly. Apart from providing secure messaging for enterprises, BBM is just a YAMC (yet another messaging client). A proper email client for the PlayBook that supports POP and IMAP is vital. BB has promised a native one, but nine months on, nothing. App World terms of service currently prohibit third party email clients. A sideloaded beta called aMail looked promising, but appears to have collapsed.

The PlayBook comes bundled with Word, Sheet and Slideshow To Go (MS Office-Lite Lite), and Kobo Books e-reader with a free copy of Alice in Wonderland and The Art of War. Good choices! You also get some games: Tetris and Need For Speed: Undercover, modified for PlayBook. This is quite fun with the tablet acting as steering wheel. You don’t get given much in the way for browsing and managing files, so fire up App World and look for the free AIR Browser. Bluetooth File Transfer is a mess as usual, but I blame BT for that – no-one seems to support it natively any more. WiFi works well once you turn on file sharing in security, both for Mac and PC.

The big selling point of the PlayBook is BlackBerry Bridge, which allows you to connect to your BlackBerry smartphone, using your PlayBook as a large screen and keyboard (it’s a remote session, nothing gets copied to the PlayBook).

A Bridge to nowhere important
Functionality of Bridge is still very Version 1. You can see your contacts and messages in your BB inbox. You can browse through the phone’s connection. You can browse files on it, but only the few file and media types you’re allowed to see – if you store MP3 on the handset, you can’t see them on you PlayBook. It does not support media transfer or streaming – and it wants to either see iTunes, or Windows Media Player. Only. For some reason. Somehow. It told me this. Then stopped.

So BlackBerry Bridge – not very impressive. Basic access to your phone’s messages, BBM, contacts, web browser (effectively a tether), calendar, memo pad, tasks and some files. At first it crashed all the time, with more use it got more reliable (guess the two devices needed to get to know each other a bit before getting all digitally intimate).

Open your hearts (and app store)
BlackBerry has a very strong piece of technology that could take it far, as long as it has a bit of vision. Open things up a bit, incentivise app developers. Things have come on in leaps and bounds since the App World first launched (or as The Guardian calls it, Soviet-style Appski Worldski), but the store’s shelves are still pretty bare.

And for the love of God, BlackBerry, stop hakking on about BBM and your ruddy email service. Some corporates like the integration with Notes and Exchange and NetWare, but World+Dog generally doesn’t care when shopping for consumer products. Open your hearts to other ways of doing things. This thread on a BB support group says it all:

CrackBerry David: “Why would you want to use other software than what is provided with the default BlackBerry?”

Answer: Oh, you know, POP3 and IMAP folders, proper synching (i.e. delete messages as instructed), supporting a variety of attachments (remember MIME?). And so on.

Did BlackBerry duff it by going for a 7-inch instead of 10-inch screen? According to BB, they chose this size as BB users are conditioned into typing two-thumbed on their phones. Really not sure if this translates into the tablet world. The smaller size drops the PlayBook into a bit of a hole between a large smartphone at 4-5”, and a full size tablet at 10”. For browsing and watching media, 7” is too small. For messaging and SM, it’s fine. But a big touchscreen phone is just as fine.

But we know from the research that browsing and watching media is what most tablet buyers want.