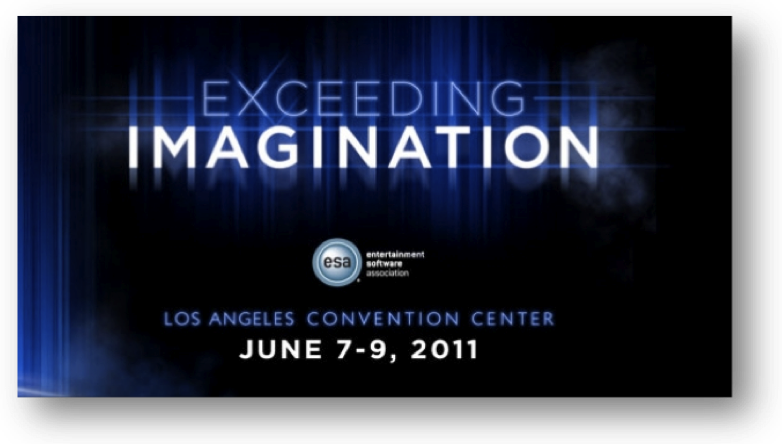 It’s almost time again for E3 2011 and like Christmas, millions of boys and girls (mostly boys) across the globe are preparing to have their expectations calmly blown out of the water as their beloved consoles prepare themselves for an onslaught of new titles. Microsoft, Sony, EA and Nintendo will be the dominating forces at the E3 event and each one will do battle for the hearts and minds of the videogame junkie.

From the 7th to the 9th of June at the Los Angles Conference centre, every avid gamer’s thoughts will be focused on the events that occur inside the hallowed halls. This is what our friends over at IGN think will go down.

Personally, the announcements made at this centre shape my budget for the coming months, as certain consoles suddenly become more appealing once their new library of triple-A titles has been publicised. Everyone else’s news at E3 becomes a laundry list of sequels and shovelware which will have little to no impact on our gaming lives. It is difficult to quantify every new title at E3 2011, so for the sake of brevity, I have highlighted the most important events which we expect to occur at this year’s spectacular: The current prince of Microsoft’s consoles has had an excellent year and the company must build on its success by possibly slashing the price of the Xbox 360 consoles by US$50. The console manufacturer will continue to release Kinect bundles as this add-on has proved to be wildly popular. The downside is that the current crop of Kinect games are awful, thoughtless titles which owe more to the success of the Wii than anything else. Microsoft has addressed this and mentioned that it is intending to reel the core gamers in to the casual market with Kinect games that truly utilise the untapped power of this motion-detection system. Other plans include the release of sequels to million-selling titles which include Gears of War 3 and Forza 4. Both have been whispered to be the swansong of the series, with Gears of War 3 guaranteed to incite another three to four years of constant online play. Microsoft is playing it cool this year; let’s see how it works out for them. The dark horse of E3 has much to prove. Sony has failed its online audience by collapsing like a deck of cards when concentrated attacks forced them to shut down the PS Network. Millions have been lost in revenue and fans have defected to the beige side in order to continue their online gaming marathons. There will be no mention of this catastrophe, only the sweet smell of success as Sony trickles a stream of honey into the mouths of its hungry audience. Delicacies include the NGP, a console with the rumoured capabilities of the PS3 itself, and the hoped-for launch of Star Wars: Clone Wars Adventures on both the PC and the PS3m along with the new Uncharted 3: Drakes Fortune. We predict less chatter surrounding the Move as it has been something of a failure, selling fewer units than the Wii Remote and the Kinect. The little white shoebox that everyone seems to own has reached the end of its lifecycle. Nintendo has confessed to this by announcing the release of a successor to the Wii. Nicknamed ‘Project Cafe’, the new console will have to include improved controls, HD-gaming and a solid online environment if it has a hope in hell of attracting the core gamers of the world. Also, a new Mario, Zelda and Metroid title at the launch won’t hurt its chances. Sales have reached a plateau and a decline was inevitable. There are only two major titles being announced by Nintendo, namely Mario 3DS and Zelda: The Skyward Sword. The great white whale from the east will have to pull an ace from its sleeve if it wishes to succeed at this year’s E3 – our predictions are on a soft launch of the new console.

The rest of the hype
Sweet, sweet gaming – how our nights would have been so much colder without you; sequels to top games are the standard at all E3’s, with this year being no exception. Duke Nukem, Batman: Arkham City, Bioshock Infinite, Modern Warfare 3, Deus Ex: Human Revolutions, Hitman 4, Mass Effect 3, The Elder Scrolls V: Skyrim and Tom Clancy’s Ghost Recon: Future Soldier are the most-hyped titles of this year’s show and a sign that shooters are the current crown jewels of the console market. There will be few surprises this year, only the fierce marketing of grade-A new games, and some comfort for the faithful who get to play reboots of their most popular games. As the lights dim and the curtain draws open on each press conference, gamers the world over will watch their Twitter feeds for the juicy details surrounding their favourite title. Memeburn will be covering all events relating to E3, so stick with us for the latest news as it happens.