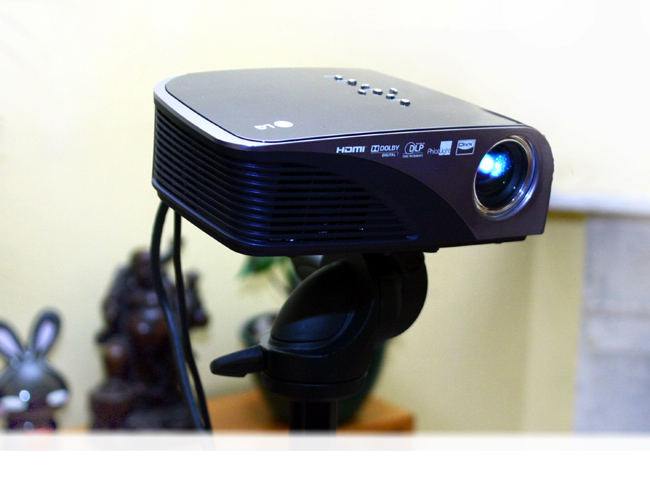 Review: The good news is that this little LG HS200G micro-projector will last you 20 years if you use it for four hours per day. The bad news is – well, there’s no real bad news, it’s great. Just some reality checking to avoid disappointment. The little LG HS200G is a handy little guy – you can slip it in your pocket if you have really big pockets; it only weighs 800g. Pretend not to notice the medium-size power brick on the floor out of sight, it ruins the tinyness story.

LED lamps are the next leap forward – although right now they are pitifully bright compared to a standard arc lamp. A good arc lamp will give you two to four thousand lumens, currently an LED projector can struggle up to 200 or 300.

But LED does not burn hot, and doesn’t draw huge amounts of current – so you can get a micro-projector like the HS200G that’s only 183x122x60mm. LED is also robust, giving you a lamp that should outlast your device. Or at least outlast your desire to own the device.

200 lumens is good enough for a PowerPoint presentation in a relatively darkened boardroom. Open-plan pseudo-Scandanavian gorgeous glasshouse architecture open to the skies? You’re out of luck.

On the resolution side, 800×600 pixels is good enough to use for TV and movies at home (although not if you’re into daytime soap operas and your curtains are a bit thin), but not if your’re a Blu-ray buff.

Boardroom PowerPoint antics
And that’s what the LG HS200G is good for. A bit of corporate presenting is its main job, especially if you carry your projector around a lot, or have one stashed in the boot just in case, as the unit is very light and compact. This means you can mount it on a simple collapsible camera tripod (standard camera thread).

It also has some presentation-friendly features, like an FM radio transmitter for sound. Hook up the projector, tune your boom box radio into the sound stream, and off you go for awesome multimedia mojo. It’s like DLNA for audio streaming, except it mostly works.

Impromptu movie night
For home use, it’s a good one to have around when you have a few friends over for a movie night. It’ll go up to a maximum of about 2m wide, after which focus becomes a problem. But that certainly beats trying to get 15 people to sit in front of your 42”, doesn’t it?

If you’re a serious home theatre buff, this is not for you. 800*600 not only makes fairly visible pixels at larger screen sizes, but it is 4:3 aspect ratio, so 16:9 requires letterboxing or stretching. And then there’s that pesky brightness issue. The HS200G has an HDMI, composite, VGA and RGB component (note, not YPbPr) input, the latter though an adapter LG thoughtfully throws in. It can also take a USB drive and let you browse files and show pictures (jpeg only) and movies (AVI, m4v, DivX with MPEG4, DivX, Xvid codecs, up to 720×480/800×432).

It also has a little remote that lets you access menus, and adjust volume and keystone, as well as nav and player controls if you are feeding it via USB.

What it doesn’t have is any kind of zoom function, assuming your dragging it back and forth until the right picture size is reached is not considered ‘real zoom’. This is a big drawback, as if you’re in a cramped room, you get a picture only as big as what the wall directly behind you will allow.