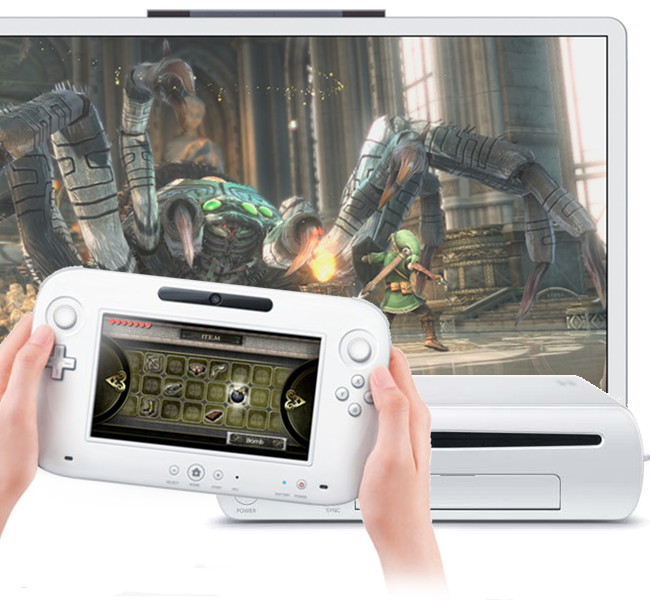 So now we know what Nintendo had up its sleeves: the Wii U controller-tablet hybrid.

There was talk that the new Nintendo console would be called simply “Nintendo”. I favoured of that name, since it brought back memories of the days when that word itself was a synonym for video games. Instead, the new Nintendo console is called Wii U, most likely to capitalize on the positive brand image of the original Wii. I was never a fan of the name Wii, and this isn’t lighting my fire either. Name aside, however, I’ll admit that I am intrigued by Nintendo’s latest innovation.

In the run-up to the E3 conference I gave my wish-list of what I think Nintendo absolutely has to do with this new console. I thought I would run through it to see if they followed my advice. You can check out the video first if you haven’t seen it in action yet. The fun starts at 1:45.

That video should answer that question. It looks fabulous. I’ll leave it at that.

There’ve probably been a few more since the actual conference yesterday, but the point is: there’s an awful lot of third-party stuff on that list.

3 – Give gamers one unified controller (double tick!)
With this one they listened.

If you checked the video above, then you know that like the Wii before it, Wii U’s major selling point is the controller. It’s so completely different from what anyone else is doing. And it’s innovative as all hell. Now it does look like an iPad and an Xbox controller [insert coital euphemism of choice here] each other and had a messed up mongrel baby, but the Wii Upad (as we’re dubbing it) doesn’t look that difficult to use. And if the video is anything to go by, Nintendo has already thought up a bunch of interesting uses for it. I am not sure how comfortable it will feel to hold, but it has my attention and I seriously want to get my hands on it.

And they kind of didn’t listen, too. The Wii U is still compatible with all the Wii’s old peripherals. This is mostly a good thing though, as it means you’ll still get some use out of that massive collection of white plastic you have lying around.

4 – A proper online service
The machine does have video conferencing via the Wii Upad, which at the least means the console will be online in some capacity. But I am really hoping they get this aspect right, because it they do, there’s a good chance they can lock up the market. Nintendo basically has the casual market to itself, and if they implement an Xbox Live-style online system and convince Activision to come onboard with COD… they will be able to offer a single console for two huge demographics.

While demoing the Wii U version of “Ghost Recon Online” for MTV Multiplayer, Ubisoft producer Adrian Blunt revealed that Nintendo will be doing away with friend codes. “Rather than a machine having an account, each individual user has an account,” Blunt explained, elaborating that the system would be similar to Xbox Live Gamertags. No confirmation was offered as to whether the Wii U would feature an equivalent to Achievements/Trophies.

5 – Price it right
No price announced yet. But if it’s competitive with current Xbox and PS3 pricing they should be just fine. If people know they can get the next big thing at the same price as those “last-gen” consoles, they’ll buy it.

6 – 3DS Integration
The Wii Upad trumps whatever features I wanted enabled through the integration, so it’s essentially a non-issue. It wouldn’t hurt to give this feature some TLC, but I can’t really see a point to that now.

For the most part, I am optimistic about the Wii U’s future. But I do have a concern that it may end up working out exactly as with the Wii.

My worry is that the third parties are going to make a serious effort to make awesome games specifically for the Wii U and its new controller’s functionality… and then you, you know, stop.

The processing power of the Wii U and the button layout of the Wii Upad means the machine will be able to accommodate straight ports. That represents a cost saving for developers, but the need to take advantage of that extra screen in a unique way may become a cost issue.

Game development is not cheap and if ignoring that screen means spending less money, then its not difficult to think what the devs will do. In the long run, we’ll have a situation where only Nintendo will be developing for this console again. And all that innovation may well go to waste. It’s not necessarily a bad thing: Nintendo has attained massive financial success with the Wii under that model. But it would be a shame if none of the third-parties take advantage of the Wii U’s potential.