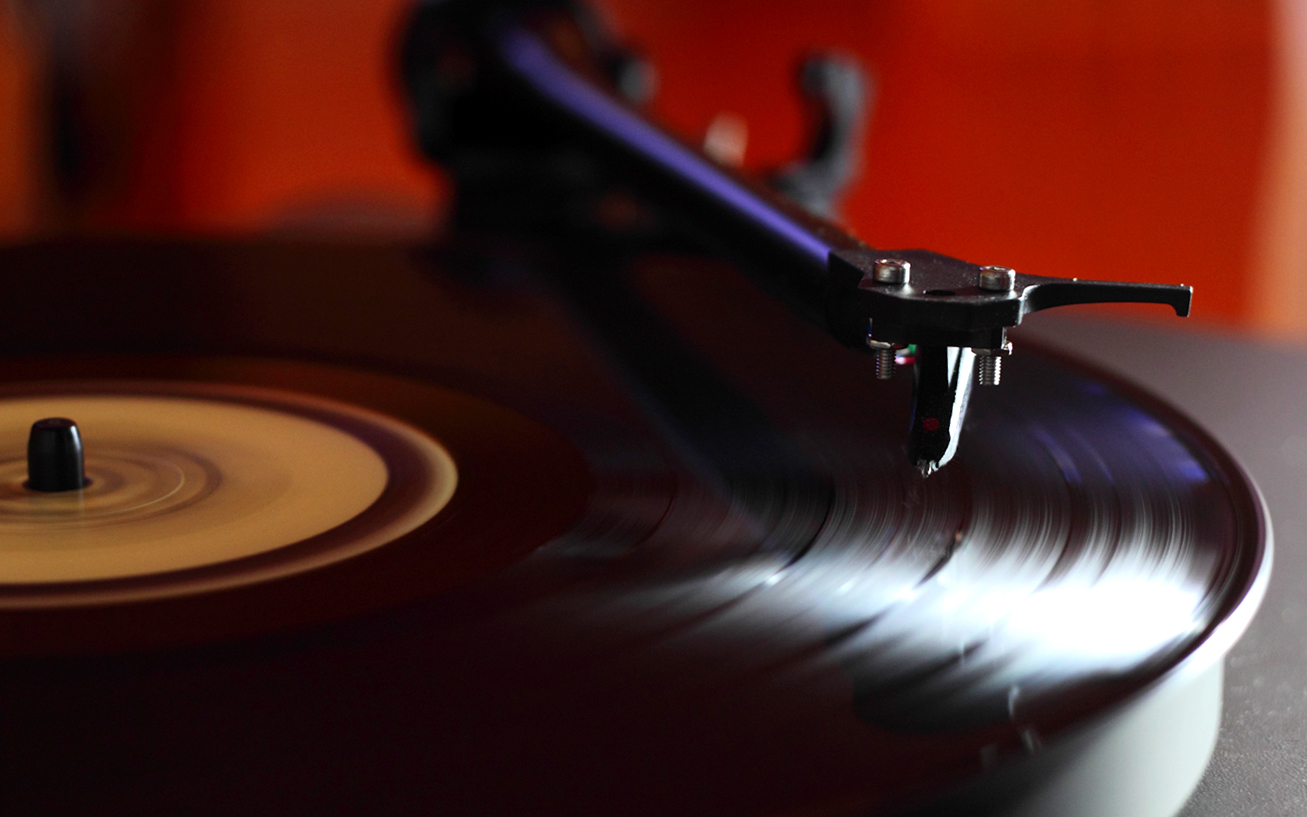 Not a Review: Listening to music on vinyl – Gearburn is all about the latest and greatest – but to be sure we’re not missing the gorgeous old forest for the shiny new trees, we also look backwards to see if we’re moving forward. LP vinyl records were what your parents listened to, not because they had greater presence and deeper, fuller soundstage with darker blacks between the notes, but because that’s pretty much all they had. Now we have mp3 players and stream music from our phones to our bathroom sinks wirelessly, and the only people that still listen to vinyl are a shrinking minority of DJs and crusty audiophiles. How much more? Well, that’s hard to say. In fact, almost impossible. Two main reasons: someone that has spent a lot of money and time building a great audio system has a strong incentive to give their choice of technology the thumbs up, and trying to get a completely rational, objective view is more likely to end up in a pissy handbag fight than a useful answer. The other is that a more expensive, finer quality system will always beat a less expensive system, and too often a top-end vinyl setup is compared against a moderate quality digital system.

As strong as the weakest link

So a good place to start is to look at the start of the music signal chain, and what can go wrong.

A vinyl recording is a pressing of a finely etched spiral groove, with the waveform represented by bumps and rises and falls in the groove – exactly the shape of the amplitude waveform of the music, and what the speakers will need to reproduce to make the noise. This is read by a tiny diamond (or sapphire) tipped stylus in a cartridge, which moves a tiny magnet up and down inside a coil (Moving Magnet (MM) type, there is also Moving Coil (MC) type). This generates at each instant a tiny voltage exactly equivalent to the size of the bumps in the groove – which is an exact representation of the music waveform, even at very high frequencies. A good record pressing can easily have a response from 20Hz to 25kHz – some even have audio information over 100kHz, although human hearing maxes out at 20kHz, and if you’re over 40 and spent too much time at raves or rock concerts, it’ll be down around 15-17kHz. The voltage produced by the cartridge is really tiny, though, around five millivolts, so it needs to be amplified by a phono stage before you can do much with it.

Almost all hi-fi amplifiers used to have a built-in phono stage, now few do, especially modern AV receivers. You can easily buy external phono stages, which then plug into a standard line-level input (they can cost a few score bucks to hundreds or thousands if you’re getting silly).

This phono level signal is amplified, then amplified again over a few gain stages and pushed into the speakers. And voila, music.

A digital system is less elegant. You have an analogue signal, which is digitised. This means it must be first be filtered to remove everything but the 20-20kHz audio band, then sampled and quantised (Hello, aliasing! Hello, quantising noise!). It can then be stored as a bit stream as PCM (pulse code modulation) on a CD, or in a WAV file, which are pure digital copies. These are pretty good – sampled at 44.1kHz to give a Nyquist frequency of 22.05kHz, well above human hearing.

Because these files take up lots of storage space, and hard drives used to be expensive, the music is often encoded into a lossy format like mp3, WMA or AAC (Hello, compression artefacts!) A badly compressed piece of music sounds washy and sibilant, with loss of detail on higher frequencies, cymbals or high-hats go “tish” not “swiktsasishhhh”, and voices sound flat and muddy, especially female vocals.

Now your music is stored on an external hard drive, so to play it back, you first must read the music file and hope your USB port is fast enough (Hello, buffer overflows!). The decoding is done according to a psycho-acoustic model, so it’s a close but not exact representation of the original signal (Hello, decompression artefacts!). It’s then converted to a bit-stream and fed to the Digital-Analogue Converter (Hello, jitter and drop-out!), either in your media centre, or if you have your head screwed on right and some wonga, a decent external DAC.

The DAC then takes the quantised samples, and reconstructs from the square-wave digital approximation a continuous analogue electrical signal at line level (about half a volt peak). Hello once more, distortion and noise (we’re talking monotonicity, settling time, etc etc etc). This is then fed into the line input of your amplifier.

That’s a lot more complicated than vinyl. So many more places in the signal chain for things to get messed up. With vinyl it’s a simple, two-stage process – stylus moves to create voltage waveform, amplified to line level. Digital requires numerous steps, all involving complex electronics.

But digital music has one feature that vinyl doesn’t – it’s immune to dust, cat hair, sneezes and spilled drinks. Playing vinyl albums again after all these decades, I’d forgotten the snap, crackle and pop of surface noise. The sound quality of the music is phenomenal, though, and somehow the snaps and crackles even sound a bit musical, but there it is. Pop. Crackle. Pop. The first is the discs are large, heavy and cumbersome, and you have to be REALLY careful handling them. Dirt. Scratches. Bye bye. The second is that at least once every half hour you have to jump up and turn over the record. Pop. Snap.

In one way it makes you focus on the music more – you can’t just put on a three hour playlist and leave it burbling in the background. Also, because the discs are delicate, you appreciate the music more as something to cherish, something that’s a special occasion when you bring it out.

Do you care enough to care?

This last factor is the least significant, and also the single biggest reason why the music industry is in the mess it’s in. Music is no longer special, a work by talented and driven artists to create something that talks to our emotions. To the latter day Sonys and Warners and Universals it’s a tradable commodity to be relentlessly marketed, but never loved. And the consumer electronics companies pack nastier and nastier electronics into more and more feature-packed sound systems that we can barely hear the music any more. And so we feel nothing for pirating music, because it’s as meaningful to us as a pair of sneakers or packet of gum.

A decent vinyl setup makes music ‘pop’ – but often only with older recordings, or a very small (and shrinking) range of newer material. It works particularly well with natural, acoustic instruments and really talented vocalists. Contemporary productions (especially the mass market tat) use mostly synthesized instruments, and very often they’re just mashups of loops, used over and over again on track after track with some new vocals from the newest syntha-popstar that are auto-tuned, compressed, expanded, spun, dried and folded and dobbed on top.

Vinyl. Record players. Turntables. Cartridges. Record brushes. Album art. Liner notes. It’s all great. But do we Gear it or Burn it?

If you discount the matter of crap source material being pumped out of record companies, and only focus on the good stuff (old and new) so that we’re talking about music that you want to listen to in the best way possible, you come down to the nub of the matter – practicality.

Technology has moved on, and the digital technology we have now is phenomenally good. If you take a bit of care in your setup, build a collection of high quality rips, and (most importantly) invest in a good DAC, your digital music can sound at least as good as vinyl – but without the snaps, crackles and pops, and the hassle of the fragile physical media and jumping up every half hour to turn it over.

With digital you can store thousands of songs wherever you want them. You can hear about a great new band, and have the album in your collection instantly. You can have multiple backup copies so that you never lose it again.

Vinyl is now the domain of the most hardcore audiophile, because to make it sound superb enough to beat even a decent digital setup you need a superb system – and that does not come cheap.

Vinyl is now for the niche of hardcore music fans, big time audiophiles, or retro hipsters. The hassle factor is just too great for the majority of music lovers.

So, if it’s not going to be vinyl, it can be almost just as good (and a hell of a lot more convenient) if you spend some time sorting out your media player (on PC look at ASIO, kernel streaming or WASAPI, on a Mac you get Core Audio built in, which just works) and your conversion electronics – onboard DACs built inside most consumer electronics are awful, as are the line driver stages that provide the line-level output. With that sorted, you can get 99.5% of the way to musical bliss.

We assume you already have a decent amp and speakers. Surely. Otherwise you wouldn’t have read this far.