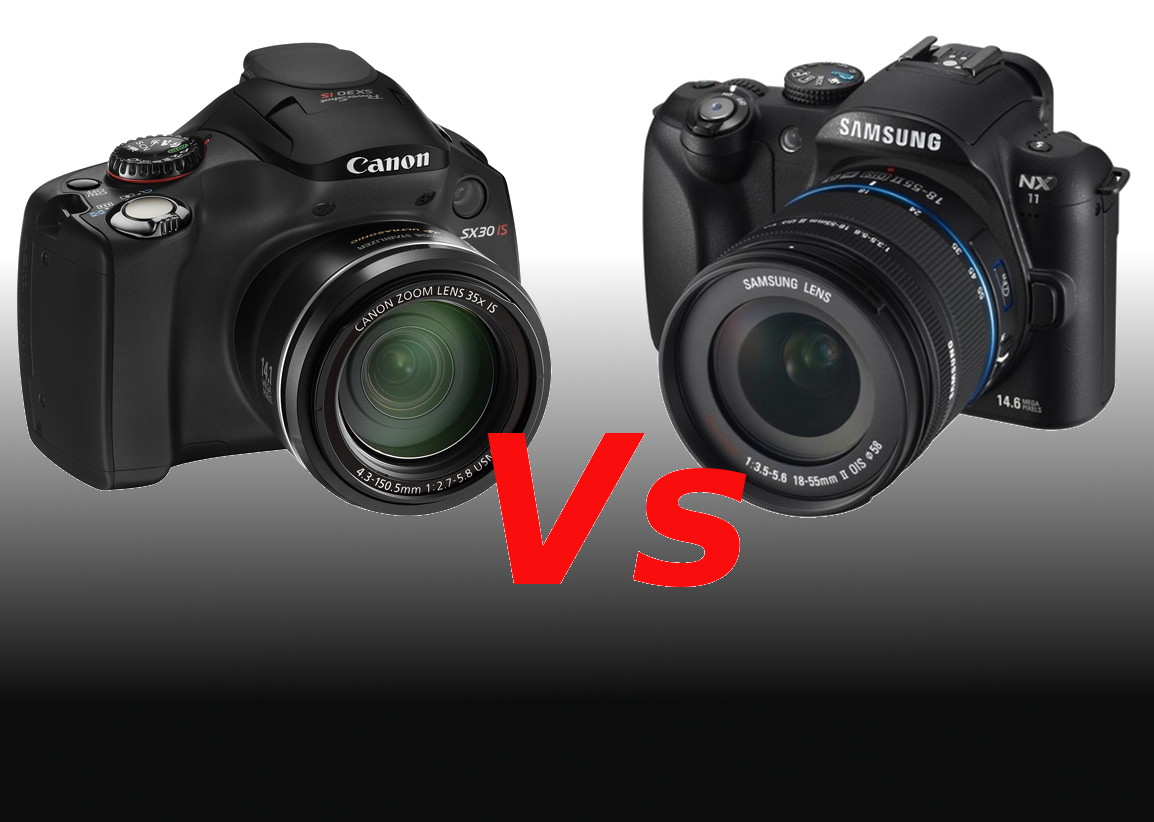 Back-to-back Review: The Samsung NX11 and Canon SX30 bridge cameras are aimed at the same photographer, but take different approaches. Both are very light and very compact, ideal for doing the tourist or family holiday thing. One goes with an interchangeable lens system, one with a beast of a lens that does everything. Ish. Cameras in the bridge camera segment have, for a long time, been squeezed between their little brothers, the steadily more powerful and capable point-and-shoots, and big brother SLRs, particularly the low end consumer DSLRs – and to an extent, bridge cameras have had the disadvantages of both (bulky AND not very flexible!). Now, with the electronic viewfinders (EVF) getting brighter, higher resolution and faster responding, bridge cameras are starting to become a good option for those wanting something relatively potent, but unwilling to schlep a DSLR around. And so, we come to the Samsung NX11 and the Canon SX30 IS bridge cameras.

The two companies have approached this from different departure points – one tends towards SLRs with their flexibility of interchangable lenses (Samsung), the other towards compacts with their one-size-fits-all convenience (Canon).

Samsung
First the Samsung NX11. The price of an entry level DSLR kit at US$550. Tick of the must-haves in the segment – GPS, HD movie, face recognition, blah blah blah, all correct and accounted for, so we can get right to the important stuff—how good is it at taking pictures? It’s got a huge sensor for the segment, an APS-C sensor commonly found on entry- and mid-range DSLRs. Not only do you get a healthy 14.4MP, but the larger sensor improves lower light shooting and a lets you choose a shallow depth of field if you want to blur the background.

It uses the proprietary NX lens system, which gives you a limited but useful set of options – a 20mm and 30mm fixed pancake lens, a 50-200mm telephoto, 18-55mm pancake, and the 18-55mm standard tele that usually ships with the kit combo (multiply by 1.6 to get 35mm equivalent focal lengths).

This system has a couple of nice aspects – Samsung generally has a strong engineering sense when it comes to clever and useful features that don’t stray too far into pointless frippery. The NX lenses have a system called i-Function where a button on the lens itself lets you cycle through several adjustment options that you can set with the ‘focus ring’ on the end of the lens. Depending on mode and selection you can adjust shutter speed, aperture, ISO, exposure compensation with the ring. You can, of course, also use use it to focus in manual mode, with the display helpfully showing you a zoom of what you’re fixing on to get fine focus adjustment. The command dial by the shutter lets you adjust other settings. It has a crowded bunch of controls, although they’re relatively intuitive and fall easily to the fingertips even if you have big hands. This allows the keen amateur to get pretty much total control over the image – but if you want you can hit the idiot button and the camera will generally make the right decisions for you.

The body is pretty compact at 132x87x40 and 353g, the standard package lens adds another 200g. With the standard zoom it’s not going to slip in your pocket, with the compact zoom it could. It is a bit plasticky, but not flimsy, and feels built to last at least a rough backpacking adventure. And that’s where it’ll do its best work – it’s perfect for the photo enthusiast on holiday who wants to get the great shots, but doesn’t want the heavy bag of gear. With the compact zoom (only 4cm deep) you can do your sight-seeing unencumbered, and have the 50-200 tele for the game drive or hot air balloon trip.

Since there is no such thing as a free lunch or a no-compromise engineering problem, interchangeable lenses let you choose the better lens for the job, rather than take-it-or-leave it do-everything ultra-zooms with their extremely imperfect optics. You don’t get a flip-out articulated display, but the 3” AMOLED viewer is bright, crisp and pleasingly colour-faithful (the Canon we get to next punches up the saturation something silly). The electronic viewfinder is adequate – fairly responsive and clear enough to be useful, although those with DSLRs will still look askance.

Samsung is clearly taking its serious amateur cameras seriously, with features like a depth of field preview button below the lens, a dedicated exposure lock button and building it with the most common 58mm diameter thread if you want to add filters (at least get a skylight filter to protect the front lens element!). Also, the lens mount is metal, unlike bottom-end SLRs which are often plastic nowadays.

Canon SX30 IS
This camera is a great piece of optical engineering at a very reasonable US$400. In one single fairly compact body, you’ll get all the camera you’ll ever need. Assuming you’re not obsessive about performance statistics. It has a monster zoom range – the 35mm equivalent of a 24-840mm. That’s huge. It would have been impossible ten years ago. An 800mm lens is something you’d normally see on the sidelines of Wimbledon centre court, the size of telescope and weighing many big kilograms – and then there’d be the enormous monopod just to be able to hold it straight.

So what’s happening? First, the SX30 uses the tiny 1/2.3″ sensor, so building superzooms suddenly becomes easier – if this camera had a full size 35mm sensor its lens would be a 4-150mm equivalent. Second, you make some compromises on image quality and speed by packing in the elements.

That being said, Canon still manages to get some remarkable results out of this camera. As the sensor technology improves, these tiny little sensors (which make the optical design so much easier) are becoming less and less prone to horrible noise and digital artifact. It’s a bit of a heads you win, tails you win.

But just because you can doesn’t mean you should, and Canon and its brethren are getting into yet another of those insane specifications arms-races. An 800mm lens without a tripod is not humongously useful. Even with a tripod, because of flimsy plastic bits, it’s not fantastic. And that’s only in really bright sunlight, and with the full might of the image stabiliser in action. In even slightly marginal conditions good luck getting it to focus or take a picture without camera shake at full extension. The Canon SX30 IS is easy to use, with tried and tested Canon handling. Most functions close to hand (or fingertip). That being said, with every generation Canon’s cameras become less intuitive, with fussier controls and more cryptic icons.

It’s certainly more comfortable to hold than the Samsung – the bodies are very similar size, but the Canon has a deeper bulge where you grip it, and larger controls on the top. Another big bonus is the articulated flip-out display, although at 2.7″ it’s smaller than you’d expect on such a bulky body. The electronic viewfinder is really not very useful – pretty fast, but not high resolution and takes up only about a third of the viewfinder area.

The feature set is just ridiculously long, with innumerable snazzy and jazzy thingums, like the “zoom framing assist” with its own dedicated button: a complete waste of time. How about a second user-mapable button instead? That would be sweet. Wink-activated timer? Stop the feature creep, Canon. More quality, less silly auto-this and insta-that features. Canon has heavily pushed the SLR-like styling cues, with a faux prism bulge on top and even a fake bump where the lens release button would be. All of which makes for a serious looking camera – pull out this baby and no-one will be under any illusions that you’re but a serious photo dude. Except the guy behind you with patronising sneer and the EOS-1N and 50mm prime.

When it comes to taking pictures, it does a damn good job, seeing as it is trying to do every possible job a camera can do. It makes a great daddy-cam: you can take action pics of your little nippers being cute in the play park, and still get some really nice close-up shots of the lions at the kill in the safari park. It does feel even more plasticky than the Samsung, although still tough enough. Good results across a range of lighting situations, although automatic white balance starts to lose it as it gets darker. Does have a tendency to over-expose. Check the amazing close-ups you can get — although in low light it gets pretty grainy with colour artefacts.