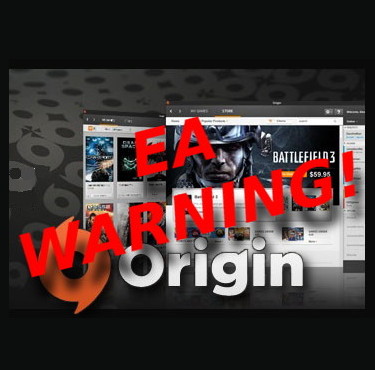 Imagine for a moment that you’ve decided to spend your money on… something, anything really. A car, a cellphone, an iPad, a haircut, pay TV service, whatever. Now imagine for a second that an intrinsic part of that transaction gives whoever you are trading with the right to enter your home and rummage through your personal belongings and those of your kids. And they can do this with impunity.

Furthermore, not only would they be able to do that, they would be able to extend that right, perhaps at a price, to anyone of their choosing. Would you still participate in that transaction?

I’m not afraid to predict that, given those terms, no one would knowingly agree to participate in a transaction of that nature. Unknowingly is a different matter altogether. Which is exactly what good old videogame publisher Electronic Arts (EA) is counting on.

If you’re a gamer, specifically if you’re a PC gamer, then you are likely familiar with the End User License Agreement, the EULA. It’s that long wall of text that appears during the installation of most pieces of software that you have to agree to before you can complete the installation. Most people just click the “agree” button and carry on with their business, not paying any thought to what it is they are actually agreeing to. Fortunately there are some people, like the numerous people on Reddit’s r/gaming community, who had the presence of mind to actually read those things and alerted me to this little gem, found on page two of the EULA for EA’s Origin application.

You agree that EA may collect, use, store and transmit technical and related information that identifies your computer (including the Internet Protocol Address), operating system, Application usage (including but not limited to successful installation and/or removal), software, software usage and peripheral hardware, that may be gathered periodically to facilitate the provision of software updates, dynamically served content, product support and other services to you, including online services. EA may also use this information combined with personal information for marketing purposes and to improve our products and services. We may also share that data with our third party service providers in a form that does not personally identify you. IF YOU DO NOT WANT EA TO COLLECT, USE, STORE, TRANSMIT OR DISPLAY THE DATA DESCRIBED IN THIS SECTION, PLEASE DO NOT INSTALL OR USE THE APPLICATION.

Here’s a link to the whole EULA if you’re interested.

EA Origin, for which this EULA is written, is an application that manages the videogame giant’s digital distribution. Essentially it’s EA’s version of Valve’s Steam. This clause within the EULA basically gives EA the right to search through and record the information on your PC and then to use that information to do pretty much whatever they chose, which includes giving or possibly selling that information to a third party. Now, of course for that to actually happen, you have to actually agree to the EULA and I am certain that now that you’re aware of this, you’re unlikely to want to make use of the Origin service, right?

Because after all, Origin is an optional service and it’s not necessary to have it, if you purchase your EA games via more traditional means, like at a Walmart. Unless, of course, you were planning on playing Battlefield 3, which requires the Origin client to be playable.

I don’t know about you, but I am salivating at the opportunity to play Battlefield 3, a game that by all accounts may take the crown of best military shooter. But to get that opportunity, I am being asked to give over all the information stored on my PC. I don’t know about you, but that seems like a fairly high and wholly unnecessary price to pay for what amounts to a piece of entertainment. Now this particular clause is the most invasive I’ve ever come across in an EULA, and really does confirm my distaste for these “agreements” in general.

When did we get to this point that in order to purchase a videogame, a piece of entertainment akin to a book or DVD, we have to subject ourselves to ludicrous and draconian conditions. Now I can understand the need for some sort of contract when a big ticket item is involved, a house for instance, but why do I have to throw away my rights in an exchange worth US$20 or US$30?

This issue goes beyond EA trying to sift through your information, beyond videogames: it extends to nearly any piece of software available to purchase… sorry, for licensing. It is something that has passed most people by, but all those programmes on you PC, you know the ones you went to brick and mortar store and paid for in cast, well you don’t actually own them. You think you do, but you don’t. You have been licensed to use it and the issuing of that license come with conditions, man of which are not in the best interest of you the consumer.

Conditions such as:
• censoring consumer reviews – In 2002 Network Associates had clause in the EULA of one of their McAfee products to prevent people from reviewing there products in public.
• promoting anti-competitiveness – some of you may remember Blizzard’s lawsuit against the guys that created bnetd, a software package that allowed gamers to play Blizzard’s games on their own servers, bypassing the need for the Battle.net servers.
• legitimising spyware – this EA origin debacle is a good example of this one.

How is that over the last few decades, that corporations have been able to impose rules on how consumers are able to interact with the products that they have obtained legally? How is it that they can get away with these kinds of actions without reprisal? Because there aren’t any laws preventing them, that’s how. And they software vendors wouldn’t only like to keep it that way, they are making moves to legislate actions to keep it that way. And strengthen it.

In 2000 in the United States a list of software vendors (including Microsoft and AOL) backed the introduction of the Uniform Computer Information Transactions Act,(UCITA) a piece of legislation that would effectively allow them to get away with anything, provided they stated it in the EULA. The legislation was buried by 32 state attorneys general, the Federal Trade Commission, and a number of consumer advocacy group, but its existence does give some insight into the thinking of these companies.

So what’s to be done? How do we deal with these schoolyard bullies that won’t let us play with the toys unless they get to wedgie us first. The most obvious answer is to not play with the toys no matter how cool they are. Only problem is, we’re at a point where most of the kids in the yard are already so used to getting their underwear pulled up their cracks they haven’t even figured out it’s wrong.

I think Reddit user, fdtm, offers up a workable solution. A silent boycott is not the answer. If only 10 percent of the potential audience participates in a boycott, in the long run, all it will prove to EA and their ilk is the remaining 90 percent are still suckers. But we need extend this fight beyond just EA. As consumers we need to draw attention to the extortionist practices the software vendors are engaging in. And to do that we need complain about it, often and loudly. We need to interact with the media about it and yes, we need to practice some self-restraint and also boycott their products. As ftdm puts it, creating “… awareness [about] of this issue would be 100x more effective than a silent 1 percent ‘voting with their wallets’.”