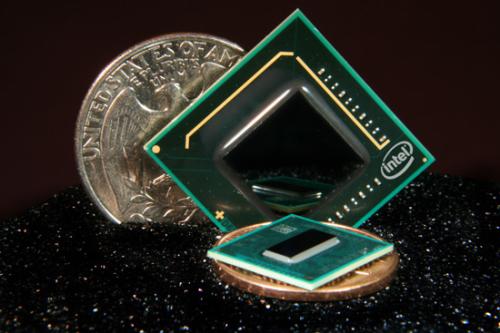 Intel, left behind badly in the market for processors for mobile phones by comptitors like ARM, looking for a fast catch-up by teaming with Google to tailor chips to get top performance out of Android-powered smartphones.

“Our collaboration with Google will bring a powerful new capability to market that helps accelerate industry innovation, adoption and choice,” Intel chief executive Paul Otellini said at the opening of the US chip maker’s developers conference in San Francisco. The alliance with the world’s largest computer chip maker came as Google ramped up its push into the hot smartphone market with a deal to buy Motorola Mobility for US$12.5 billion.

Motorola Mobility makes mobile phones, tablet computers and TV set-top boxes — areas where the Silicon Valley-based Google has no experience other than writing the software to power the devices.

Smartphones powered by Google’s free Android mobile software have been soaring in popularity and have become targets of patent lawsuits by iPhone maker Apple.

The joint effort by Google and Intel is aimed at quickly bringing to market a family of Atom processors that will drive Android smartphones, according to Otellini.

The two northern California technology titans have a history of working together to harmonize chips and software on projects including Google TV and Chrome notebook computers.