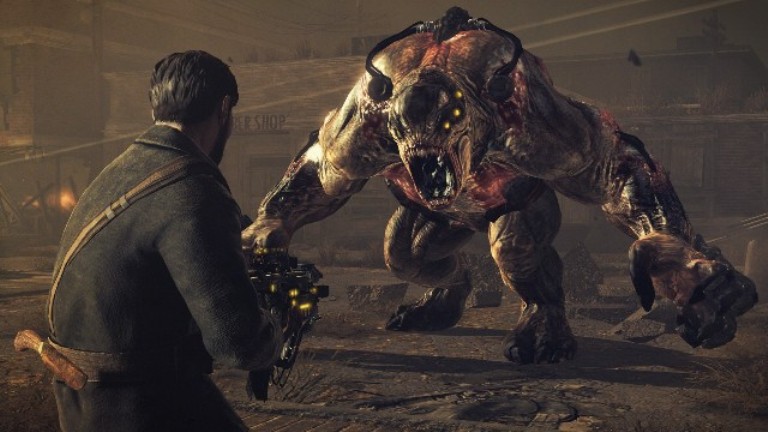 The closing chapter of a trilogy is always the most important. If you botch the ending, any goodwill you may have manufactured in the opening chapters are for naught. Just look at the Matrix trilogy if you want an example of how a weak ending can mess it up.

Unfortunately for Resistance, as far as the narrative is concerned this series is more Matrix than Lord of the Rings. Thankfully, games are more than just plot twists and mcguffins.

Fight or Die
Resistance 3 stars Joe Capelli, who replaces previous franchise lead, Nathan Hale, for reasons that become abundantly clear in the game’s opening cinematic. The game starts some years after the events of Resistance 2. The Chimera have decimated 90 percent of the Earth’s population, and the surviving populace exists literally as small underground communities, hiding themselves from Chimera patrols. Capelli, a former soldier in the fight against Chimera, is now married with a son and has given up fighting, choosing to safeguard his family in the town of Haven, Oklahoma. That is until a Chimera patrol discovers the small town and Capelli is forced to lead a blistering evacuation of the town.

That opening chapter is quite thrilling and action packed, with Capelli and the rest of the town’s men fighting block by block to hold the Chimera back while the rest of the town makes good their escape. So it’s really disappointing that when that chapter closes down, the game’s plot goes into same old, same old mode. “Scientist character” Malikov just appears, because the plot demands it, and sails off with Capelli to Mordor, sorry New York. The game basically devolves into a road trip with Capelli and Malikov trying to get to the Big Apple because there is a tower there that needs destroying because … I don’t know why. It’s all very Half-life 2 — even including a level that screams Ravenholm — except that Freeman would be traveling with Eli Vance, instead of Alyx.

Fortunately the gunplay is way more engaging than the derivative. Resistance is refreshingly old school in its basic design. Health is restored with health packs and Capelli is able to carry 12 weapons, plus a whole stack of grenades and not suffer any encumbrance whatsoever. The lack of regenerative health really changes the way you play the game. Play is much less gung-ho and you’ll tend to be a lot more careful as you push forward. Knowing that stepping out of cover could be certain death really ramps the tension way up. Now we just need to bring back the concept of limited lives.

Resistance’s signature has always been the inventive and unusual variety of weapons on offer, a trend that continues here. A particular favourite of mine is the Me22 revolver, which fires explosive rounds, which are detonated with the secondary fire button. Using the Me22, it’s possible to kill a small group of enemies with a single shot. Another favourite is the Auger, which fires energy rounds that penetrate solid matter, becoming more powerful as a result. This means it’s actually better to wait for you enemies to duck and hide, before you start firing.

You’ll likely develop a favourite weapon as you play, but all the weapons can also be leveled-up as you use them, offering enhanced abilities. It’s a clever incentive to get you try some of the more unorthodox guns, like the Mutator or the Atomiser, weapons that COD vets would likely scoff at.

The Chimera themselves are a cool adversary, coming in a variety of flavours that each demand different weapons and tactics to overcome. There are no wrong ways to kill a Chimera, but as further encouragement to use your entire arsenal, many of the differing Chimera types lend themselves to being taken down with particular weapons. For instance, the new Long Leg Chimera are able to leap immense distances. Their constant mobility makes them difficult to target. The Bullseye guns tagging function, which causes bullets to home in on targets, seems tailor-made for taking out Long Legs.

Despite the variety and options available, however, the campaign mode is still particularly compelling. The inclusion campaign co-op helps with that, but it’s not enough to mitigate the by-the-numbers feel of the game.

Always Help each other… or not
Online is a different matter altogether. Unlike the previous two games, Resistance 3’s multiplayer is much smaller. Where Resistance 2 hand-matches up to 60 players at any given time, this time around it’s a much more manageable 16. The positives for this move are a less chaotic game, where death doesn’t seemingly happen at random and it also has benefits for lag and visual acuity.

The game’s unusual weapons, and players’ clever use of them, is what sets the game apart. Unlike COD, where gun choice is largely aesthetic, different weapons can and will drastically alter your tactics, and learning to master the subtleties of the various weapons will be the key to victory.

It may be simplifying things a little saying Resistance 3 is like COD, but with way more exotic weapons, isn’t too far off. Like COD, there’s levelling up, killstreaks and perks. But at this stage saying whether or not they are better than COD’s is premature. Full four colour process
The first Resistance was a launch title for the PS3 and, fairly or unfairly, had to be a torchbearer for the console. It did a good job, as it was a properly good-looking game. Of course at that point in time who knew that brown was going to be the de rigueur colour for this current console generation?

Resistance 3’s colour palette extends a little beyond the brown that dominated its earlier outings. Brown and yellow for the early levels. Blue and grey for the later ones. It’s not so bad initially, but as the game stretches on, the unending yellow and brown path quickly becomes boring and very uninspired. The models and textures are technically accomplished, but thanks to the colour scheme all the levels look exceedingly samey and eventually it becomes difficult to tell one level from another. This is hardly the game’s fault though, as the visuals match the tone of the setting, but honestly, I can’t be the only one suffering from two-colour fatigue.

Final Resistance
Resistance 3’s gameplay is solid — inventive in some places — and the presentation is technically accomplished, even if it leans towards an almost monochromatic colour scheme. The campaign mode is pure ‘meh’, failing to deliver on the inkling of potential from its opening chapter, making for a very vacuous FPS that we’ve all played a million times before. Fortunately the multiplayer is great, distinguishing itself from other shooters thanks to the game’s broad and versatile range of weapons and perks. As the concluding narrative for the trilogy, Resistance 3 is orrite, I guess. As a totally package it fairs somewhat better, thanks to multiplayer.