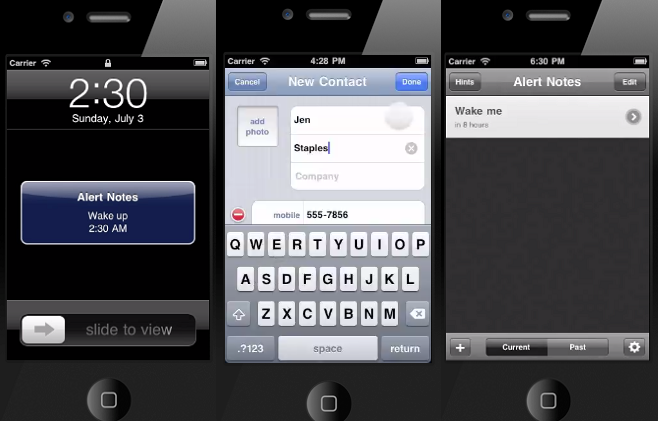 This week I continue my obsession with digital personal organisation (using your iPhone to get shit done, in other words) by taking a look at a sweet little reminder app called Alert Notes, which, by combining note taking and alerts, kills two birds with one stone.

You know how it goes, you think you’re all professional in meetings by typing out short notes on your iPhone instead of writing them down in a notebook, carefully assuring the other party (and yourself) that this list will be saved, and then mailed to your inbox at the end of the meeting so that you can set reminders on your calendar about fulfilling the promises made over that really great coffee and overpriced spicy chicken wrap.

Only to receive a mail a week later, enquiring about those figures you were supposed to send that morning but didn’t because you never got around to checking that list or even setting up those reminders. Embarrassing, unprofessional and something we’re all prone to in this high pace business environment where we’re all moving from meeting to meeting and never getting to spend some quality time alone to organise things.

After reviewing HQ last week, I was told about Alert Notes, a seriously simple app that scanned through your notes and setup reminders according to the details it found in these notes. I scanned over the iTunes info and downloaded it.

The app downloaded quickly enough (I’m really loving these small apps that add a lot more to my device) and armed with a fresh set of notes from an earlier meeting, I fired it up and started pasting them across from Meernotes.

The app’s design is dead simple — nothing fancy, nothing spectacular, just a no nonsense interface that is highly efficient and a serious time saver. All you do is tap the plus button and add your note. Alert Notes then scans through the note and picks up all relevant dates, email addresses, phone numbers, URLs, street addresses and names from your address book, and sets up reminders based on these details. For example, one of notes was to “call Client X on Thursday at 13:00 to discuss his feedback on the new proposal”, the app then set a reminder on the phone for that event and fired it off on Thursday at 13:00. I then called my client by simply tapping on the ‘more options’ button for that specific note and tapped on his name when his address book record popped up in the app. Simple, efficient and professional.

So needless to say, Alert Notes is a great companion for any business person trying their best to stay on top of the thousands of things they have to remember, but it works just as well for your personal life too. From simple notes like “return the DVD rentals to the store tomorrow at 11:00” to more complex and information intensive notes like “pickup my Coldplay tickets from 32 Smith Street today at 16:00” (the app even gives you the option to search for that address on your maps app) are all handled extremely well by the pint-sized powerhouse of an app. One thing I would’ve liked to see in the app however is a remind me later (snooze) function for when you’re busy and a reminder pops up on your screen. Right now, the only options are to view the reminder, or close it. This would definitely help quite a bit as, lets be honest now, you’re not always ready for those reminders. Now I must admit that I’ve been checking this app out for the last week and really enjoying it but am a bit worried about its future after seeing the launch of Siri tonight, which basically incorporates the core functionality of this app in amongst a whole plethora of other features within iOS 5, the new operating system for the iPhone and iPad. I think that Siri is only available on the 4S now though so the developers certainly have some time to think about this. Also, I do hope that the app is iOS 5 ready, especially since Apple have completely overhauled the notification system. I guess we’ll see next week.

All in all though, Alert Notes is a really great idea that is pulled off superbly and at the moment, a great addition to my productivity folder and something I’m using on a daily, if not hourly, basis.