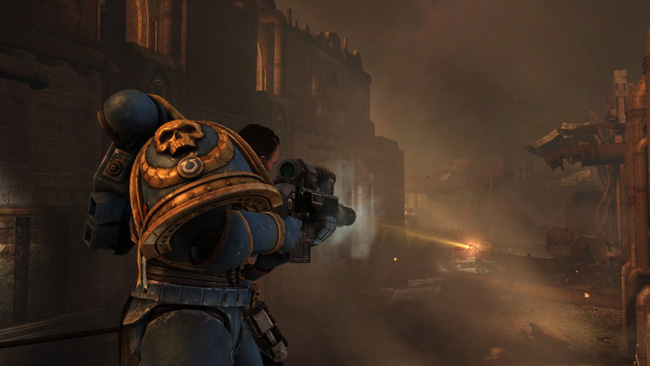 The Warhammer 40 000 series has a go at a next-generation console title. But what does this mean for diehard fans of the series and Relic Entertainment’s direction for the Warhammer Universe?

“…We aim to make smart games for smart gamers” is part of Relic Entertainment’s philosophy. The Canadian developer behind the Warhammer 40 000 video games has finally taken a stab at stripping the strategy element the series is so well-known for, and finally put the gamer firmly in the action –– in the shoes of a Space Marine. But why have Relic taken this direction, and does the Warhammer 40 000 universe translate well into our generation’s console-gaming?

Haven’t I seen this movie before?
The gameplay makes use of a 3rd person action/shooter hybrid that plays like Gears of War with a dash of hack and slash. You play the role of Captain Titus, an “Ultramarine” with a penchant for Ork stomping. The story starts with Titus landing on an Imperial Forge World under attack from an Ork invasion. Armed with the usual fare of melee and ranged weapons Titus must hack, slash, stomp and shoot his way through hordes of Orks to save the Planet. The story is nothing original and it reads something like a straight to DVD sci-fi movie. There are some bad guys, some good guys, a small twist, a space-time fracture and the credits. Unlike watching a B-grade sci-fi though, the credits are not the best part luckily.

Everyday I’m Stompin’
The gameplay is solid, and at times very fun. The shooter element plays out like Gears of War, just without the cover system. Perhaps in a day and age where every console game has a cover system, it is somewhat refreshing to play a game that encourages you to get into the fray rather than hide from it.

This seems to be Space Marine’s ethos: get bloody or die trying. The health regeneration is perhaps the one unique thing to the game. Gone are the days of health packs; most modern shooters use the hide from the action until your health automatically recharges method. Space Marine dares to be different; instead Titus gains health by performing Executions. Executions are stylish finishing moves that can be performed on almost all enemies once they have been stunned. This means you have to get up close and personal to get health back.

The Executions are definitely one of the best things about the game. Each melee weapon garners different Executions and all are stylish, full of gore, and done in slow-motion. There is just something satisfying about ripping an Ork’s head off with your bare hands while your axe pins him to the ground, or maybe it’s just me. Ultramarine?
The melee combat is fun, but gets repetitive very quickly. Besides the Thunder Hammer, all the melee weapons feel the same and each despatch Orks effectively. There are a limited number of combos and they remain the same for all the weapons. This means after about 30 minutes of playing time, you have seen almost everything the game has to offer.

The only thing that breaks the monotony in combat is the sequences where you attain the Jump Pack. The Jump Pack works like it sounds, a small boost lifts Titus above his enemies where he can aim at a highlighted area on the ground and rush in for a ‘ground stomp’. These sequences are where the game shines, the levels gain more dimension, and you finally feel like an Ultramarine. Like a Haiku, the Thunder Hammer and Jump Pack work together like poetry. Also like a Haiku though, these sequences are very short-lived.

Hold this Multiplayer
Online mode provides a mere two options, Annihilation and Capture. Annihilation comprises of a team deathmatch scenario that is both frenetic and fun. The small maps make for intense battle and a match doesn’t go on for much longer than five minutes. Capture on the other hand, is one of those annoying hold this position for so long until you win modes. This kind of multiplayer appeals to some but others might find it tedious. There were some connectivity problems; the strangest one being where the map loaded and then froze, the only option was to quit the game altogether. The multiplayer is not perfect, but it will provide entertainment to the socially-inclined Space Marine in training. We have seen these multiplayer modes done before and we’ve seen them done better. We got an Ork problem here
Space Marine is a good-looking game. From the epic scale of the levels to the blood and gore, it is easy on the eyes. However, the graphics do suffer from some inconsistent level design. The game is very linear and Titus moves along “narrow corridors” of game space, similar to Gears of War, but without the strong level design. There is no motivation to explore, in fact Titus will get stuck to the confines of the level all too often; his arch-nemesis, naturally, is tiny rocks. If only you had a penny for the amount of times you’ll get stuck running on the spot next to a tiny piece of rock… It is here that the “epic” scope fails and in the end you don’t feel too Ultra after all.

The music is epic enough, if forgettable. Orchestral Danny Elfman-esque crescendos make for nice background music to the crushing sounds of Orks limbs being stomped. The sound effects are satisfying, especially during close quarter combat. The voice acting is very good, but with such a bland story and characters it is hard to care for Titus and Company in the end.

Final Execution
Overall Space Marine is a fun game if not a very original one. Besides the Warhammer 40 000 universe, the game is practically a Gears of War clone with some hack-and-slash thrown in. This might not necessarily have been a bad thing if Space Marine had its own voice. Perhaps the attempt to capture the console market meant that Relic had to sacrifice what Warhammer 40 000 is known for: Strategy. For a company that prides itself on making smart games, here is a rather dumb one, neither bad nor great, somewhere in that Ork-ward space between. It’s not that Warhammer couldn’t translate into an excellent action game, but it’s a shame that Relic didn’t take enough chances while moving the Warhammer 40, 000 series to next-generation consoles.

Let us know what you think about Warhammer 40 000: Space Marine? 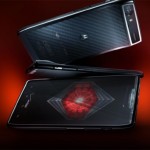