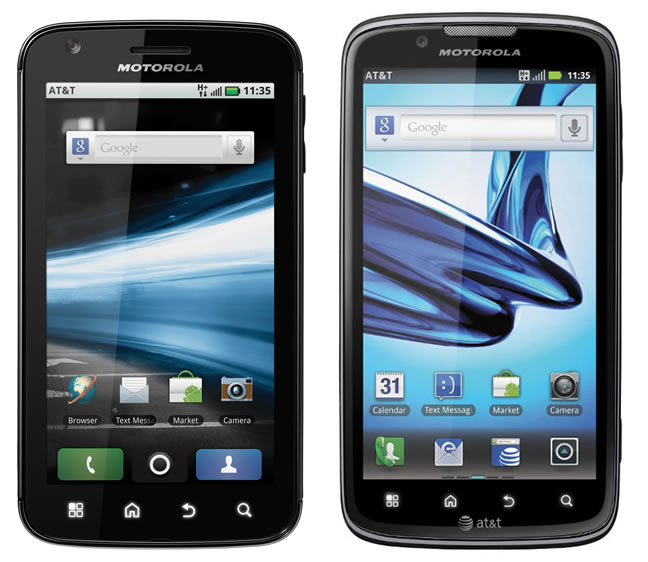 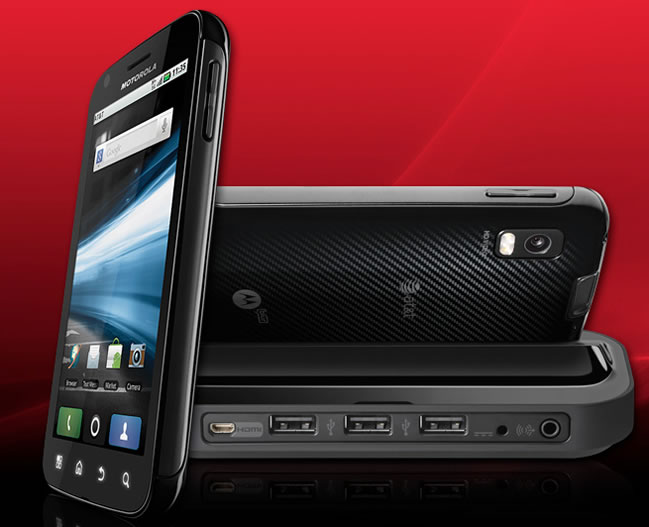 You could see this piece from two perspectives.

It could be a belated review of the Motorola Atrix. Belated because, as the Atrix is permeating its final markets and we’re sending back our review units, the Atrix 2 is announced. Out with old, in with the new, right?

Or, you could see it as a timely piece that could offer some useful buyer’s advice. The latter perspective stems from the likelihood of a reduced price on the original Atrix, which is actually not that far behind it’s newer, genetically gifted brother.

Looking past the swagger it derives from its Transformer-like accessories, the original Motorola Atrix — or Atrix 4G as it’s known in other parts of the world — is still a powerhouse Android device in its own right, even 8 months after its introduction.

At the heart of the Atrix lies a 1GHz dual-core NVIDA Tegra 2 CPU with an ample 1GB of DDR2 RAM. Widget-centric MotoBlur enhances the stock FroYo experience somewhat and doesn’t seem to ostensibly slow down stock performance. It’s important to note that by now Gingerbread is widely available for the original Atrix, and is even scheduled to receive Ice Cream Sandwich in 2012.

The responsive, 4-inch 960×540 qHD Corning Gorilla Glass display allows for plenty of viewing real estate, but being PenTile Matrix and only 275ppi, it manages to deliver a good, but not mind-blowing viewing experience which also suffers somewhat in bright sunlight.

The Atrix has both a front- (VGA) and rear-facing (5MP, auto-focus, dual-LED flash) camera and the ability to record in 720p. The rear-facing camera delivers great — point and shoot caliber — still photos, including macros, but unfortunately goes into fix-focused mode when shooting video.

At the top, you’ll find a 3.5mm headphone jack as well as biometric fingerprint reader for unlocking the Atrix, which I found to be quite novel, and yet at the same time, fairly extraneous and presumably a way for Moto’ to tout another Android smartphone first. The fingerprint reader also acts as lock/unlock button.

Finally, there’s a speaker grill at the bottom back, volume rockers on the right, and on the left micro USB and HDMI connectors which in tandem function as the all important dock connectors.

As far as styling goes, apart from the dapper looking diagonal pattern of the removable back, and the usual Android buttons on the front, the Atrix is fairly unassuming. It’s 117.75mm in length, 63.5mm in width and despite the hefty internals, remains a mere 10.95mm thick and weighs only 135g.

The Atrix is still sleek looking, even compared to the more avant-garde designs that surfaced since it’s introduction in February. Although its classic design leads to a decidedly sedate appearance, it’s perhaps more timeless, and as it was 8 months ago, still a calculatedly restrained prelude to the main event; Webtop. 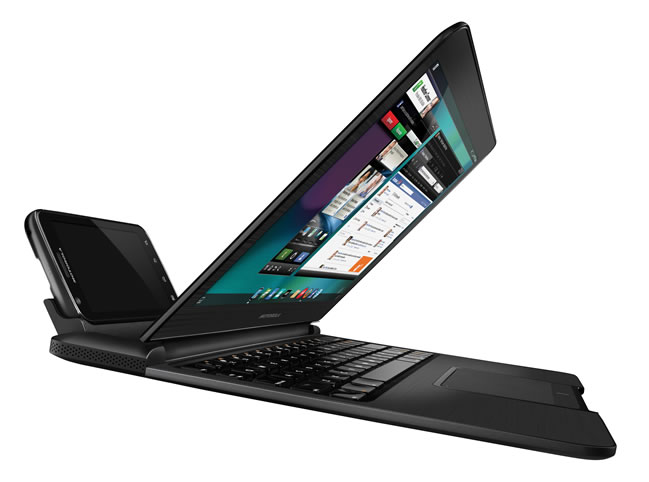 Luckily, despite the physical dimensions of the new Lapdocks and the 500 offering Power over Ethernet charging and a front-facing camera, not much has changed fundamentally. The two new docks still run Motorola’s instant-on, Linux based Webtop application and besides a bump up from Firefox 3.6 to Firefox 5, offers much of the same software functionality.

I find the Webtop concept and Lapdocks compelling. The amplification of the phone’s abilities, the large display, full keyboard, trackpad and additional battery power that charges the Atrix while it’s docked. 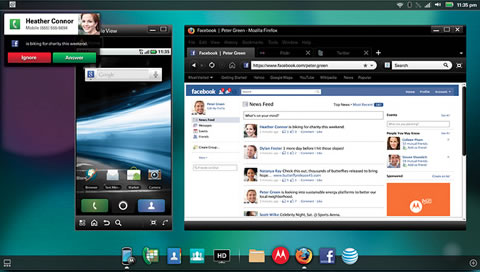 Yet, it feels like the idea isn’t yet fully realised. The performance of Webtop is sluggish, and the feature set is limited. An Atrix docked with a Lapdock is essentially a Chromebook, or a netbook limited to only a web browser, an application that runs an enlarged version of your phone’s UI and Entertainment Center for an enhanced media experience.

That said, users with a Citrix account can also use the Citrix Receiver to access virtual PC desktops as well as Windows, web and office applications hosted on Citrix XenDesktop for a more desktop-like experience.

Moto’ is offering the original Lapdock at a price of $500 directly from it’s online store, but there have been reduced prices ranging from US$250 to $350 since the new docks were announced.

My advice is this. If you already have a laptop, don’t think too long about the Lapdock aspect of the Atrix.

If you’re looking for a new laptop for the same price or less, consider a laptop, high-end netbook or even a tablet first.

When is the Lapdock a good option? Tough one.

Of all the accessories for the Atrix — of which there are more than 50 — the more modestly priced $100 HD multimedia dock (not to be confused with the Standard dock), often bundled with the Atrix, deserves the most consideration, especially in the living room.

It offers identical functionality to that of the Atrix 2’s HD Station.

If combined with a new or existing Bluetooth/USB keyboard, mouse and HD display, the HD multimedia dock delivers the same Webtop experience as the Lapdock. The dock essentially allows for a desktop PC configuration. Though cheap, this configuration is limited by Webtop and arguably Citrix, so would you really want to use this setup for serious desktop computing?

The Entertainment Center application on the other hand, will shine on your big 42-inch HDTV, especially if you combine it with the included wireless remote.

Finally, the HD multimedia dock has 3 USB ports and an audio output if you’d like to jack it into your home audio system.

Would I recommend the dock? Not really. The Atrix has DLNA support and you can connect the phone directly to your HDTV via the included HDMI cable for mirroring anything that’s on your phone’s display.

So it’s clear, the accessory eco-systems are mutually exclusive, but offers almost identical functionality. If you get the original Atrix, you’re not being left out in the cold, and yet, this isn’t really about the accessories as I’ve explained. So how do the phones compare?

As it turns out, the Atrix 2 isn’t that much of a departure from the original.

The Atrix 2 also has a 1GHz dual-core CPU, but it’s an OMAP 4430 from Texas Instruments — which also means almost identical GPU performance — and the same 1GB of DDR2 RAM. It’s sold with Gingerbread and is also scheduled to receive Ice Cream Sandwich in 2012.

Like the original Atrix, the Atrix 2 also has a, 960×540 qHD Corning Gorilla Glass display, but is slightly larger at 4.3-inches and notably, is non-PenTile Matrix, while the pixel density drops slightly to 256ppi.

The rear-facing camera in the Atrix 2 is higher at 8MP — single LED flash — and has the ability to record in 1080p.

The Atrix 2 is slightly longer, wider and thinner than the original. The measurements are 126mm x 66mm x 10 mm and weighs slightly more at 147g.

Finally, the Atrix 2 has a faster radio and supports 21.1Mbps HSPA+.

If you’re looking for a bargain and can get the original Atrix for a reduced price, it deserves some serious consideration. The Atrix 2 isn’t that big of a departure from the original, and the accessory eco-systems, though mutually exclusive offer near identical functionality.

Overall the original Atrix, on its own, is still a fantastic device, even 8 months after its introduction, but don’t dwell too long on the compelling, yet, nice-to-have, accessory eco-system.

Android lovers looking for something different. Possibly bargain hunters – still being competitive 8 months after the fact, the Atrix is likely to see a price drop with the introduction of the Atrix 2. 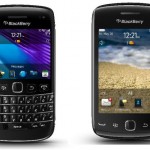