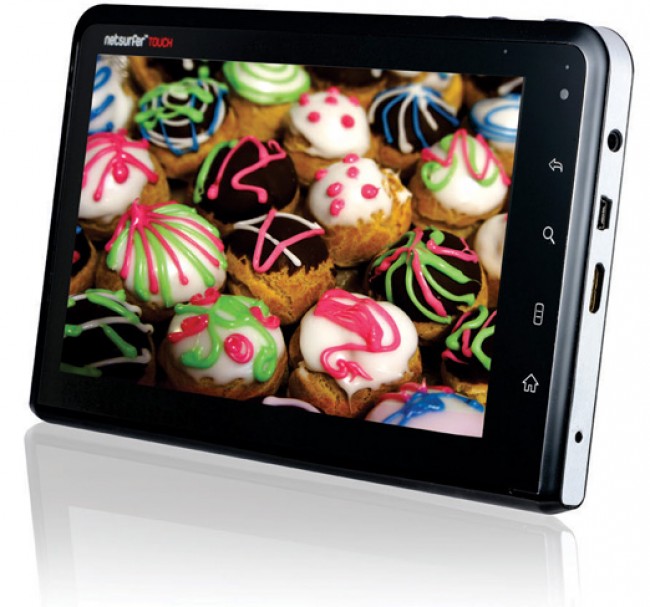 The Netsurfer Touch is a R2000, 7-inch tablet running Android 2.2 (commonly known as Froyo). It’s the first of its kind really; a proudly South African device aimed at the little people aching to get their tablet groove on. Can it compete with the Kindle Fire and the BlackBerry PlayBook, two other 7-inch tablets with similar specifications? Does it even want to compete? We take a closer look at the Netsurfer Touch, the first tablet from Future Mobile Technology and a 3G/Wi-Fi ready device which is definitely going to make an impact on the sunny shores of South Africa.

I’m impressed by the chunky feel of the Netsurfer Touch. It’s a solid device, with a mere three physical buttons, namely volume up/down and the power switch. All are fairly responsive and fit well with the aesthetics of the device.

The touch buttons on the right of the device are cumbersome and finicky. Four soft keys line the right of the tablet: Home, Options, Search and Back. These keys are standard with any Android device but seem desperately out of place on the Netsurfer. Also, they don’t light up. This may seem like a minor issue but in bright light or darkness, fumbling around for the correct soft key is a pain the ass. With a tiny hardware upgrade, the keys would have been functional instead of impractical (like it is now). Once you’re playing around with the tablet, the soft keys become an afterthought and the user interface thankfully takes over.

Other inputs include a microSD card slot (supports up to 32GB), an audio jack, a micro-USB port and HD output (maxed out at 720p).

I love the heft of the Netsurfer. It feels like an expensive tablet, despite its budget roots. At 669g, it’s the right weight and feels natural to hold in either landscape or portrait format. It’s not svelte like the iPad, or luxurious like the Kindle Fire, but it holds its own against the competition. Let’s get this out of the way. I initially hated the Netsurfer’s choice of operating system. Froyo, in 2012? Come now. But after a few days of playing around with the OS, I begun to love it for what it is. A no-nonsense OS which when side-loaded with the right apps, manages to break free of its archaic past.

I put down my initial irritation to the frustrating SlideMe market. If you’ve used anything past Android 2.3, then you have been lucky enough to use a decent OS. SlideMe is simply not sufficient for my needs. But let’s put the shoe on the other foot. Would I need a market filled with the latest and greatest apps if I was a humble consumer new to the tablet game? Probably not and in this instance, SlideMe becomes the ideal app market.

Thankfully, Android is an open OS and plugging the tablet into a computer opens the device up as easily as browsing an external hard drive. When compared to the backwards and closed environment of Apple’s iOS, I was frankly blown away by how easy it was to edit my content on my device. The Netsurfer truly felt like it was mine, opposed to my iPhone which still feels like a foreign device which I am merely “renting” until the inevitable upgrade.

Side-loading is the art of copying an Android APK from the computer to your device. This is what I had to do to turn the Netsurfer from starter tablet into a turbo-charged device which pissed lightening and shat thunder. I loaded Facebook, Gmail, Twitter, Foursquare, and an endless number of emulators until the device creaked with software. No native support for any of these apps comes with the Netsurfer, so side-loading is your only option. Trying to find these apps on SlideMe is an exercise in futility. But for those who are determined to give SlideMe a go, it’s easier to search for your desired software via the “search” soft key button when inside the SlideMe market. For anything else, there is the Opera apps store. Still, side-loading is the only method I’d advocate for the tech-hungry geeks of the world. Note that you don’t have to install any apps to use the tablet. The apps I installed can be accessed in web form on the Android browser.

With the OS finely tuned and the bloatware removed, the tablet became mine. I used it everywhere. In the car as a music player, on the plane as a Gameboy/Super Nintendo/Sega Genesis, in meetings as a notebook replacement and in place of my iPhone as an on-the-go web browser. I knew deep down in my heart that it would never replace my phone or laptop, but I found that I would use it more as my in-between device which actually brought me a mote of pleasure.

I could play games again. The iPhone’s screen was too small for decent gaming and my laptop was woefully underpowered. This alone places the Netsurfer in a high regard. Console emulation is one of the device’s hidden secrets. Here’s where I had to learn to make a few adjustments. I was used to the nippy speed of my iPad, so when webpages decided to crawl as I scrolled through them, I had to put my foot down. It drove me mad; why would this seemingly powerful tablet with an ARM Cortex A9 dual core CPU have a heart attack every time I visited 9Gag.com? It was down to the native browser. I sideloaded Opera and my troubles were over. Web pages flew, scrolled smoothly and presented no issues. Android standard browser, shame on you.

Everything else the tablet is meant to do, it excels at. Full HD films play without a hitch and look magnificent on the 480×800 screen. Music plays well, but only sounds decent with a quality pair of free headphones plugged in (which are thankfully included). Android games are smooth and enjoyable, but nothing beats Marvel VS Capcom care of the MAME emulator. With 512MB RAM and 8GB of internal memory, the standard user will rarely run into a software roadblock.

A 7-inch, 480×800 capacitive display is the ideal solution for a device of this calibre and price. It’s not going to beat the glossy screen of the iPad, or the 10.1-inch monster display of the Xoom 2, but it is going to put a smile on your face when content displays in Full-HD.

The screen is responsive, but surprisingly dull and washed out when navigating the UI, as if the resolution is lower than it should be. Regardless, when 1080p content is displayed, the colours are sharp and crisp once more. I’m putting this down to Froyo’s underpowered design more than the Netsurfer.

Sound is loud, but distorts at high volumes. Nothing much to say here, other than the speakers are located on the left of the Netsurfer and work adequately. Did I mention it’s a phone as well? Slip in a SIM card (which is a bitch to do) and you get one of the largest phones in existence. My suggestion? Grab a Bluetooth headset if you want to avoid stares on the street and office. Talking into a tablet will make even the largest Viking look like a mental case. There is also the option of using the free included headphones .With the SIM card inserted, the tablet also turns into a free-roaming  3G wireless device. Pretty fantastic for a R2000 tablet.

And yes, there’s a camera, but only a front-facing one. Future Mobile Technology, the company behind the Netsurfer has promised that a rear camera will arrive in the later models. Personally, it isn’t the biggest worry, but for those who are looking to replace their mobile phone with the Netsurfer, this may be a deal breaker for them.

It’s a great tablet. Inexpensive, packed with features and aimed at the emerging markets. If you’re considering a second tablet, this is the device for you. If you are new to the tablet game, this is the first device you should consider picking up. Future Mobile Technology has hit on a winner here and later versions, which will run Android 4.0, should be ever more daring in design and technology. This is a dynamite tablet.

Gear it or burn it?

The Netsurfer Tablet retails for R2000 and is available in select PEP stores across South Africa. 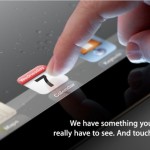