The Galaxy S III is so close we can taste it and this teaser site from Samsung is counting down the hours until something mysterious is released.

This is how Samsung dropped the teaser site:

Samsung fans were quick to decode the tweet and find their to the site.

“tgeltaayehxnx” is an anagram for “The next Galaxy” says consulting web detectives AllaboutSamsung.de.

Obviously, the S III isn’t launching today, it’s scheduled release is in two weeks on 3 May so we’re just going to have to wait it out a few more hours and see what’s happening. Our best guess is that there’ll be a sneaky reveal of the S III hardware. Keep checking this article as we update the teaser site’s progression. 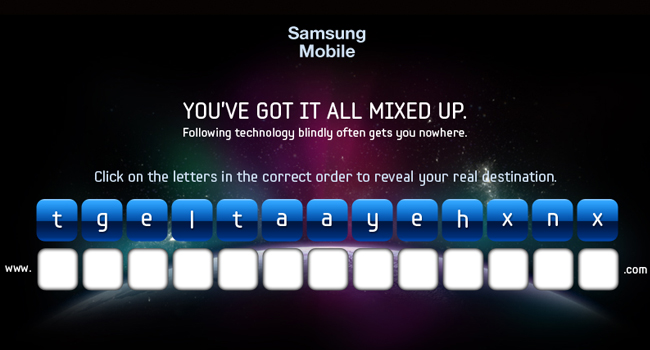 The update proved to be nothing else, if not a complete waste of our fevered anticipation. A video tells us that “Truly smart technology becomes a part of natural life,” blah blah. “Your view of the world grows even larger.” And then the sheep appear. “You can stand out from… everyone else.” The video ends with that familiar blue and white oil stain and a the Samsung Mobile Unpacked 2012 logo. Whatever, it’s meaningless but 3 May should at least provide us with the real S III to drool over.