US$258 for the Mutewatch seems like a kick in the money-crotch, but it’s a gorgeous time-telling whisper on the wrist.

Look at the pictures of this hipster delight. Just look at it. This poppy red/charcoal grey/pure white watch is as basic as time-pieces come. It’s simply designed as well, with cool sounding features such as an “automatic adaptation to the surrounding light intensity for optimal glow”, which means that it gets brighter as it gets darker. Whatever. Tap the surface of the Mutewatch and the time displays, or flick your skinny wrist to active this feature.

Swipe the surface to cycle through the three features: alarm, clock and timer. Here’s the clever part. The time is set in a very iPhone sort of way. Tap to hold, wait for the Mutewatch to vibrate and then tap the numbers to set the time. The alarm works with the same tap-to-change method. To erase an alarm, simply pinch the screen.

More cleverness. When the alarm activates, the Mutewatch vibrates in lieu of a terrible and screeching chime which accompanies most alarms. It’s called the Mutewatch after all, not the loud-as-all-hell watch. There’s a long, and short vibrating alarm, all depending on the “urgency of the situation” according to the Swedish company who built it.

Mutewatch charges via USB, and its firmware is automatically upgraded during the charging process. Fancy and slick, just the way Gearburn gadget lovers like it. But at close to US$260 for a piece of capacitive, time-telling plastic, is the Mutewatch worth shouting about, or just another fart in the wind? Order the Mutewatch here and decide for yourself. 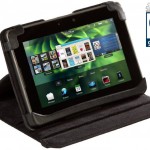