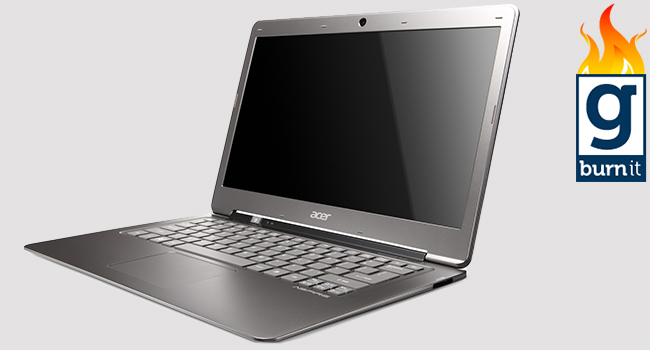 The progress of technology is astounding. Every couple of years, computing power doubles. We keep packing more features into mobile devices. Features such as GPS, Accelerometers, Quad Core Graphics and resolutions so high you cannot distinguish the pixels anymore.

My cellphone now has a faster processor than the Windows 7 machine I’m typing this review on. Notebook computers are getting lighter, faster and have more battery life than ever before.

So you’d think that these days PC manufacturers would have figured out how not to f**k up the small things.

The Acer Aspire S3 is an Ultrabook. You know, that category that needed a US$300-million investment from Intel to spur on PC manufacturers to pull their heads out where the sun don’t shine and actually figure out how to compete with Apple and its Macbook Air range.

This means the Aspire S3 is highly portable. It’s light enough to carry around with you everywhere and small enough to put under the seat of your scooter as you ride to your local Caffe Neo for free WiFi. It’s even beautiful enough to actually take out of your bag and not feel embarrassed as you plonk it down on the common table between all the Macbook-toting hipsters.

Unfortunately, that’s where things start going wrong. You press the on button, fully expecting that it would start up instantly, and then you wait a few minutes for everything to start up. And this would be a reasonable expectation… you see, the Aspire S3 very cleverly uses a combination of a high-speed 20 GB SSD (Solid State Disk) and a much larger traditional spinning hard drive. In theory, the 20 GB SSD could be used for storing and loading the Operating System. Or so I thought. Unfortunately, its only purpose seems to be that you can use it to “hibernate” your machine as you zip between coffee shops. So yes, you could perhaps fool the hipsters into thinking you have a really fast laptop, but only if you’re waking it up from hibernation mode. Not when you’re actually restarting your machine after un-installing the bundled McAfee anti-virus software.

I get the feeling that somewhere in the Acer factory there’s a really great engineer who came up with the idea of using the SSD for super-fast bootups and frequent operations and then saw it being overridden by a senior manager on a deadline to ship. That engineer is probably crying himself to sleep every night.

But to make things more depressing, for that crybaby engineer as well as for the poor suckers who actually fork out R9 000 for this laptop, it’s so bloated with crapware, any chance of a fast bootup is entirely lost. I counted no less than 20 pieces of unnecessary software, including McAfee, the anti-virus software that was invented by John McAfee, recently arrested for illegal drug manufacturing and weapons possession.

Okay, so let’s say you remove the crapware and you figure out how to install Windows or Linux so it makes full use of the SSD (Linux guide here, you should have a super fast, super light i5 powerhouse in the making.

Yes, you would. But unfortunately, this is where the small things start to matter.

You see, the screen hinge is of such poor quality that everytime you type a letter the screen wobbles and shakes as if you’re on a small dinghy in Table Bay. Acer seems to find it particularly difficult to build a decent trackpad. It does have two finger scrolling, but it takes about half a second before the scrolling actually starts to kick in. That’s if it kicks in, as sometimes you have to click back and forth between programs before the scrolling function works again. The power cord itself is one of those archaic black contraptions and weighs almost as much as the laptop itself.

So yes, you may feel okay using this gorgeous looking laptop at Caffe Neo, but you’d probably make everyone at the common table dizzy and if you run out of juice and pull the ugly power supply out of your bag, you can kiss your coolness goodbye. Forever.