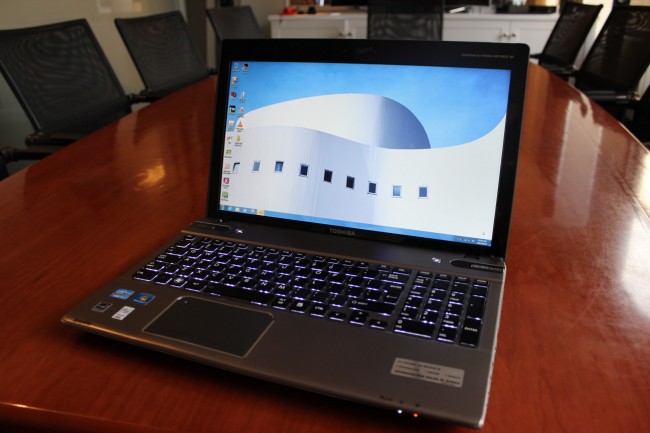 3D is all the rage these days, or at least it’s trying to be. Hardly a week goes by that another 3D movie isn’t released, but with the hefty price of tickets, not to mention cinema confectionery, not all of us can afford to indulge on such regular basis. Which is where Toshiba’s almighty Satellite P850, boasting glasses-free 3D, comes in, or tries to.

The P850 (as I’ll be referring to it from here on out) is a chunky machine, but with relatively good reason; it packs a whole lot of muscle and the tech that makes glasses-free 3D possible. Despite its pretty normal 15.6” dimensions, 38.5cm x 25.3cm x 3.5cm (at its thickest point), it feels bulkier that it is, and that’s probably due to its weight, which is just shy of 3kg. At least though, it’s a solid 3kg. The P850 feels very sturdy and there was almost not flex to speak of, no doubt in part thanks to its brushed aluminium casing. Speaking of which, I wasn’t overly fond of the particular “brush” that was used, it makes the casing seem plasticky and look cheaper than it is. Which is kind of big deal considering the much more sveltely-clad, aluminium notebooks that it has to compete with. On the other hand though, aesthetics are always a highly subjective, and divisive, element and I’m sure there are loads of people who will love the scaly cladding, I’m just not one of them. The entire machine is clad in the aforementioned aluminium armour, leave for the screen’s bezel which is black plastic. Pop open the lid and you’re treated to an expansive, backlit keyboard that also sports a numerical pad, a feature which is increasingly becoming the norm. Two black speaker grills, adorned with Harmon Kardon branding, are perched just above the keyboard and next to each is a single, round button — the dedicated 3D button on the left and the power button on the right. The trackpad is just left of centre, directly below the spacebar.

One of the great things about the P850 is that it gets that you can never have too many ports, of any kind. It has four USB 3.0 ports, two on each side, an HDMI input, an Ethernet input and a VGA slot. I really appreciate that all the USB ports are of the newer variety. There’s honestly no longer any point for new devices to support that kind of legacy hardware (except when costs need to be shaved), and the increased speed shows. On the left lip there’s also a tray loading Blu-Ray drive, which is very nice touch and kind of a no-brainer considering one the machine’s primary purposes — viewing HD, and often 3D, footage.

I’m sad to say that using the P850, at least from a physical/input point of view, was not one of favourite experiences.

The keyboard’s keys lack depth and travel, and feel almost spongy when you push them. I also didn’t like the glossy coating which quickly picked up finger grease (don’t act like you don’t have any) and turned typing into a demanding, frustrating practice. Some points awarded for it being backlit, but otherwise it was mediocre performance. The Mac Book Air, it ain’t

I wish I could say the trackpad was better, but it’s really not. It’s also too smooth for my liking and the lack of physical buttons didn’t help. Basic scrolling was fine, but the minute I tried to attempt anything slightly more precise the jig was up. The trackpad supports multi-finger gestures, but I’d honestly recommend that you just get a wireless mouse.

One area in which the P850 did not disappoint was entertainment and performance. As is the case with most heavyweights, it packs quite a wallop. Under the hood is a 3rd generation Intel Core i7-3610QM Processor with a clock speed of 2.3GHz with turbo boost up to 3.3GHZ, 8GB RAM, an Nvidia GeForce 640M graphics card and a 680GB harddrive. All of which make for a fast, powerful user experience.

Watching videos on the 15.6” TruBrite Full-HD LED was an absolute treat. The picture was always crisp and clear and playback didn’t lag once, even with an external monitor plugged in and while running multiple programs at the same time. It’s just a shame that the screen isn’t bigger so that you could share it with more people, thankfully though there’s an HDMI-out for exactly that purpose.

The Harmon Kardon speakers also performed very well. The sound was much fuller than is the case with most other laptops and even at full blast there was very minimal distortion. Obviously they don’t have enough power to be the life of a party but they are more than adequate for daily content consumption and you’ll only really need to employ external speakers when you absolutely have to feel the bass. The P850 also features Toshiba’s Sleep-and-Music functionality, which lets you use the laptop’s speakers to play music from an external device, without the laptop having to be on.

Gaming on the P850 was a breeze and it easily ran games like Diablo 3, Crysis 2 and Starcraft 2, albeit one at a time. My only issue was with the keyboard, which I soon abandoned for an external one.

Now, of course, it’s time to talk about the elephant in the review: glasses-free 3D. Let me just start off by saying that I’m not a huge fan of 3D in general, only because I believe that 90% of the time it’s used as a gimmick to lure more, naïve customers and rarely actually enhances the viewing experience. Still, as a reviewer it’s my duty to approach all aspects with an open mind, which I did. Actually, I did more than that, I went in full of hope and optimism; maybe this was the machine that was going to change it all, maybe I just needed to see 3D just for me, in the comfort of my own home. Turns out that’s not the case.

This is what we pay the big buck for, 3D

The P850 puts in a valiant effort, but it’s just not up to scratch. It came pre-loaded with a few, proper 3D movie trailers, which I watched only moments after switching it on for the first time. They made me feel dizzy. Hitting the magical 3D button causes the images to pop off the screen, as you’d expect, but every now and then they’re just slightly off, enough to be noticeable, both to the naked eye and your brain, and the latter pays for it dearly. As soon as 3D is engaged the image loses a significant amount of sharpness and it looks a like a very fine, black mesh has been laid over the screen.

In addition to being able to handle made-for-3D footage, there’s also a convert-to-3D function and it’s terrible. From my attempts I learned that it only works with MP4s and even then it doesn’t always work. The times that it did work, it didn’t really. The image was seldom, if ever crisp and you’d be better off simply watching your movie/series in its intended format.

All 3D content has to be watched with the Toshiba Blu-Ray Disc Player, which is already a bit of nuisance, but one I’d be willing to put up with if the 3D was actually worth it. The interface isn’t great and you have to manually switch between different types of conversion to get 3D depending on the kind of footage you’re watching. It’s a small issue, but something I feel I as a customer shouldn’t have to deal with. I should be able to simply hit the 3D button and enjoy 3D content regardless of its original format.

Battery life and boot-up times weren’t bad: generally the battery lasted a relatively decent 4 hours, unless I fired up the 3D, in which it was sucked dry in less than an hour; cold start-up took roughly 30 seconds, and start from sleep was around two seconds. It also has Sleep-and-Charge functionality, which is exactly what it sounds like — you can use the USB ports to charge external devices while the laptop is off.

What it all comes down to

The P850’s biggest downfall is that it is touted as a glasses-free 3D laptop. Sure, it’s slightly let down by a few other features and personally I wasn’t crazy about the design, but at its core it’s a workhorse that revels in gobbling up high-def footage and running high-spec games without breaking a sweat. That’s not the reason people are going to buy it though, or at least not the primary reason, they’re going to buy it because of its stand-out feature; glasses-free 3D, and they’re going to be disappointed.

Even so though, I’m still tempted to say it’s not a bad purchase. The cheapest price I found online was a hair under R13k, which, considering the impressive specs and notable features, is very reasonable, even without the mediocre 3D. 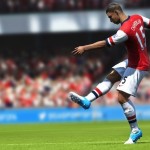