Yes, the very rare and expensive Google Glass has been given a thorough shakedown. Star Simpson and Scott Torborg are both former students at MIT and have been overcome by their curiosity to dissect Google’s popular head-computer.

In the introduction of their post the teams states the following: “Growing up on a rich diet of dystopian tech fiction, we were filled with both intrigue and concern about Glass and decided to take our model apart to bring you a detailed view into the electronics guts of the device.”

Google Glass is entering (very slowly at that) our dear world in an attempt to disrupt and redefine the idea of wearable tech. Still many questions linger unanswered. It has its share of controversies ranging from privacy to fashion. Sociological analysis is all good and well, but most people just want to know what’s under the hood. So it was time for Google Glass’s privacy to be stripped. Simple questions such as is Glass hackable and easily repairable, or simply what’s behind this mysterious advanced technology? Although the scraping and tearing through glue and plastic, this poor fragile Orange Glass model has not been taken to the guillotine per se. The team holds testament to the fact that after “peeling the orange,” they where able to resemble Glass and that it “operated perfectly, albeit with cosmetic damage.” So apart from the actual teardown what did the team manage to uncover.

So some interesting specs include the touchpad designed by Symantec which you’ll probably be using a lot. The battery is a very poor single-cell 570mAh and is located in a rounded bit behind the wearer’s ear. It also carries 16GB of flash memory and an Elpida mobile DRAM chip. The display that would be geared in the top right corner of your vision is a tiny 640×360 which according to the team is roughly equal to 1/8th of “the physical width of those on the iPhone 5’s retina display.” This display is engineered to appear “to float a few feet from your face.” The camera seems to be the standard smartphone-level size.

Although many engineers and geeks alike are itching to tear these goggles apart, the team urges users “not to try this at home.” 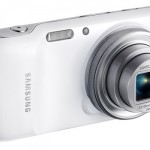