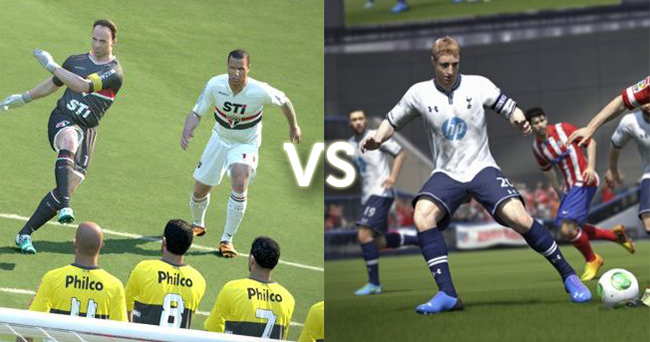 Football, eh. It’s the people’s game. Simplicity incarnate, you need only a spherical ball and a couple of goalposts to play. But what if you’re more of an armchair football aficionado? What if you’re someone who prefers wiggling thumbsticks to kicking a ball around, but still wants to act out the beautiful game? You really only have two choices: EA’s Fifa series or Konami’s Pro Evolution Soccer.

In recent years the choice has been easy. Fifa has always had glitz and glamour, but by borrowing gameplay ideas from its rival it’s become more realistic too, making it the all-round choice.

It wasn’t always that way. Ten years ago Pro Evolution Soccer was king – a game designed for the real football fan whose eyes were attuned to the subtleties of the beautiful game. Fifa, in comparison, was a circus clown; a fast-paced arcade offering that allowed you to dribble through an entire team before placing a fifty-yard shot past the keeper. It was a frankly inferior version of the sport.

Konami remembers its halcyon days well and in its latest offering, PES 2014, the company has sought to recapture its former glory by tweaking the gameplay and adding new teams for a more comprehensive package. But can it really dethrone EA’s Fifa? Buckle up. It’s Fifa 14 vs. PES 2014.

Fifa has always been the king of licensed teams and this year is no different. Fifa 14 features 33 licensed leagues, which amounts to more than 16 000 real-world players. Chances are if you’ve heard of a winger who plays for, oh let’s say, an obscure Colombian team, EA has too, and he’s already in the game.

In the face of the EA juggernaut Konami has traditionally been forced to cede ground, and the signs are worrying from the start. Fancy a match in the Barclay’s Premier League? You’ll have to make do with the make-believe “English League”. Is your favourite team Arsenal? Bad luck, the Gunners aren’t licensed (“North London”). The same goes for Chelsea (London FC) and Manchester City (Man Blue) and all the other teams in the league barring, strangely, Manchester United.

It’s not all bad though. Konami has included a slew of new teams from a host of leagues around the world, and though the teams within the “English League” don’t bear their correct title, the individual players are all correctly named and with an appropriate likeness too. Putting up with Man Blue vs. North London isn’t so difficult after all.

Pro Evolution Soccer also includes the Champions League, a feature which is heavily advertised in the game. And with good reason. Fifa doesn’t boast the official Champions League licence. A point to Konami then, but Fifa still wins overall.

Fifa 14 gets off to a good start with new and improved menus that seem inspired by the Xbox 360 dashboard. PES 2014 boasts customarily awful menus and during my first outing in the game it took me a good ten minutes to work out how to change the personnel in my starting 11 – about as much time as the ensuing match.

Still, get to grips with the menus and Pro Evolution kicks into gear on the pitch. PES 2014 is powered by a new engine named Fox (the same one used in Konami’s Metal Gear Solid 4) and it’s an excellent match. Make no mistake, this year’s Pro Evo plays a beautiful brand of football. While Fifa is brightly coloured, almost cartoon-like, PES employs a more low-light look – the upshot is that many of Fifa’s ugly warts are not exposed in the same way here, while in motion, PES 2014 looks a lot better than Fifa.

In fact, the way players animate and move the ball is so fluid, so kinetic, you simply have to experience PES 2014 in action to appreciate it. In comparison, Fifa looks somehow clunky and archaic, and the tech powering EA’s series is starting to show its age.

Which brings us to the most important category.

A football game needs to be fun, fluid, and an appropriate approximation of the real thing. In recent years, Fifa has been the go-to game in this regard. Not so this year.

By seeking to slow down the pace of the game and offer a more accurate representation of the sport, EA has ended up bogging down the midfield and making it an arduous slog to score a goal, rather than a real pleasure. Players can no longer turn on a dime, and seem to take an age to get the ball out of their feet. In past games, you could ping a pass to a winger and, with a modicum of skill, beat a defender with aplomb. In Fifa 14, however, defenders are more tenacious and endlessly harass and grapple your attacking players. It might be more realistic, but it’s also less fun, and EA has seemingly overstepped in the invisible line between accessibility and realism.

Indeed, each individual player now feels heavier and seems to require more touches of the ball to actually get anywhere. Don’t even think about sprinting either. Almost as soon as you’ve depressed the right trigger, the ball leaps from your attacking player’s foot, straight into the clutches of the opposition.

I appreciate what EA is trying to do here but I’m beginning to yearn for a return to the heady days of yesteryear where you were actually rewarded for a bombing run down the flank. Now a more cautious approach is favoured.

PEs 2014 gets the gameplay spot on, helped in part by the fact it all looks so good in action. Players by default will take their time on the ball, but sprinting (or “dashing” as it’s known in Konami’s title) actually serves to take you past opposition defenders (EA take note). The pitches themselves feel roomy and they give you room to breathe; the space to maneuver the ball. In general, there’s a greater sense of depth in PES 2014 – it’s certainly not a game you pick up and master in an instant, but the goals it eventually yields are more rewarding and more like the real thing too.

In the end, Fifa 14 feels like something of a misstep. EA has changed the feel of the gameplay, but that feels like a concession to the millions of gamers who are actually going to go out and buy this new edition, rather than a decision made for the betterment of the experience. PES 2014, however, feels refined, focused, and precise. It makes better use of the controller, giving you a wide array of options on the pitch. EA gives you plenty of buttons to master (and these are controls I’m well used to after six years with the franchise) but it’s made the mistake of bogging down the midfield, stripping the series of its customary flair.

Fifa used to be realistic but also fun. Now it feels constrained and timid.

It’s a matter of subjective opinion, of course, but PES 2014 is my preferred choice this year. Don’t let the awful menus get you down. Spend time with the game, get to grips with its intricacies, and you’re rewarded with a product that not only looks more realistic in action than Fifa, but is more fun to play too. 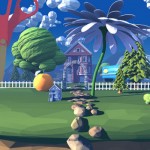