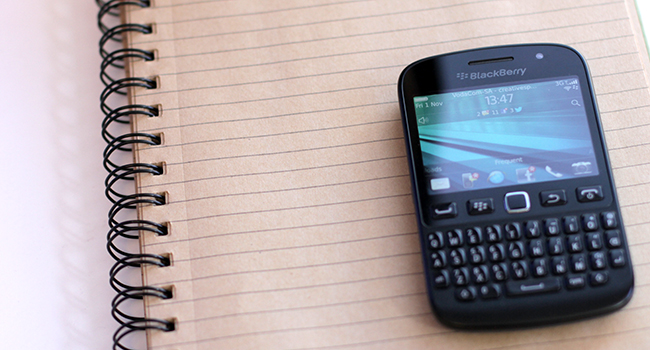 While both the Q5 and 9720 look the same to a layman (as opposed to BlackBerry fans), the 9720 sets you back R2 600 compared to the Q5’s ridiculous R5 000. The Q5 was slaughtered for being over-expensive and having a user interface that’s a bit all over the place. The 9720 is not much different. Instead, it got lower specs to target a more budget-friendly crowd and of course, OS 7. The latter characteristic seems to be the only thing that counts in its favour but when I considered its alternatives, it didn’t win my heart.

The 9720 carries 512MB internal memory and the same amount of RAM. Although the memory is poor, you can opt for up to 32GB as it carries a microSD card slot. Having 806MHz processing power won’t win anyone prizes in today’s day and age.

The 2.8” display carries 480×360 pixels and is fairly good quality. Pictures taken with its 5 MP camera are bright and colourful but generate too much noise in low light. There’s no front camera though so Skype or Google Hangouts are out of the question.

The keyboard is virtually the same as the one you’ll find on the Q5 — plastic QWERTY with the addition of a trackpad and also a capacitive touch screen. The three methods of control point out the phone’s inevitable identity crises. The UI feels all over the place to be frank.

I ended up using the trackpad most of the time as scrolling through my Twitter feed for instance is laggy and instead of scrolling down, it will accidentally open up a link.

The 1450mAh battery is nothing special and given the sub-3″ display and 806 MHz CPU, will last you about 24 hours. The 9720’s selling point is supposedly the fact that it’s built around BlackBerry Messenger with its dedicated physical shortcut key, and it’s also really cheap.

Same-old design
The 9720 looks cheap and tacky. It has a curved plastic build with a rifled “soft feeling” rear and the shiny BlackBerry logo both of which give you almost no grip whatsoever.

The Berry’s sides are lined with rubber and the volume control, pause/play and camera buttons are located on the right. Though these buttons might be tough, they also feel uncomfortably stiff.

On the left-hand side, the phone has a dedicated BBM button, so that’s kind of one bonus over the free cross-platform BBM app that was recently launched. Also on its right, there’s a microUSB port while the sleep button sits on top next to the headphone jack as usual. There are rubber buttons everywhere and it looks ugly as hell. 9720 vs. everything else
Performance-wise, BlackBerry World might have thousands of apps to choose from and some surprising ones like Plants vs. Zombies (which is not free by the way), but playing games feels awkward. This 3″ screen is terrible for games and you’ll be squinting as you wrestle with not only the small screen, but the controls as well. You end up not using the touchscreen as your finger easily covers more than 20% of the display and is too often clunky.

Browsing YouTube feels claustrophobic and the video quality is poor. I know those aren’t the areas BlackBerry’s are meant to excel at but what are? There are some cool software features such as Multi Share which gives you the option of sharing your photos via email, text message, BBM, or a handful of social media channels, but unique and usable features are few and far between. These are difficult times for those who own or want to purchase a BlackBerry. The 9720 comes right after BlackBerry’s Z10, Q10 and Q5 smartphone series which were all meant to be the company’s knights in shining armour. They were meant to stand up to, or at least remain current with, the trendy Android, iOS and Windows smartphone competitors. It’s new range of phones did so little to revive its fortunes that the company is left trying to raise funding. It’s sad but true.

So true, in fact that BlackBerry has decided to stick to emerging markets with the hope of the 9720 (and upcoming phones like it) digging it out of trouble. In a nutshell the 9720 is a budget device carrying the older, more matured BB 7 operating system with some above-average features — going back to basics. So why include touchscreen when it’s clearly not meant for such a small display?

Some could argue that the BlackBerry 9720 is a perfect match for those looking for something different from their current candy bar feature phones. If you’re a BBM diehard, love type keypads and you’re looking for a budget hardware companion, I’d say “Go ahead. The 9720 is your best bet.” But there are better budget smartphones out there for your money’s worth.

Verdict: If we’re to be frank and fair, simply look at the competition out there. The 9720 doesn’t stand a chance. The HTC First, Sony Xperia L or HTC Windows Phone 8S are all far better options for your cash. And if BBM is really your thing, then just download the app and let the 9720 rot. The 9720 is a below-average phone that if sold for R1000 (US$100) would almost be worth a purchase. 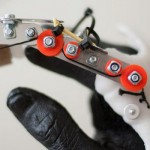