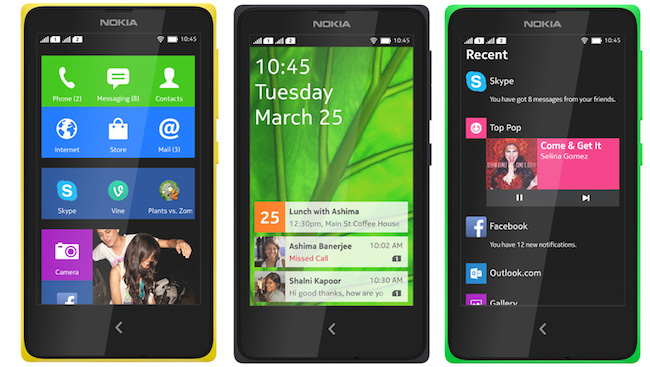 Here we go: Nokia’s first Android phone, times three. The Nokia X, X+ and XL. Ranging from pocket-friendly to mini-phablet, the phones are all affordable, have dual-SIM slots and can run Android apps. All phones (with the expectation of the X, which launches today) are coming Q2 2014 and cost next-to-nothing, for an Android phone.

All three phones launched at MWC moments ago. The Nokia X (€89) and X+ (€99) are one in the same, the X+ simply has more memory (4GB MicroSD card)) and RAM (786MB) “for those who want to enjoy even more music, photos and video”. Doesn’t everyone want that? The Nokia X is a 4-inch Android smartphone with dual-core 1Ghz CPU, 512MB RAM and a 3MP camera, it also has that nifty Lumia look to it, but this is an Android phone, with Windows Mobile being pushed into the foreground. The Lumia look means colours, such as  green, black, white, yellow, cyan and red.

The Nokia XL (€109) has a 5-inch screen, a 5MP camera (with LED flash) on the rear and a 2MP camera on the front “great for Skype video calls” says Nokia.

As for the interface… “The homescreen is tile-based, so it’s similar to a [Windows Phone-based] Lumia. It incorporates some elements of that — some limited live information into the tiles. We’ve also put in Nokia and Microsoft services.” says Nokia’s old CEO, Stephen Elop (via Techcrunch). Nokia also brings the Asha’s Fastlane service to the X range of phones, a “second homescreen if you like”. Or how we see it, a notification hub. The Nokia X is €89, Nokia X+ €99 and the Nokia XL €109 – this is an excellent price point for the cheap and hopefully powerful range of new Android smartphones from Nokia. All phones will hit Thailand, Vietnam, Russia, India, China and Indonesia. Or, countries where cheap Android phones are lusted after and perform well, sales-wise. For more Nokia X news in general, the companies official blog will see you right. 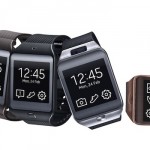