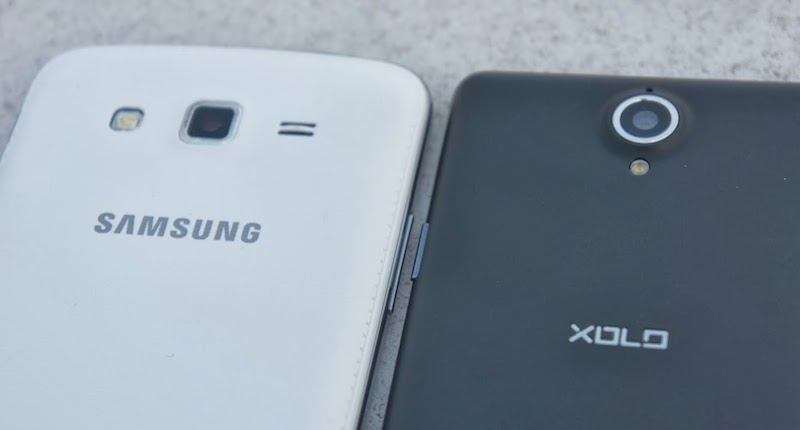 In the wake the launch of the ultra popular Motorola Moto G, there have been some great launches for the mid-range dual SIM market. Even smaller brands like Xolo have been targeting the Moto G since its official launch throughout the world. Samsung announced the Galaxy Grand 2, the successor to last year’s mid-range best seller, but held off its price disclosure till the Moto G was made available. Clearly, it was waiting for Motorola to reveal its hand in terms of pricing.

Xolo Mobiles has announced yet another addition to a great line-up of mid-range Android smartphones in the form of Q1100. Both these devices compete with the Motorola Moto G which we reviewed recently. Are they any better than the Moto G? Let’s dive into the details.

The Galaxy Grand 2 comes with a design very similar to Galaxy Note 3 with a faux stitched leather finish on the back and rounded corners. The back comes off and houses a removable battery, dual SIM card slots as well as a microSD card slot.

Samsung is still using a physical home button, neglecting Google’s design advice. The back and options capacitive buttons are quite close to the bottom edge of the device making it a bit too near to the palms while using the device. This leads to a huge number of accidental presses. Chrome lining around the sides will peel off over time but still, the Galaxy Grand 2 is one of the most well-designed devices in their smartphone line-up right now.

The Xolo Q1100 features a trivial all-black slab appearance. It has sharp edges and feels slightly uncomfortable to hold. The volume and power buttons sound overly tacky. The bottom housing the microUSB port is curvy. There’s a latch for removing the back cover but the experience is unsettling. The back cover feels like it will break anytime while removing it.

There are three capacitive buttons on the front: menu, search and back. But the menu button is actually labelled as a multitasking key, leading to confusion for first time users. It’s a blunder and this shows that less attention was paid while making this device and getting it out for sale. Samsung Galaxy Grand 2 obviously has a better design as well as build quality.

As opposed to the Moto G, where Motorola has prioritised screen quality against a relatively smallish 4.3 inch screen, Samsung and Xolo have targeted users who want a large screen. The Samsung Galaxy Grand 2 features a 5.25-inch TFT LCD screen with HD resolution and a pixel density of 280ppi.

The Xolo Q1100 has a slightly smaller but reasonable 5-inch IPS LCD display with near “Retina Display” screen sharpness at 294ppi. The screen on the Q1100 is sharper but can’t stand against the screen used in the Grand 2 in terms of brightness, black levels or contrast ratio. Even though it uses an OGS (One Glass Solution) panel, which reduces the air gap between the display, touchscreen digitiser and the protective layer, the Xolo Q1100 screen is way more reflective in comparison. The Samsung Galaxy Grand 2 definitely has a better screen. Both offer accurate multitouch finger tracking.

Both the devices are powered by the same chipset: Qualcomm Snapdragon 400, which uses a combination of 4 stock ARM Cortex A7 cores along with Adreno 305 GPU. But the one on the Xolo Q1100 is clocked higher, at 1.4GHz as opposed to 1.2GHz on the Grand 2. The Xolo Q1100 has 1GB RAM while the Grand 2 has larger 1.5GB RAM. In spite of this, the Xolo Q1100 performs better in day-to-day usage. Its UI is definitely snappier than the Grand 2.

Samsung has reduced the amount of bloatware as compared to high-end devices from last year but still, its performance degrades over time. I experienced smooth performance till three days of using the Grand 2, after which it started slowing down. The UI would freeze multiple times and it took 2-3 seconds to open an app after clicking the app icon. Both the devices come with Android 4.3 JellyBean pre-installed.

The Xolo Q1100 offers a UI that is close to stock Android but with some custom designed icons. Galaxy Grand 2 comes with Samsung’s TouchWiz Nature UX, which offers great software features such as a music and video player, complete with equaliser, surround sound options, subtitles and wide range of file format support, etc. There’s Multi-Windows mode which makes using two applications at once possible.

Easy mode is useful for new smartphone users or the elderly due to its simple layout, larger fonts and limited functionality. “One Handed Operation” shifts some important aspects such as dialler, keyboard and lock screen pattern UI closer to the fingers. Some of these features are real handy but it would have been better if the UI was consistently swift. In terms of day-to-day UI speediness, Xolo Q1100 wins the race. The Xolo Q1100 and Grand 2 come with an 8MP AF camera with LED flash. Both can record full HD videos as well but the Grand 2 can record it at smoother 30fps while the Q1100 can do that at half the frame rate; 15 fps. Samsung is relatively faster in snapping images. It even has a 16:9 camera sensor so you can get full resolution widescreen images. Images come out clearly and richly detailed. There is some compression noise but one can live with it. Videos and images can be captured simultaneously. Even the front-facing 1.9 MP fixed-focus camera is capable of taking clear images and 720p videos.

Xolo uses a 4:3 camera sensor whose shot-to-shot time is slower than Galaxy Grand 2. Xolo Q1100 tends to mess up white balance in outdoor situations. The images also look over-sharpened. Even though the Xolo Q1100 records FHD video in 15 fps, it uses more bitrate than the Galaxy Grand 2, resulting in larger file sizes for jerkier videos. The following are details about videos recorded by both the devices.

Panorama and HDR are present on both. But the Galaxy Grand 2 offers a lot of camera mode options which we saw from the Galaxy S3 such as Beauty Face, Sound Shot, Best Face, Sports, Night Mode and Continuous Shot. There are various real-time effects such as well.

The Xolo Q1100 also has a weird interface, which breaks down settings in two different tabs while there is no reason they should be. Xolo should learn not to confuse people with details. Overall, the Galaxy Grand 2 does a commendable job in camera performance as well as usability. It is fast in shooting and offers some great camera features without confusing users.

Both the devices have dual SIM card slots — this is what’s necessary for a mid-range smartphone in India to succeed. Grand 2 can access 3G in both the SIM card slots while Xolo Q1100 can do that in the primary SIM slot while the secondary SIM can only access 2G networks.

The Galaxy Grand 2 includes dual-band Wi-Fi b/g/n, Wi-Fi Direct and DLNA. The Xolo Q1100 however uses single-band Wi-Fi b/g/n and it lacks DLNA. The 2600mAh battery helps to keep the Galaxy Grand 2 alive slightly longer than the Xolo Q1100, which is using a 2000mAh battery. But there’s not much difference in their battery endurance in daily usage. 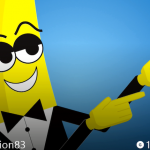