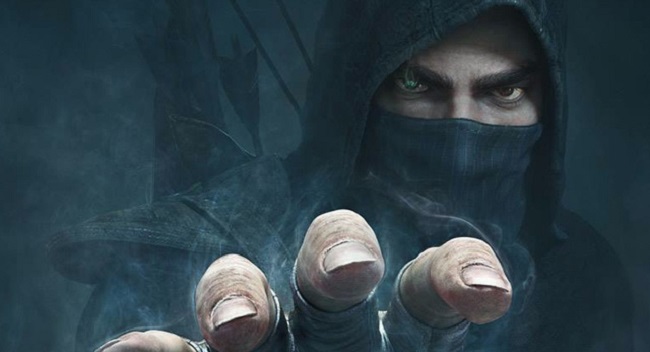 When the original Thief arrived on PCs in 1998, it was something of a revelation. Understated yet involved, quiet yet resonant, you were Garrett the master thief. The world you explored was oozing in atmosphere and informed by rich mythology. You had water arrows to extinguish flickering candlelight from afar, moss arrows to quieten your step and a sword lest you came face to face with a guard. It was simply made, but beautifully conceived, and the onus was on you to find the right path and execute your plan.

Yet two sequels later, both Looking Glass and the franchise that made it famous were dead, Garrett seemingly buried beneath the rubble of a franchise that had been uprooted at its very foundations by men in suits demanding a fatter paycheck.

The prodigal thief is back, however, thanks to Eidos Montreal, who seems to be forging a reputation for tackling tricky reboots. Much has changed since Garrett was last on screen. The demands on developers to deliver graphically beautiful games is mounting all the time, yet more than that, the mechanics are changing too. Today we like to have our hand held. We want instant thrills. Subtlety and restraint are less important.

The problem, of course, is that Thief was always a game of subtlety, and while the dark city is easy enough to recreate (and is faithfully recreated here in glorious high-definition), capturing the soul of the original is trickier.

And so it proves to be the case. Dig beneath the window dressing and you realize that the Thief of 2014 is missing something. Garrett, and the game he stars in, is suffering from an identity crisis.

Familiar, but not a friend

The story begins with a tutorial mission introducing you to a vixen from Garrett’s past. She’s the rambunctious type who, as luck would have it, is drawn to trouble. That’s a useful gambit for propelling the story along, but rather annoying for our anti-hero who is forced to save her.

The story reads like something from the well-worn pages of a schlocky B-grade book; picture one of those Pan novels with the garish title and weathered font. Thief has aped the motifs from various literary and filmic sources (as well as the original Thief of course), but it turns out to be a dish of reheated ideas. There are the usual forks, the conventional characters (a mystic here, a baron there) and a pervading sense that you’ve been here before.

True, this is a reboot, so there’s nothing wrong with a sense of familiarity, but Thief is never more than the sum of its parts. It’s orchestrated by a tale that’s content to be serviceable and safe, but never interesting.

That criticism unfortunately extends to the game itself. This new adventure takes place within The City, a world of baroque styling lit by flickering candelight and patrolled by guards falling foul of a devious plague. But where is it supposed to be set? If only I knew. In your travels, you’ll come across townsfolk that have seemingly converged from Europe, America, even Australia. Perhaps this is a globalised city of the future, and one that has fallen prey to the excesses of the 21st century, reduced now to a crumbling facsimile of the Stone Age. Who knows? The developers don’t, and The City winds up lacking a sense of place.

At least Garrett is a decent sleuth. He can dash quietly from one hiding spot to another or sneak a look around walls and there’s even the opportunity of spying through keyholes and accessing cutscenes you might otherwise have missed. The latter is a particularly neat touch.

The game also handles well, with Garrett’s itchy fingers front and centre all the while. Drop down to pick up a coin and the camera will follow our hero’s hands. It lends the game a nice immersive touch.

The sound design in places is excellent too, and I particularly like the music that plays in the background as you navigate the main menu. The City also looks pretty, in a rundown, gothic sort of way. Technology has improved drastically in the last decade, and Eidos is keen to prove that here.

The problem is, The City is no fun to explore. The game very much follows the New School of Design that necessitates you either funnel the player down narrow corridors or set up a level with myriad ways to explore it. The result is that when you reach an open area it’s so blatant what the developers are up to that you never feel a sense of achievement in actually finding an alternate route. Plus, you can simply toggle a “Focus” mode to point out all the important bits to you anyway.

Dishonoured showed us how it should be done, and in many ways doomed Thief to ignominy. Both games are roughly cut from the same cloth, yet they couldn’t be any different either. In Dishonoured, you’re empowered to explore a meticulously crafted world that adapts to your decisions. In Thief, there is no real freedom, only a series of smokes and mirrors. It feels at times as if you’re running down the clock on a dev. kit designed by developers for developers. “Oh, look here,” the game shouts, “this is a great way of using a vent as a sneaky side path. Hey, developers, this is a neat trick! Oh, and it ticks the box of ‘non-linearity’ too!”

Thief could have been a game of scope and ambition, but instead, it never gets going. You soon realize the levels are actually small self-contained areas broken up by load screens. The load screens stack up, as does your impatience.

Indeed, it’s easy to find flaws with Thief because there are just so many of them. I could lament the poor dialogue between NPC characters which verges on laughable at times. I could pick apart the AI, which is often dim-witted, and sometimes superhuman smart. If I was feeling particularly churlish, I could even bemoan the fact that, like Bioshock: Infinite, there’s the inexorable and irritating urge to spend most of your time with your nose to the floor, aimlessly looking for petty loot.

Garrett might be a thief, yes, but I can think of better ways of spending my time.

Nutshell: Thief looks good and it’s a half-decent recreation of the old game – but nothing more. Thanks to an extended stint in development, Thief is never quite sure what it is. It ends up trying to play it safe by catering to everyone, but in the end, diehard fans and newcomers alike will be disappointed.

Thief is single-player only, and was reviewed on an Xbox 360.