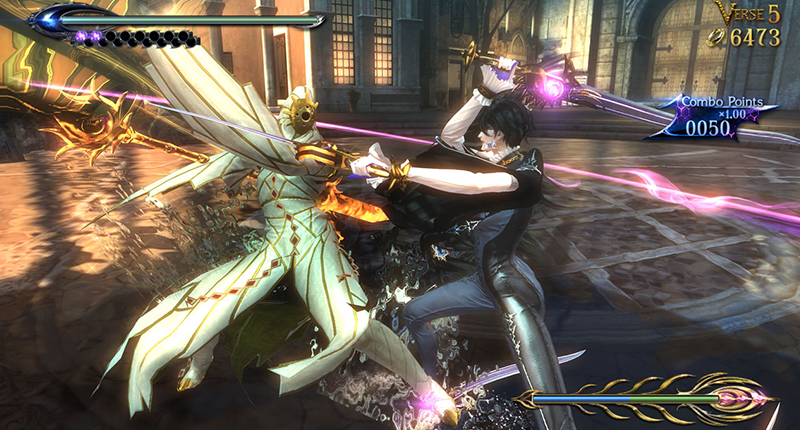 I have a special relationship with Bayonetta. Not in the creepy stalker way (I promise), but I’m rather attached to the character who is a kick-ass, near-invulnerable death machine with the moves of a sadistic ballet dancer. Bayonetta 1 was one of the most fun, bombastic games for the Xbox 360 and because Bayonetta 2 lands exclusively on the Wii U — a strange choice of platform indeed — many of us won’t be experiencing this mad-combo witches adventure. But I did, and it’s still as excellent, oddball and maniac as the original.

I must admit, I haven’t played much Wii U but the tablet controller is excellent for Bayonetta 2 and feels as responsive as the Xbox 360 controller did. The action is mirrored on the tiny tablet’s window and Nintendo assured me that the entire game can be played that way with touch controls, it’s just not preferable to a large screen. The demo began with a typical nonsensical bit of fluff, with Bayonetta strutting around in tight leathers (her suit is made of her hair, actually) as she muttered about demons. But we’re not here for the story, we’re here for a refined Devil May Cry-style adventure.

I had a blast
Controls are as easy as it gets, with X and A for fighting, B for jumping and a pull of the right trigger to dodge and activate Witch time. The left trigger selects a new weapon and… that’s really all there is to it. Bayonetta 2 is good, simple fun but as the game progresses a slew of combo’s unlock for the player and combo’s become unique, flowing and above all, intuitive. Holding down either of the attack buttons activates a quick combo, and dodging at the right moment unlocks a bullet-time mode called “Witch Time”. Bayonetta can also, weirdly, torture her foes at the end of a combo by pressing both attack buttons. This launched (in the case of the demo) a gruelling machine which rolled over my angelic foes with large spikes. Bayonetta’s enemies are angels, evil angels naturally for the sake of the irrational.

As I’ve played the previous Bayonetta, I had no issues with the difficulty, which I found to be a cakewalk. Dodging attacks is simple, and massacring enemies is pure delight but perhaps Nintendo had the difficulty set low. I should have asked. But the difficulty isn’t the draw, the roller-coaster ride of graphics and sound is. Bayonetta 2 is a visual treat, with glitter, smooth animation and tight controls drawing the player into a rather unique, if not draining experience (there’s only so many times I can air-combo the same enemy).

What’s new to Bayonetta 2 is an online co-op mode and the Umbran Climax, which when activated with a trigger button, smashes out a deadly series of attacks. It also makes the game markedly easier. After beating up ten or so angels with my hair and spiky shoes, it was boss time. It took place on a train and it was a matter of avoiding its tail, climbing aboard its back and knocking its face in. The camera spun around like an epileptic toy-poodle during the fight, so hopefully Nintendo addresses the camera issues before launch. Defeating the boss led me onto yet another gargantuan beast which, after depleting its first life bar, kicked in the second stage of the fight which took me to the air. A few dodges, some use of Witch Time and a slew of special attacks later saw the beast dead.

Bayonetta 2 retains the charm of the original without impacting on the gameplay, and mixes it up with co-op and — dare I say it — controls that were tighter than the Xbox 360’s gamepad. It release October 2014 exclusively for the Wii U which again, is a damn shame. I can imagine that the incredible graphics would be far better suited to the PS4 or Xbox One. Regardless, this is a game pure and simple, with a Japanese flair for imagination and fun with a capital “phhh”. Also, Bayonetta trendy hairdo should please the hipster witch-loving demographic. 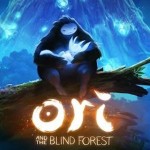