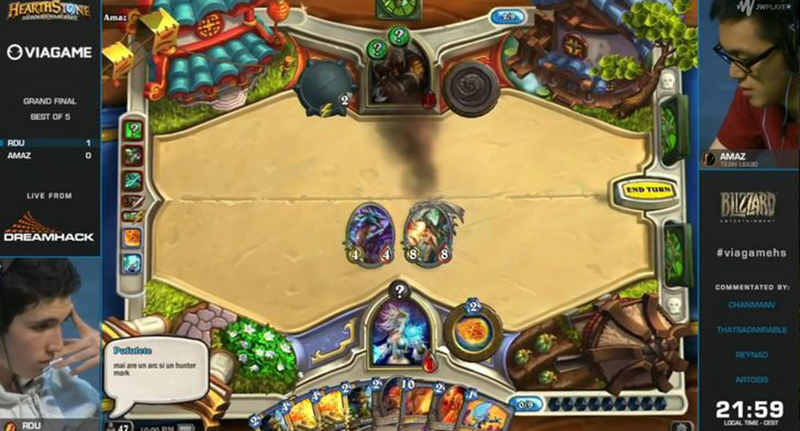 Blizzard’s mobile collectible card game, Hearthstone, has proven a wildly popular game, to the point that there are competitions where the prize money can be as much as US$10 000.

One such tournament, hosted by DreamHack, ended yesterday, but the winner Radu ‘RDU’ Dima has come under a cloud judgement due to some dubious messages he received from friends during the finals.

Here is the full match

The final score was 3-0, but during the second game Dima received messages from his friends on his Battle.net account.

Pufulete: “Has a bow and a Hunter’s Mark.”

After that match finished, Dima informed the officials of the messages, and both players’ friends lists were cleared before the third match. At the end of the finals the officials reviewed the footage concluding that the messages would not have changed the course of the match — Dima was thus crowned the winner.

Subsequently though, viewers have reviewed earlier footage of the finals, finding two similar messages on Dima’s account. These messages though do not overtly give out match-compromising information, but viewers believe they might be coded — alluding to what cards Amaz had drawn.

Interestingly, Amaz himself spoke out in support of Dima. In a YouTube video he shot straight after the match back in his hotel room, he defended Dima saying that “friends get crazy and they make bad mistakes and what-not.” Although he did urge Blizzard to make a tournament mode that disabled chat.

DreamHack’s officials have yet to comment on the tournament’s incident.