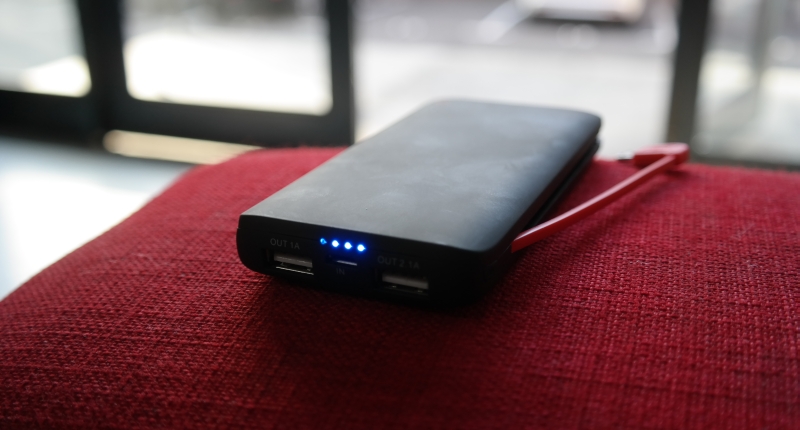 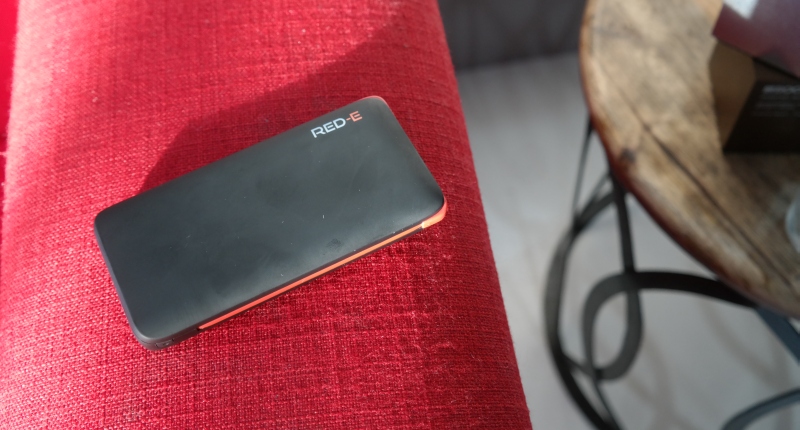 While smartphones and other mobile devices have been growing in speed and utility in the past decade, their overtaxed batteries often struggle to keep up. Even though new platforms like Android L and iOS 8 aim to manage battery life more effectively, there’s only so long a single charge can last on a battery. Thankfully, there are external power packs to save us from that dreaded “low power” warning.

The Red-E is the latest contender in a saturated external power pack market, yet it’s R565 pricetag is one of the best seen for it’s 6 000 mAh capacity.

Although it may look like yet another battery pack, the Red-E possesses a certain degree of personality (perhaps thanks in part to the double pun in its name). The compact red and black rubberised pack mirrors the form factor and size of the average 4″ smartphone while around double the weight of one. The plush carrying bag is a nice touch, and keeps all necessary connections together. 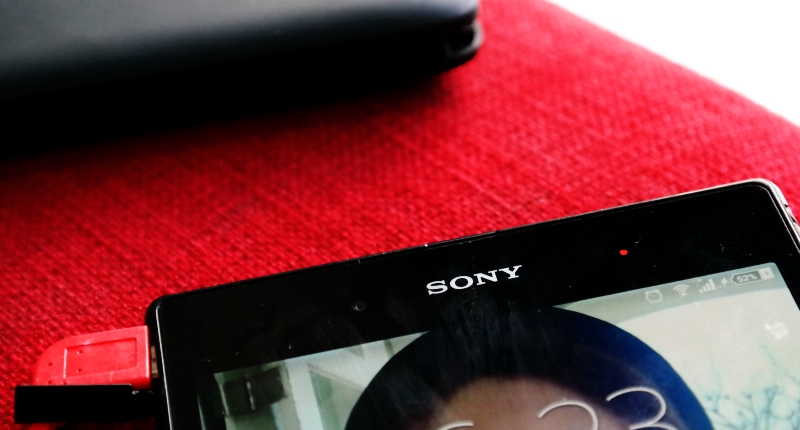 The Red-E’s design is well thought through. Two ingeniously-placed cords are tucked away along the device’s sides, housing USB and microUSB connectors respectively. These allow the Red-E to charge itself or other external devices, negating the need for a designated cord. Other connections are offered, including a 2mm Nokia pin, a miniUSB connector and both 8-pin and 30-pin Apple connectors.

However, If this array leaves more to be desired, there are two additional USB output ports spitting out 2.1A and 1A respectively, and allows for simultaneous charges of up to three devices. As a nice touch, the Red-E graciously switches itself off when charging is complete. Four blue LED’s above the microUSB outlet also signals when Red-E is charging, how much power is left or whether the Red-E is actually on. It’s a welcome inclusion.

The design is conservative but it’s the performance that’s the real deal swinger. My 2 000mAh smartphone battery was charged in a rather swift four hours on the 1A outlet, while the Red-E itself charged within six hours from the wall (a little longer via my laptop’s USB). The device, while topping up my phone’s battery now and then, lasted one very-long week. According to the manufacturer, users can expect 3.8 charges for an iPhone 5s, a more-than-sufficient 5.1 charges for a GoPro 3+ or just under a full charge for a Samsung Galaxy Tab 3. It’s more than adequate for the tech-mad road warrior or office adventurer. 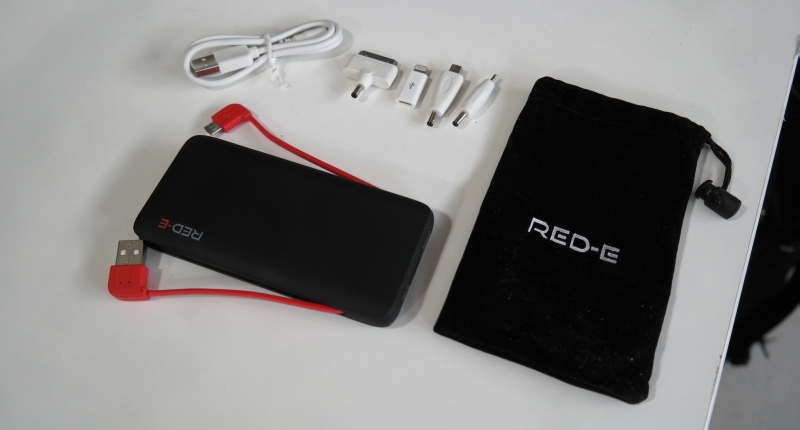 There has been no sign of self-discharge from the device either, an issue that normally plagues power packs. Red-E’s manufacturers claim consumers will get up to 500 charges before the pack shows signs of fatigue, while the device itself has a lifetime guarantee (this annoyingly excludes “normal wear and tear through regular use.”) Green warriors will be happy to know that the lithium-polymer internals are environmentally friendly and fully recyclable while containing no harmful substances.

Frankly, there really isn’t that much wrong with the Red-E. Issues arise only when one focuses solely on its flaws. The rubberised finish, although making Red-E pleasant to the touch and difficult to accidentally knock off a desk, does tend to hold oily fingerprints and stubborn dirt. A cleaning cloth definitely wouldn’t have gone amiss even though the plush bag can be used as a buff.

Furthermore, the LEDs were not at all honest when it really mattered, claiming that the Red-E was half charged when it, and my phone, were near empty. Annoyingly, there is also no indication when the battery is indeed flat, other than the complete lack of LEDs after mashing the power button a few times.

Connection-wise, the 30-pin Apple connector was as temperamental as the LEDs, charging older iDevices only when it felt obliged to do so. Of course, if one is really stuck, there’s always Apple’s proprietary cable, but this really shouldn’t be an excuse.

Although there are other options on the market and this device is not without fault, the Red-E feels and behaves more consistently than most batteries of its size. Constant use — at least once a day for a week — has shown no visible wear or tear on the aesthetics or the battery’s internals itself. I’ve used it to charge my phone exclusively recently, and the phone itself shows no unhappiness either.

While smarter devices see no noticeable improvements on the battery front, power packs will always seem to have a place in this world. The Red-E is a good choice if it’s large capacity and reliability you’re looking for, in a package no bigger than an iPhone.

Verdict: An attractive design and abundance of connectivity options leaves users with a compact and versatile means of additional power. The 6 000mAh capacity ensures users can charge up to three devices at a time, or a single smartphone more than once for up to a week. Although the 30-pin Apple connector and LED indicators were a bit uncouth, the Red-E as a power pack, performs admirably when needed the most — just as your battery’s about to die. 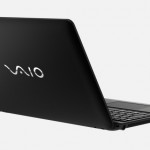