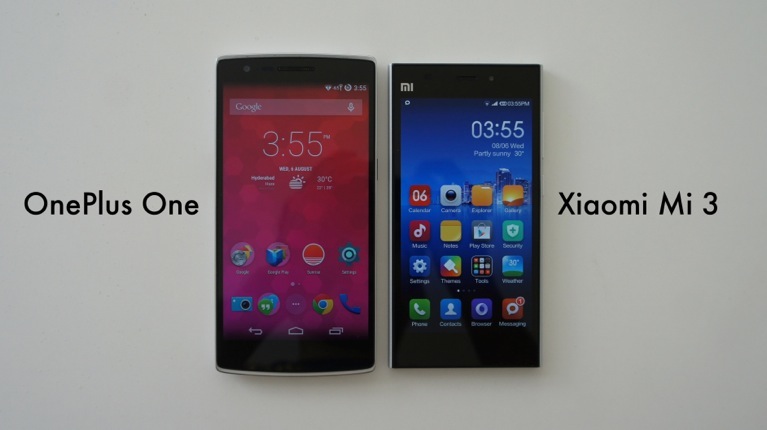 Chinese smartphone brands like Xiaomi and OnePlus are giving a hard time to well-known international brands like Samsung, LG and Sony by pushing out some really great smartphones at half the cost. We’ve managed to source two such smartphones: OnePlus One and Xiaomi Mi 3 for a detailed performance comparison. Both the devices come with a groundbreaking price tag. Let’s see which one is capable of providing you with the best performance.

The One is a really large and heavy device but OnePlus made sure to make it as ergonomic as possible using a curved back and thin bezels. The chrome strip around the display and an option of seven different replaceable “StyleSwap” back panels (including sandstone material, just like the Moto X  make the device look elegant yet attractive, if not flashy.  The good thing about StyleSwap back panels is that you can change them according to your liking. The Mi 3 has a completely flat back and rounded sides. Even with a smaller 5″ screen, the Mi 3 is physically as big as the One due to its large bezels. But it is lighter than the One, making it easier to hold and operate. The OnePlus One definitely looks more premium when compared to the Mi 3 but at the same time, it’s hard to operate.

Winner: OnePlus One has a better and stronger build but the Xiaomi Mi 3 is relatively comfortable to hold.

Both the devices feature full HD LCD screens, though the One uses a new 5.5″ LTPS display panel with TOL feature which supposedly reduces the gap between the display and the digitiser and at the same time, is three times more durable than other regular display panels. The Xiaomi Mi 3 uses a regular IPS LCD display panel with Gorilla Glass 3 protection. In real-life usage, the One has a better display but due to its reflective surface, it becomes slightly hard to use when outdoors. Overall, you will be satisfied with both the displays but the Xiaomi Mi 3 has a better display when it comes to sunlight legibility.

As per the specifications sheet, both the devices feature the same 13MP camera from Sony with dual LED flash. But, they actually don’t use the same sensor. The Mi 3 uses an IMX 135 camera sensor with a 5-element autofocus lens. The One uses a newer generation IMX 214 camera sensor with 6-element lens, which is also used in the LG G3 and the Oppo Find 7. The One can record 4K videos but if you don’t have a 4K screen, there’s no actual advantage in recording videos in 4K. In fact, the OnePlus One is the first smartphone in the world which can record true 4K DCI (4096 x 2160 pixels) resolution at 24fps. The Mi 3 is limited to recording 1080p videos though. The actual image quality is quite similar on both the devices. Images have a lot of detail and the post processing is very good. The images shot with the Mi 3 have slightly punchier colours but the ones shot using OnePlus One are actually closer to reality. Videos shot using the OnePlus One have more detail and dynamic range. Both of them offer slow motion videos at 720p resolution.

With a 2.5GHz Qualcomm Snapdragon 801 and 3GB RAM, the One is slightly faster than the Mi 3 which comes equipped with a 2.3GHz Qualcomm Snapdragon 800 SoC and 2GB RAM. Due to extra memory, the OnePlus One always had a gig of free RAM, even under heavy use. The Mi 3 however can experience stutters sometimes and it had less free RAM to play with, thanks to heavy customisations and apps which are preloaded with the device. Gaming performance was flawless in both the devices with no lag whatsoever. However, they did get warm while playing graphically intensive games. The dual loudspeakers on the One were much louder and clearer than the mono speaker used on the Mi 3. The audio through headphones was louder and more satisfying from the One as compared to the Mi 3. Also, I found that the dual speakers on the OnePlus One weren’t stereo. Call quality was equally good on both the devices.

Winner: There isn’t much difference between their processing performance but the OnePlus One feels slightly more fluid than the Mi 3.

The OnePlus One comes preloaded with CM11S, which is why it became an instant hit with tech enthusiasts. CM11S or CyanogenMod 11S is a custom version of Android that comes with insane amounts of customisation options, be it performance or UI related. Hundreds of CM11 compatible themes can be downloaded from the Google Play Store. You can learn more about extra features of CM11 in my OnePlus One review. Xiaomi has a solid theming engine and a lot of free. as well as paid themes. It comes with some of the most wanted features such as call recorder, power saving mode, customisable quick setting toggles under the notifications bar and a guest mode which hides personal data from the device. But MIUI v5.0 with skeuomorphic UI elements looks too old when compared to flat, sharp and refreshing UI elements used in the recently released devices such as OnePlus One and the LG G3  It’s time Xiaomi switches to the new MIUI v6.0, which as Hugo Barra promised, will be based on Android L’s Material design.

Winner: MIUI v5.0 looks old when compared to sharp and flat design of the CM11S.

The One comes equipped with all the connectivity features that you could think of except an IR blaster and DLNA. It comes with penta-band 4G LTE, dual-band gigabit Wi-Fi, Wi-Fi Direct, Wi-Fi Hotspot, Miracast screen mirroring, Bluetooth v4.1 + LE, NFC, GLONASS A-GPS, microUSB v2.0, USB OTG, USB Host, MHL and a 3.5 mm headphone jack. Even the Mi 3 comes with all these features except 4G LTE connectivity. Instead, it is equipped with 42Mbps HSDPA 3G. Additionally, it is also equipped with DLNA for wireless multimedia file sharing over the network. Winner: Both last a day of heavy usage. Tie.

Verdict: The OnePlus One is available for US$299 and US$349 for 16GB and 64GB storage variants respectively. The Xiaomi Mi is priced at US$289 and US$375 for 16GB and 64GB respectively. In fact, the 16GB version of Xiaomi Mi 3 is priced at INR 13,999 (±US$230) in India  which is cheaper than its price in China. Both the devices are truly remarkable, given their price tag but buying a OnePlus One is quite a task as it is available to only a few people who have invitation to buy it. If you manage to get an invite, I would advise you to buy the OnePlus One.

Winner: If you can manage to get an invite for the OnePlus One, buy it without any hesitation. 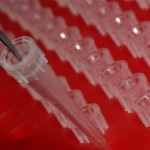