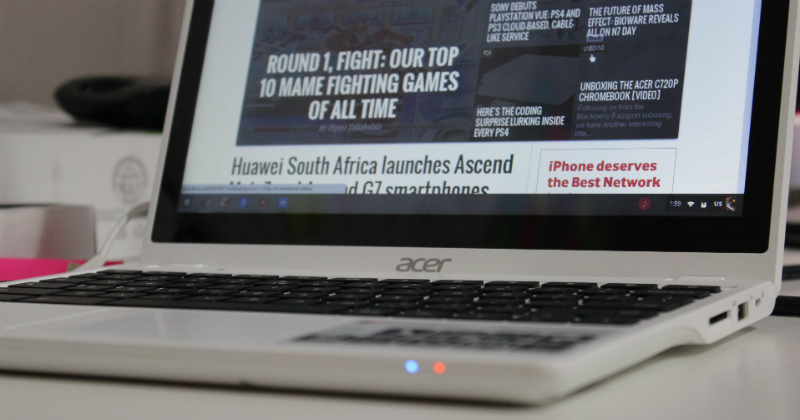 Besides my trusty toaster, the Acer C720P Chromebook has been one of the most practical things I’ve used to date. To be fair, it’s also the very first Chromebook I’ve come across. Either way, it’s managed to convince me that internet-based devices are the way of the future. What a lasting impression it’s made.

While the design doesn’t really resemble anything of a Macbook Air or a Lenovo Thinkpad, that stops being much of a problem when you start to enjoy its practicality and ease of use. Then again, the low-cost Chrome OS notebook isn’t meant to be a graphic-intensive, gaming machine at all.

The C720P is the best of two things: a low-cost notebook by Acer and Google’s attempt at crafting the perfect ease-of-use operating system.

The C720P comes in both black and white models. I got the white.

The 11.6″ multi-touch HD Chromebook has a full plastic body that feels sturdy for the most part. It’s a decent 1.3kg and presents a slight bulk in figure but doesn’t look ugly at all.

The signature colourful Chrome logo at the top gives it an edge and lets every passer-by know exactly what you’re using. The soft edges and the comfortable handling when opening up the ‘book screams friendly.

On the left-hand side of the machine, you’ll find an HDMI, a USB 3.0 port, a headphone jack as well as the power input. On the right there are an SD card reader, a USB 2.0 slot and a Kensington lock slot.

Given its small size and weight, it’s easy to carry around in a backpack or even a large handbag. The keyboard is sexy. While the board is a bit small, the dark grey keys have the look and feel similar to a Macbook Air. Compared to a Windows computer, the caps lock key has been replaced by a search option which directs you to all your apps and Google search history, and comes in very handy.

Other shortcut keys are the Back and Forward webpage navigation, Refresh, Full Screen, Brightness and Volume control, and Power. I have to admit that with these keys at hand, it was the first time I actually made use of all the shortcut keys on a keyboard.

The typing experience is comfortable, though I’d prefer the keyboard to be slightly larger. As a journalist, I type a ridiculous number of characters every day. My hands are slightly larger than average, and although I really enjoy the feel of the keys, I’d still prefer a keyboard that’s a bit more spacious. There are one or two shortfalls that should be pointed out. The plastic surrounding the keyboard and the touchpad is rather clunky and feels like it could snap if too much pressure is applied.

While the 1366×768 screen quality is more than adequate, certain fonts occasionally seem a bit weathered, for a lack of a better word — not crisp and clear. Videos, on the other hand, are all very impressive in such a way that I wouldn’t ask for anything more on a 11″ screen.

For such a humble machine, the Chromebook is extremely responsive. The machine took around two seconds to recognise and load photos on an SD card, something a Windows machine can only dream of accomplishing. Though it has a 32GB SSD hard drive complemented by the 4GB RAM tucked away, most things from the background to the computer settings are all set in the cloud. It also carries an Intel Celeron 2955U Dual-core 1.40 GHz, which buzzes the machine along nicely.

Apart from the initial sandpaper-like feel to it (which was quite weird on first touch), the touchpad has some nice features including both horizontal and vertical scrolling with the ability to swipe away pages or switch between applications.

Initially, looking at the design I had to remind myself time and time again that this is a R4600 (US$330) device, and that I should cut it some slack. When it came to the ‘book’s user experience and speed however, I was reminded by what a real bargain the C720P actually is. Upon booting up your little C720P for the first time, it welcomes you with a Chrome Introduction step-by-step guide taking you through the basics of the system — from accessing the apps and settings to personalizing the system and redeeming your free Google Drive storage.

I took the C720P on a trip for a view days, and boy, did it serve me well. The 3950 mAh battery lasts over 7.5 hours on one charge while using WiFi, listening to music, playing videos, surfing the web and working in Google Docs. They all seem to just nibble at the battery’s life. I often forgot to plug it in at work and had to remind myself after lunch that it actually came with a matching white three-point charger.

One of the biggest reasons people tend to shy away from Chromebooks is the fact that they’re internet-only devices and, in effect, limited by this. I didn’t find this to be a problem at all. The device is fully functional without the internet, but you won’t be able to save anything to the cloud, of course. Besides the limitations in the gaming arena, I loved using Google Drive for all my images and documents. I used Pixlr to edit my images, Google Docs to write and Gmail for mail and, well, you get the hang of it. “There’s an app for that” doesn’t only apply to iOS devices anymore.

I did have trouble playing back video files from my Nikon camera’s SD card which was just annoying to say the least.

Because the friendly machine relies on Chrome OS, there are no real updates or heavy downloads needed. The variety of apps available — from photo editing to note and audio recording — is easily at hand with the Chrome Web Store. Everything happens online, which has prompted Google to also throw in a decent 100GB of free cloud storage and for those living in the US, UK and a handful of other countries, as well as a 60-day free trial with Google Play Music All Access.

Throughout my web experience — which included having more than eight tabs of substance like Tweetdeck, Facebook, Soundcloud or YouTube — I never once felt a lag or a stutter. Browsing is also incredibly fun when you leverage the touch screen.

That touch screen is an enjoyable addition overall and I often found myself reaching out to the bottom corners for quick access to the apps in the left-hand side and the setting tab on the right. Turning up volume also seems more natural on touch.

Verdict: I loved reviewing this device and, given the fact that it’s under R5 000, I wouldn’t hesitate to purchase it as a decent traveling companion. As a writer, it definitely struck a chord with me. The plastic design is comfortable but presents a couple of annoying flaws, but then again, it’s a low-cost device. I quickly got to grips with Chrome OS and its variety of apps which essentially fulfilled my every need. Moreover, it’s fast and responsive as hell. So this is a big thumbs-up from me to Acer and Google! 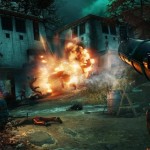