More
Home
Subscribe
Skip
Continue in 10 seconds
Skip
By Nur Bremmen: Staff reporter
Read nextBlackBerry offers up to $550 off when trading in iPhone for Passport

Consoles have come along way in terms of graphics and power consumption since the days of Alex Kidd and company, so naturally, these machines have grown in size. But we’re pretty sure that no one would’ve predicted how big the Xbox One would grow to be.

Carl Ledbetter, chief of the Xbox One‘s design squad has responded to criticisms of the size of the console, in an interview with MCV.

It seems that Microsoft didn’t want the same issue with its previous console, that would often overheat and commit suicide at the most inconvenient moments.

“Everybody gets frustrated,” explains Ledbetter, “because what we want is for everything to be wafer thin, not get hot and just be a snap to put together. But the reality is that there are very real issues around cooling when you’re pushing some number of watts in the processor, therefore the thing has to have some size to it.”

He makes a valid point, some thing that is especially true to other devices like smartphones.

Often modern hardware focuses on form rather than function, something Microsoft knows all too well in both the console and software spheres. For the Xbox One, it took a different approach.

“It’s called designing with constraints, and constraints create very real things for people to go after and solve. Blue sky can get a little tough because it is limitless and it’s boundless,” he adds.

Sony’s PS4 is much smaller than the console, while the Wii U, well, it’s virtually microscopic in stature. But for a gamer, it’s all about performance.

“For us, it is about creating a very consistent and seamless experience that is reliable,” Ledbetter added.

Going into the holiday period, the Xbox One has seen a rapid growth of sales in the last few weeks, mainly thanks to Microsoft’s price slash, but the console still lags behind its older brother’s sale’s records and, more importantly, the PS4’s. 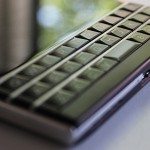