Today the gaming industry is the strongest it has ever been. The public’s interest in this interactive phenomenon and the rapid advancement of game design technology has resulted in it becoming one of the highest grossing industries in the world. But this in turn, with an abundance of indie developers seeking their glory and established studios trying to create the next hit, has lead to an influx of titles flooding the market.

Because of this over abundance it is easy to miss out on some games and one is not always certain which titles to approach or rather leave in the past. So we here at Gearburn have decided to dive into some of the games we have overlooked in recent months to assure that our readers have a firm comprehension of what is swimming around in the sea of games. Better late than never, right?

So here are some titles that we feel deserve your attention. Like them or not? It’s up to you… “There will be a significant difference in what Phantom Pain brings to the series, so we want to ease the players into the new open world environment and its potential. As such Ground Zeroes has been designed to introduce key elements,” he concludes.

Ground Zeroes, like both its predecessors and successor, is a tactical third-person stealth game that focuses more on operating from the shadows than front-of-the-line combat (much in the vein of Splinter Cell). That’s not to say that raining bullets is not a possibility but it will have to be dealt with carefully as you will be dealing with a large number of enemies at any given moment. Luckily your arsenal consists of silenced weapons, but also remember that your sound suppressor is only limited to a number of shots.

Ground Zeroes puts you back into the shoes of the legendary Venom Snake (a.k.a. Big Boss) and once again sends you on a series of strategic stealth mission, signalling the start of the new theme of “Tactical Espionage Operations” that will be continued in Phantom Pain. Unfortunately all these missions will only take place at one level, a reasonably large coastal compound that boasts a few watch towers and a large variety of nooks and crannies to practice your surreptitious form of justice.

Fortunately each on of these missions offers a variety of engaging narratives, cinematics and objectives. It puts a lot of bang into this one terrain and enables you to get a good feel for the game and what is to be expected from Phantom Pain.

As I am predominantly a PC gamer, and Ground Zeroes and Phantom Pain are the first Metal Gear titles to be released on other platforms other than PlayStation in quite a number of years, Ground Zero taught me a lot about the franchise.

Firstly, that I now truly regret never buying a PlayStation. Even with a drastically lacking comprehension of the series’ overarching narrative and in-game history, I still found the game intriguing and pleasingly suspenseful. I immediately fell in love with the protagonist (no, not in that kind of way) and found the game play drew, and held, my attention.

Other things I realised is that Metal Gear games are very time consuming but in the best way possible. You will never once feel boredom or experience a dull moment. The masterful combination of an engrossing narrative, believable captivating characters and dialogue, highly detailed environments and tactically gripping game play makes this title a pleasure from start ‘till finish. Dragon Age: Inquisition is the third instalment of the Dragon Age series and was probably the most highly anticipated game of 2014, and with good reason. This fantasy RPG epic takes “in-depth” to a whole new level.

It showcases beautifully constructed environments rendered in breathtaking next-gen graphics. No matter where you go, and there are A LOT of places you can go, there is always something to see or something to do. Like J.R.R. Tolkien wrote: “Not all those who wander are lost.”

Beyond the plethora of main quests and side missions, I encourage you to wander, explore and discover. Break away from the beaten path and just head straight into the various wildernesses that Inquisition offers. That is where you will see the true genius, effort and essence of this game.

The character customisation is extremely thorough, something I’ve always enjoyed in a game, and allows you to choose from a great variety of races, classes and a vast variety of options for physical appearance. You even have two voices to choose from and can hear your character speak a few rehearsed lines to ease our choice.

But be careful not to get too sucked into all this game has to offer. Unless all you have is time to play games. To fully complete Inquisition you will need to spend at least 100 hours of in-game time, excluding the rather lengthy loading times, and that’s only with a single character play through. That’s over four full days of non-stop game play.

One thing that Inquisition accomplishes masterfully is its combination of narrative and game play. With so much to do and with most if it being quite time-consuming it is easy to be become discouraged. But the narrative is so rich and immersive that it would feel like a travesty not to see it through to the very end.

Its massive host of vivid and memorable characters quickly leave a profound impression on you and not before long their world and problems become just as real as your own.

Your greatest attachment will most probably be to your own team mates. As you progress through the game, completing certain missions, you will start recruiting members to become part of your inner-circle. As with previous Dragon Age games you can only have three members (excluding yourself) accompanying you in the game world. Some of them you will know from Inquisition’s predecessors, others will be new additions but just as believable.

As you start conversing with these characters, talking to them and going on missions etc., they slowly start crawling into your heart up to a point where you can’t help but care about each and every one’s squabbles. I realised this when I had about eight characters to choose from before going on a quest and it took me about 15 minutes to decide. I wasn’t thinking about each one’s strengths and weaknesses (well not only) but rather who I considered dear and trustworthy friends.

The truth is I trusted and liked them all. I became emotionally attached to each and every one of them, as if they were my real life friends. This is an amazing feat for a game and something that Inquisition developers, BioWare, are becoming exceedingly better at with each title they release, fusing the physical world with a digital world resulting in a living and breathing alternate universe. So now let’s move away from the bigger titles to give some attention to a very intriguing indie title that I recently had the pleasure of playing, namely The Fall. This Kickstarter funded endeavour was developed by Over The Moon Games from Vancouver, Canada and I think it is one of the best games to come from 2014.

In The Fall the player takes control of A.R.I.D., a female artificial intelligence who has been integrated into a futuristic combat suit. After suffering a terrible fall from the depths of space, the pilot of this suit has been knocked unconscious and many of the system functions have been damaged or require an “organic superior officer” to reactivate. Now, with limited functionality and conflicting programming, it is up to A.R.I.D. to navigate her pilot to safety through the ruins of an abandoned research facility.

But A.R.I.D is not alone. She had to override her own installed protocols to ensure the survival of her pilot and in doing so attracts the attention of another A.I. This A.I. is known as the “Caretaker”, a cold and calculated machine that has no regard for rule breaking.

In their first encounter, “Caretaker” interrogates A.R.I.D and asks her to “state her primary function”. She responds “to assist and protect the human pilot of this armoured combat suit”. After the unconscious human fails to “verify and validate” A.R.I.D’s story, the Caretaker classifies her programming as faulty. For the rest of the game “Caretaker” takes on the role of antagonist and is on a mission to capture A.R.I.D. and take her in for reprogramming.

The Fall provides a well-balanced combination of the adventure puzzler and side-scrolling shooter genres. This is enhanced even more with an extremely immersive and suspenseful narrative that has earned the game awards and recognitions such as Giant Bomb’s “Best Story of 2014” and a “Best Writing” nomination for the Canadian Video Game Awards.

The game boasts a mesmerizing and eerie atmosphere. The story line, environment and sound design all come together to provide a distinctively dark and mysterious experience. There is not much context revealed at the start of the game and it is up to you to explore and discover the nature of your predicament.

Interactive elements can be spotted by a text description that is revealed via your flashlight. These objects can be interacted with in various ways, such as storing it within your inventory for later use or other methods that will only be at your disposal later in the game.

Obstacles will mainly come in the form of unique and challenging puzzles. A lot of these puzzles require some running back and forth and turn out to be rather time-consuming even though the task is relatively simple. ‘This door requires a security card. Find the security card, open the door.’

But as the game progresses they become more intriguing, especially when you meet friendly mainframe A.I. who will provide help in various ways. He also brings a lighter tone to an otherwise fairly gloomy game.

The Fall will not be a game for everyone and will take some getting use to, but once you get past the learning curve and can start to indulge in the more engaging parts of the game it really starts to open up and draw you in. It certainly gets my vote. 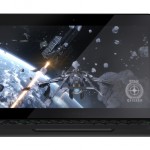