Evolution, not revolution: over the last couple of years it’s become a kind of creed among smartphone manufacturers. It makes sense too. They’ve more or less reached the limits of what’s possible with the materials available. And if we’re being honest there aren’t many phones that exemplify that attitude better than the HTC One M9.

The M8, which it replaces, was very good in most respects, but let down in a few key areas. Rather than trying to completely re-imagine the smartphone, the M9 seems like HTC‘s attempt at fixing those errors. That might not make it the most exciting phone to hit the market in recent years, but it does make it one of the best.

Granted, it’ll take someone with an exceptionally-trained eye to realise that you’ve gone one better than the M8, but if you care more about performance than standing out, then you could do a lot worse.

A matter of millimetres

When it comes to design and build, the differences between the M8 and the M9 really are marginal. The new phone is just over a millimetre shorter than its predecessor, less than a millimetre narrower and just three grams lighter.

With those marginal reductions, HTC has been able to ensure that the five-inch screen takes up just over 68% of the M9’s real-estate, compared with just under 67% on the M8. Now those differences may not be noticeable to your average buyer, but keen observers of the space, it shows that HTC still cares about producing great phones.

That said, M8 owners might take a little while to get used to the M9. For one, the power button has been moved from the top to the side. The edges are also sharper, which works aesthetically but does make the phone a little less comfortable for anyone with a tight grip trying to use it one-handed.

Change where it counts

Another obvious difference is that the two rear camera lenses on the M8 have been replaced by a single snapper on the M9. Despite that loss, the M9 takes significantly better pictures than it predecessor. That’s very important, because the M8’s camera was one of those significant weaknesses we mentioned earlier. It’s clearly worked too. The improvement in image quality from on device to the other is obvious and with the M9 you’ll feel a lot less anxious about leaving your DSLR at home.

Other crucial areas where HTC has made improvements include battery life, CPU, GPU, RAM, and internal storage.

Having owned the M8 for a few months now, I can confirm that the last of these was definitely necessary, with space running out rapidly unless you were willing to fork out for an SD card up to 128gb in size.

Those changes aren’t just about the numbers though. The M9 *feels* slicker, more capable and, well, better. The changes HTC’s made to the M9 have been thoughtful and it shows.

Sticking with what works

By the same token, the embattled smartphone maker has prudently decided not to meddle where it there’s no need to.

Apart from a few minor updates, the display is exactly the same as it was on the M8. So is the sound, which is pretty damn good. The additional features, such as fast charging, also remain pretty stable.

That kind of continuity is important if you’re brand loyal when it comes to your upgrades, but they also mean that HTC isn’t wasting time fiddling around where it doesn’t have to.

I recently traveled abroad with both the M8 and the M9. Hours and hours on plane after plane gave me plenty of time to look at and consider both devices. While the M8 has served me well over the past few months, there’s no doubt that the HTC One M9 is rooted much more centrally in the now. That’s largely down to those minor tweaks, that prioritisation of evolution over revolution.

Verdict: It may not go down as a classic piece of technological design, as its predecessors undoubtedly will, but for now you’ll struggle to find a better-crafted Android device. 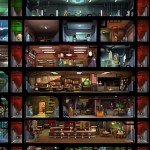