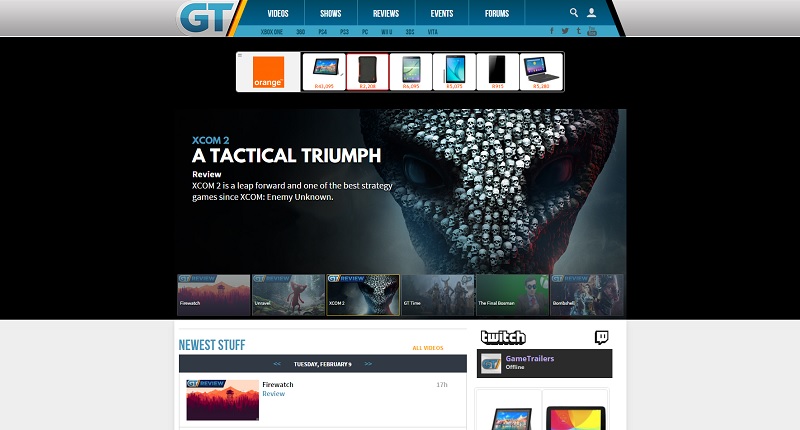 After 13 years, GT is closing down today. Thank you for your continued support over the years. It has been an adventure.

Today is the last day of GameTrailers. I wish it wasn’t so. I love all of our fans like family. Thank you for letting me do this job.

The decision seems to have been a sudden one as Jones went on to tweet:

If anyone is in the market for a voice-over narrator, host, producer, writer, manager, developer, editor, streamer – let me know!

According to a post on the official GT Facebook page, it appears as though the company couldn’t keep up with the likes of YouTube and Twitch:

After 13 years, GameTrailers is closing down today.

When GameTrailers was founded in 2002, internet video was a revolutionary concept. YouTube wouldn’t be founded for another three years; consumer live streaming was nine years away. Back then, online game journalism was still dominated by text articles and static imagery. The most prestigious coverage still happened in print. If you wanted to watch a show about video games, you had to watch it on a special TV station that had 10 shows.

GameTrailers helped change all that. Today, game journalism is dominated by video: trailers, live gameplay, Let’s Plays, and news shows. Now there are millions of hours of content available at any time on your PC, your game console, your TV, and your phone.

We’re proud we helped bring this world into being. That is the legacy of GameTrailers. We’re grateful to all of our fans who helped make us successful. Thank you for your continued support over the years. It has been an adventure.

GT is no stranger to change. Founded in 2002, the company was purchased by MTV Networks in 2005 for an undisclosed amount of money. MTV Networks later restructured some of its properties, which merged Xfire and GT into Spike Digital Entertainment.

The company was then purchased by Defy Media in 2014 for an undisclosed amount. This purchase included a restructuring of GT staff, including management and layoffs. GT had another bout of layoffs in 2015.

Over the past 13 years, GT featured shows covering events, such as Blizzcon and E3, video game review shows, talk shows, and featured productions.