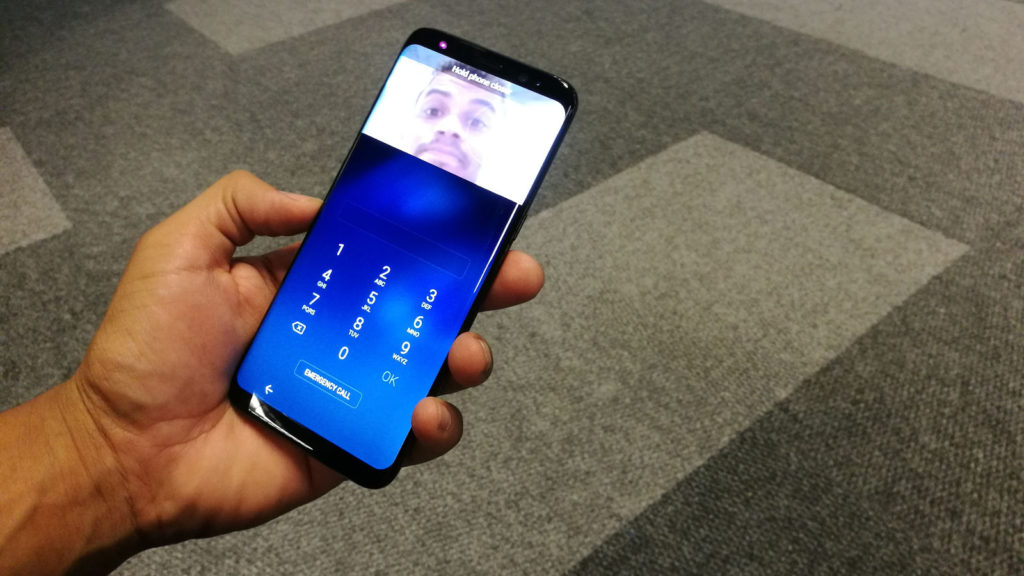 The Samsung Galaxy S8 has a ton of great tech packed into it. There’s that gorgeous screen that experts are calling the best mobile display ever. Then there’s the high screen/body ratio and great camera experience (so far).

It’s not perfect though, with the fingerprint scanner being in a ridiculously silly place. Fortunately, you can forego the fingerprint in favour of an iris scanner on the front. But again, things aren’t ideal here either.

Truth be told, the Galaxy S8 has the best mobile iris scanner on the market right now. But that’s not saying much, given the number of iris scanner-equipped phones on the market. Nevertheless, even with this in mind, the tech still has some way to go.

In fact, when compared to the Microsoft Lumia 950, it’s clear that Samsung has taken two steps forward and one step backward.

Microsoft released its last two flagships all the way in late 2015 and, while they weren’t the first to have the tech, they definitely put iris scanning on the map. The technology, which leverages the Windows Hello platform, sees an infrared light used to scan the iris (much like Samsung does now).

Speeding up the iris scanner The Galaxy S8 has definitely improved matters though. Where the Lumia 950 takes roughly three seconds to register a scan most of the time, the Galaxy S8’s best case scenario sees it unlocking in a second or so. Heck, the gimmicky ability to add a face mask to the iris scanning screen is silly but a notable addition too.

Iris scanning on the Galaxy S8 certainly points to the tech being an authentication method of the future then, being more secure than a fingerprint and approaching the fingerprint when it comes to speed. It’s certainly a generation ahead of Microsoft’s effort in many ways.

In saying so, Samsung has one lesson which it can take from Microsoft in this department.

The Lumia 950 allows users to improve the iris recognition data being captured (simply choose “improve recognition”), encouraging users to scan their iris in areas of varying light, or where the iris scanner struggles. Samsung, meanwhile, only offers the ability to register your iris from scratch again.

It seems like a small feature, but as I use the Galaxy S8, I definitely have come across a few situations where the iris scanner refused to work and I have to tap my PIN code instead. The ability to improve recognition in those conditions would’ve gone a long way to making the tech better.

This would also be a major plus for those wearing spectacles, with Microsoft specifically telling people to register their irises with and without glasses to improve accuracy. Samsung, meanwhile, tells those with glasses or contact lenses to remove them before registering with the iris scanner. No option to register with and without spectacles/lenses.

The ability to improve biometric recognition seems to be an industry-wide problem though — not being limited to iris scanners. Yes, today’s fingerprint scanners are extremely accurate, but it’s not uncommon for people to register a duplicate fingerprint in order to improve recognition. Heck, I’ve done this on review units in the past, and I’m tempted to do it on the Galaxy S8, owing to its tiny fingerprint scanner.

The issue of sunlight

But back to mobile iris scanning though. It seems like the tech in general also needs to solve another problem before gaining traction, in the form of sunlight.

Both the Lumia 950 and Galaxy S8 scanners see drastic drops in accuracy when outdoors on bright days. In fact, Samsung’s phone advises users to simply avoid direct sunlight when using iris scanners. At least the company tells you this, with Microsoft letting users find out the hard way.

In other words, it’s clear that the next generation of iris scanners will need to solve the sunlight problem and allow users to improve recognition (or be incredibly accurate) for the tech to see massive traction. Sunlight seems like an extremely tough problem to solve, given the fact that both phones use infrared cameras to recognise irises.

But don’t expect fingerprint scanners to go away at all either — in fact, I see it becoming far more ubiquitous than it is right now. After all, you can’t unlock your phone with your iris while it’s still in your pocket…

Ubisoft confirms flurry of games, but no details
Gaming • 17 May 2017
Read More
More