Whether it’s the architecture or actual hardware, UK-based ARM powers the vast majority of smartphones around the world today.

Its architecture is licensed by the likes of Apple (and well, everyone), while their CPU and GPU designs are used by everyone from Alcatel to ZTE. In fact, there’s pretty much a 100% chance that you’ve got a phone using their technology in some form.

The company has kept itself busy in recent months, revealing its two latest CPU cores. For starters, we’ve got the Cortex-A75 core, being the latest in a line of regularly updated heavyweight CPU cores. More importantly for cheaper phones, ARM has updated its low-powered cores for the first time in roughly four years, in the form of the Cortex-A55 core.

The company is also delivering greater flexibility in how silicon manufacturers (such as Qualcomm, Huawei’s HiSilicon and MediaTek) can mix high and low-powered cores together. Currently, silicon manufacturers have to pair them in 2+4, 4+4, 2+6 or even 2+8 configurations. But the firm’s DynamIQ tech will allow pairings such as 1+3, 1+4 or even 1+7.

When you take the new cores and better flexibility into account, are we correct in expecting mid-range and entry-level phones to take a massive leap in power next year?

We posed these questions and more to Laurence Bryant, Vice-President of the Personal Mobile Compute Business Line at ARM.

Gearburn: Just how big of a jump can we expect from next year’s budget smartphones as a result of the new Cortex-A55 cores?

Laurence Bryant (LB): This will depend on the workload and the specific chipset, but we are expecting to see performance uplifts of up to 2x through a combination of the CPU change and process.

Gearburn: Which manufacturers do you expect to gain the most from the A55 cores?

LB: We are expecting all manufacturers to benefit from the improved Cortex-A55 performance and the doubling in efficiency it offers over the Cortex-A53. Cortex-A55 will feature in little-core only configurations, but will also be used in conjunction with big cores. The increased efficiency will benefit battery life of a phone and enable the chipset vendor to allocate more power budget to the larger cores in big.LITTLE systems for peak performance.

Gearburn: We also see a move to more flexible core arrangements (1+3, 1+7 etc). What kind of interest are you getting from silicon manufacturers in this department?

LB: There is a high level of interest in the new configuration possibilities that DynamIQ enables. The interest is coming both from silicon partners and OEMs, who all recognise the benefits that big core performance delivers for the end-user.

In real life use-cases, the use of 1+7 [one powerful core and seven lightweight cores – ed] will double the performance compared to many octacore solutions used in the volume tier, so we are expecting great adoption.

Gearburn: To add to the last question, could we see these arrangements become the norm for budget devices, rather than quad-core or octacore A53? How much more expensive do you expect these new arrangements to cost compared to current budget chips (e.g. octacore/quad core A53, Snapdragon 650)?

LB: We certainly see the potential here. As an example, with the right cache sizing, a 1 big plus 7 little core arrangement is negligibly larger in silicon than octacore A53.

Gearburn: From a financial point of view though, do you foresee phones using 1+3 and 1+7 core arrangements to be more expensive than phones currently using legacy quad-core and octacore A53 designs?

LB: We see no reason for a 1+3 or even a 1+7 core arrangement to lead to more expensive phones than those currently using legacy quad-core [and legacy octacore presumably – ed]. However, this is ultimately in the hands of our silicon partners and their customers.

Gearburn: How big of a jump can we expect from the A75, compared to the A72? In terms of both battery life and performance?

LB: We expect to see a 50% performance increase when moving from the A72. Efficiency gains will be in the order of 30%.

Gearburn: Machine learning was also pushed heavily by ARM as a use case for these new cores (and the new GPU). How will machine learning be different compared to current chips, for the average consumer?

LB: To date machine learning and AI has largely been run in the cloud. This means that the user’s device must be connected to the internet in order for any inference to take place. As we go forward, the inference will take place on the device itself and means that even in offline situations, the user will get a response.

Latencies will be lower, meaning faster and more useful responses and additionally your personal/private data can be processed locally rather than being sent up to the cloud. To deliver on this vision, ARM is setting out to increase the AI performance of mobile platforms by x50 over the next three years.

Gearburn: Furthermore, what kind of machine learning scenarios could we see being enabled by these new chips?

LB: To name but a few… We expect to see many vision and image related usages. The ability to understand the scene that is in front of the device will allow a whole new photographic experience where the phone can track the subject of interest. Machine learning techniques will also be used to increase the level of image quality by understanding the scene for optimum image capture and will be critical for classifying and organising the huge amount of video and photos that a modern user generates. Audio understanding will be highly prevalent too and this will include understanding natural language and performing real-time translation.

We can expect to see always-on security type applications where a device will be able to listen for and recognise unusual events like breaking glass or a baby crying.

Security will be another area where machine learning will be used. This could be for authentication or for the detection of malware on a device. There will be many other applications of AI and machine learning at the edge that we haven’t even imagined — we look forward to seeing how our partners innovate on top of our technology!

Gearburn: We’ve seen Apple, Samsung and Qualcomm all making their own CPU cores lately. Does ARM see this as a threat? How is the company responding to this, if it is?

LB: The ARM ecosystem relies on a diverse mix of ARM architecture compliant solutions so we definitely do not see our architecture licensee partners as a threat. ARM has a full portfolio of CPUs ranging in size and purpose, we give our partners choice to design their own cores, license our Cortex family or combine both approaches. 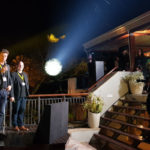