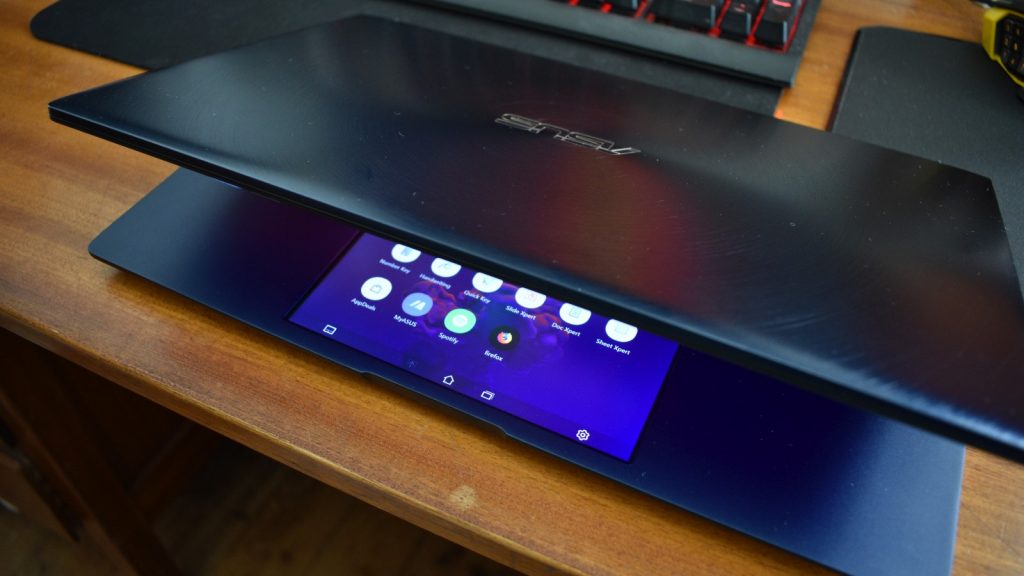 South Africa’s ultraportable laptop market has never been in a better position. Practically every manufacturer in 2019 has a light but powerful offering for business travellers and power users, and it’s difficult to choose between them.

Almost all sell themselves on battery life, low weight and a powerful combo of hardware when you need the power most. But that’s basically each device.

Asus, with its Zenbook, differentiates itself through a number of nifty design additions, some of which I rather wish weren’t included at all.

On the face of it, the Zenbook is a gorgeous machine.

It meshes a classy navy blue sheen with aluminium trim scattered about its frame. It’s not the thinnest laptop available, but that’s a good thing too. This allows Asus to pop a full-sized HDMI port and a duo of USB ports on either side. Ports are important, and thinness shouldn’t be traded for functionality. Ever. 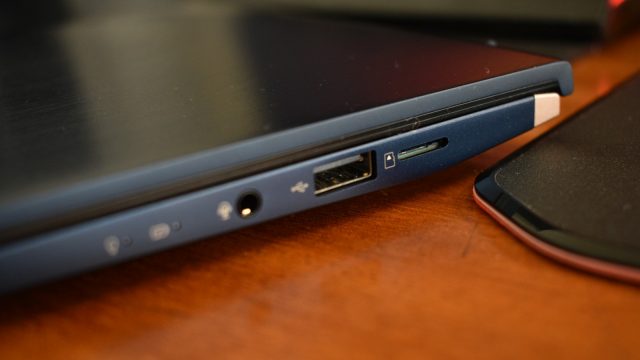 A card reader, USB-C port, and proprietary charging port are also included, but how I wish Asus went with USB-C Power Delivery for charging this machine. It would’ve allowed travellers to cut down on one more charger that could be lost, forgotten or broken.

Still, it’s a slim device. The screen especially so.

Asus, unlike HP or Dell, rid the Zenbook of the thick bottom bezel that most companies employ. Bezels are also incredibly thin for a laptop too, leaving not more than a centimetre at the top, and even less on the sides and bottom.

Typing on the Zenbook is a dream. I loved the Acer Swift 7’s keyboard, but the Zenbook just rewards users with more key travel. Actuation feels great too and fills the user with confidence. This ensures that touchtyping doesn’t require much of a learning curve. Two large SHIFT keys flank the keyboard too. Yes please. 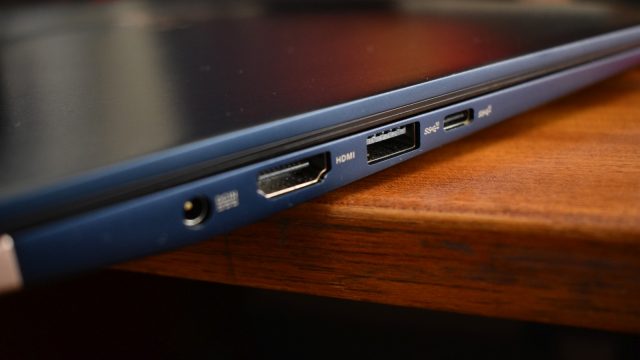 Keyboard rigidity is also surprisingly good. There is some indentation around the H and J keys under considerable pressure, but it’s not noticeable enough to be a real issue in a day to day use. And considering that I’m a gentle typer, it never really became an issue for me. It’s a lot better than some laptops we’ve seen.

One daft design decision though is including the power button alongside the delete button at the top-right of the keyboard. It’s incredibly easy to hit it by accident. It feels the same as every other key on the machine too, so you’ve only realised you’ve tapped it when the laptop goes to sleep. It’s a trend, but one that needs a bit of a rethink.

I would’ve also loved to see a fingerprint reader on this machine too, perhaps melded to the power button somehow? 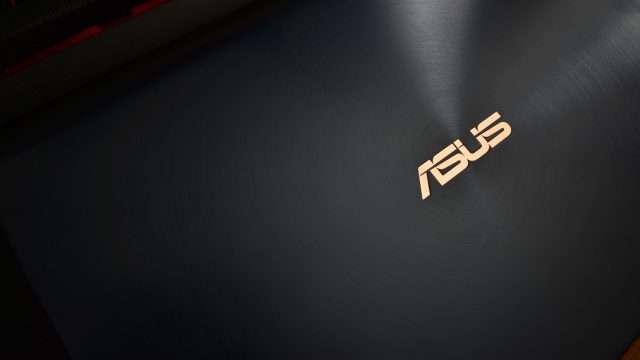 Thankfully, when you do switch it off by accident, this thing boots incredibly quickly, and resumes from sleep almost immediately after opening its lid.

The lid can be opened with one hand too, but you’ll need to learn how to do it. And considering that the Zenbook doesn’t weigh much, it requires a bit of a jiggle too.

But the hinge design itself feels firm. There’s very little movement when typing, and the screen potion of the device actually helps prop the keyboard up when the laptop’s open. It’s a small design feature but makes a huge different for typing comfort.

Still, the size of the Zenbook means you can use it, quite literally, as a laptop on a plane.

Heat isn’t really a problem either, unless you’re using it plugged into the wall and crunching big numbers, resizing large images, or performing Windows updates. But the fan whine is noticeable, and actually distracting to a point where you’ll want to use this thing on battery only. 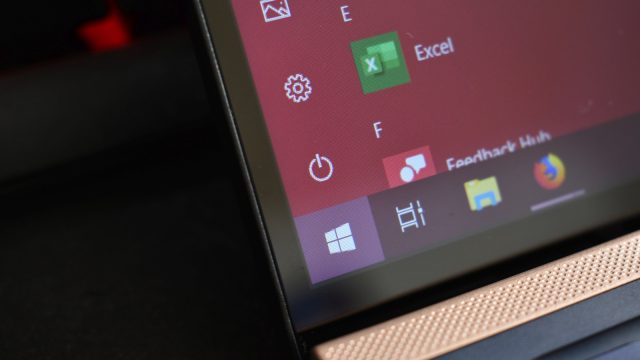 Internally, the Zenbook is a full house too. My review unit featured an Intel Core i7-8565U, which usually remains below 1.5GHz when word processing. It can, however, buzz up to 4GHz if need be, which is just ridiculous for a laptop.

Four cores with hyperthreading meant that this machine never really lagged at all, during any task I threw at it.

16GB of RAM also accompanies it, and I’ve yet been able to use all of it. Users who their machine to process RAW images, decompress files regularly, or Chrome tab hoarders.

That said, if you’re a gamer, you could probably get away with playing Overwatch or League of Legends on this thing. Nvidia’s MX250 with 2GB of dedicated memory is included as the secondary display driver, and it has more than enough horsepower to pile through low-demand games. 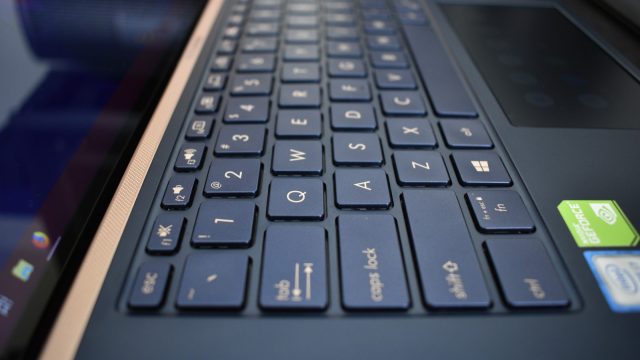 Storage is courtesy of a Samsung-made NVMe drive with 1TB of storage. It’s a monster, and means opening apps like Firefox in well under a second.

And as I’ve mentioned earlier, there’s no fingerprint sensors included on the Zenbook, but Windows Hello face authentication is supported via the webcam.

Sound is courtesy of Harman Kardon too. The speakers, located at the bottom and sides of the laptop, have rich, fulfilling sound. There’s a fair bit of bass produced too, so listening to music on the ZenBook without a Bluetooth speaker is definitely possible.

Battery life is a mixed bag. While on the second-lowest brightness setting, and typing this review alone, battery drained from 100% to 82% during a two-hour flight. I can get around five hours on a single charge with mixed use, and while that’s impressive, I could easily get around eight hours with other machines. 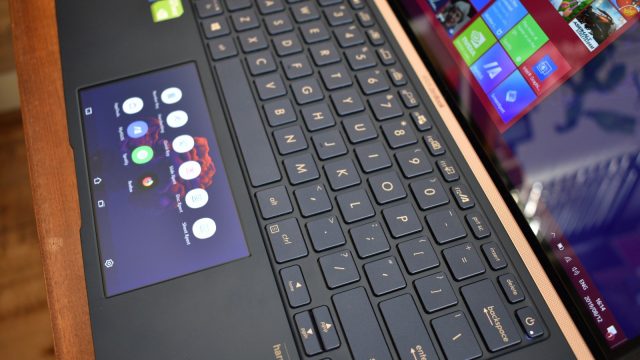 However, there’s one thing I particularly dislike on this laptop. Asus’ recent high-end machines have replaced the touchpad with what it calls a ScreenPad, a high-resolution touch display.

It looks like a touchpad, but when tapped, turns into a screen. Yes, essentially a second screen. It’s a nifty idea considering that the ScreenPad houses shorcuts like Copy, Cut, Paste, etc, and links to apps on the ScreenPad itself. You can use it to open Spotify, for instance, and some apps have special UI for the ScreenPad itself.

But, during my review period, I just couldn’t factor any of this into my life. In fact, I used the ScreenPad as a touchpad for most of my review, because that’s how I use a laptop. Why would I deviate from my usual laptop usage habits if the ScreenPad doesn’t enhance it?

Shortcuts are in the start menu or taskbar. Copy, cut and paste can be performed using simple key combos. And the screen itself I found too small to use for any useful purposes. 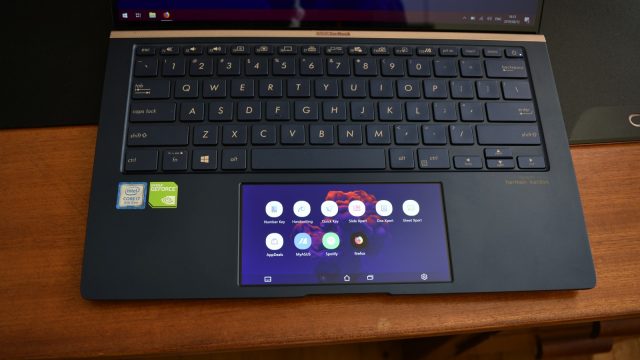 I’d rather have an actual touchpad here. Give me one that tracks well and true — the ScreenPad’s doesn’t, and feels wooden and inaccurate — and one that won’t turn into a screen that I can accidentally move windows to or activate randomly.

I understand why it’s attractive to turn the touchpad into a screen, but it takes away from the user experience rather than adds to it. I wouldn’t be able to use it often enough to warrant its exclusion. And maybe, just maybe, Asus could price the Zenbook slightly lower if it were just removed.

It’s a real shame. I had the same issues with the Acer Swift 7. It was the best travel laptop I’ve ever used, but it was ruined by daft touchpad design and phantom touches.

The Asus’ is better made, but it could be better if it weren’t for the gimmick attached to it. 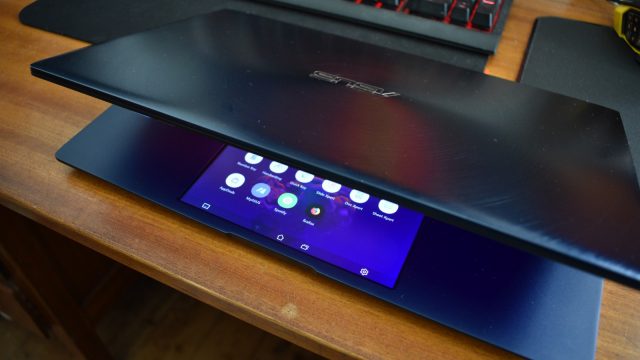 I actually believe Asus made a better laptop here than Acer, and probably many of its rivals. It’s an all-round excellent performer, offering hardware that can be tortured with heavy workloads, and a body you’d scantly feel in a backpack and can fit on a lap in a plane.

But because the touchpad is such an integral part of the experience with this laptop, I just can’t quite recommend it. 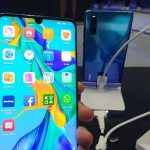