Many adjectives come to mind when describing the Mercedes Benz S-Class. Many of them I have used in the past, like luxurious, lush, refined, powerful even and of course expensive. However if there was one that — perhaps nowadays is slightly overlooked only because weâ€™ve become accustomed to it — which could accurately describe the S-Class, it is technologised.

Now you may chuckle and say, â€œSir, you made that word up, it does not exist!â€ however according to my trusty dictionary app it does:

â€˜technologisedâ€™ is — verb (used with object) 1. To make technological; to modernise or modify with technology.

Perfect. Sounds remarkably like a combination of â€˜technologyâ€™ and â€˜energisedâ€™, and if there were ever a car to be described as energised with technology, surely the Mercedes Benz S-Class is it.

Consider for a minute that the S-Class was the first car in Europe to incorporate vehicle airbags and, in 1978 with the help of BOSCH, pioneered ABS technology. If you dig deeper into the S-Class history youâ€™ll note that in 1957 Mercedes had already debuted crumple zones into the S-Class, collapsible steering columns and pre-accident tensioning seatbelts. Or more recently pre-safe, which basically arms the car to the hilt in the case of driver inaction and with the aid of many many clever computers, does everything it can to avoid you having an accident. Many of these innovations we take for granted today, but can be attributed first, to the Mercedes Benz S-Class.

So, when the blokes at Ingolstadt announce that one is on the cards, the motoring world collectively sits up and takes note.

The 2014 S-Class was recently unveiled to the public and while the flagship super limousineâ€™s exterior suit is as smartly trimmed as ever, looks are not really what weâ€™re after at Motorburn, itâ€™s the technology and crikey is the new S-Class jammed packed full of it.

Powered up the first thing youâ€™ll notice is a complete lack of regular lighting. Instead, a first for Mercedes and a first in the world, the new S-Class features full LED lighting with up to 56 LEDs in each headlamp, 35 in the rears, which dim automatically to reduce glare for those following (thoughtful) and roughly 300 LEDs for interior ambience.

Central to this Mercedes spaceship are the controls, featuring a completely new multimedia centre, with independent access from any seat. Up front there are two 12.3 inch high resolution TFT colour displays in 8:3 formats, one in front of the driver displaying car instrument telemetry, and the other for infotainment and comfort functions. â€˜Command onlineâ€™ turns your iPhone or Android device into a handy remote control via dedicated apps allowing for operation of the multifunction seats, air conditioning and ambient interior lighting. Perfect if Jeeves isnâ€™t paying attention. 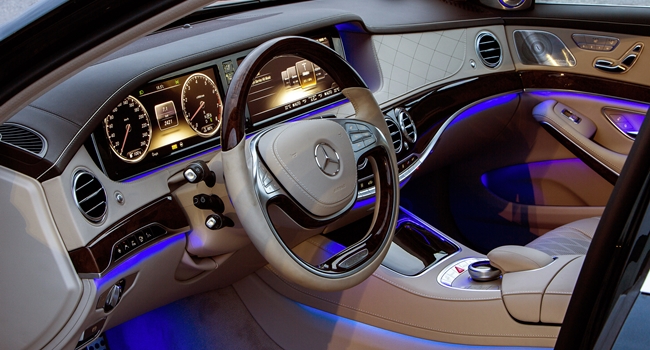 Rear accommodation is taken to new levels of comfort and refinement with business class-like reclining seats (maximum backrest angle adjustment of 43.5 degrees) featuring a massage setting based on the hot stone technique (serious), heating and cooling settings. A rear instrument tunnel with â€˜thermo-cupholdersâ€™ for your mocha java and an aircraft type folding out table arrangement and rear specific Bluetooth connectivity with touch screen controls.

Apparently acoustic specialists took great measures to make the new S-Class as quiet inside as an empty chapel. So you should even hear the muffled ring of your iPhone buried deep in the recesses of your laptop bag. Emirates beware. 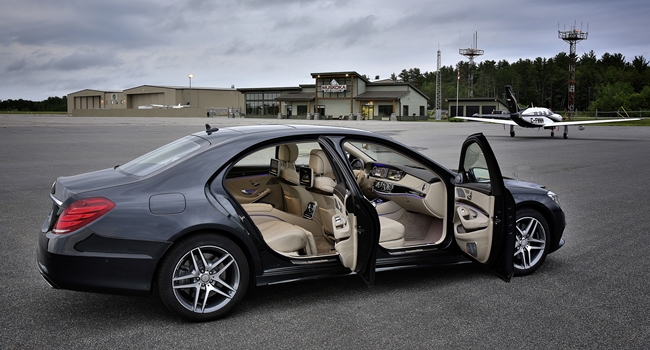 Not to snub safety of course, two cameras equip the S-Class with a 3D view of the road ahead with a range of up to 500m. â€˜Road surface scanâ€™ throws a beady eye onto the road surface ahead and scans for unevenness whilst â€˜Magic body controlâ€™ (yep magic) prepares the suspension for what lies ahead.

Improved â€˜Pre-safeâ€™ can detect pedestrians ahead and initiate full autonomous braking up to 50km/h, and around the rear can recognise an imminent rear end collision warning the following traffic by activating the hazard lights, although in South Africa this might be misconstrued as a thank you gesture.

â€˜Distronic plusâ€™ allows Jeeves to relax a little up front while you conduct business in the rear and will follow vehicles in traffic automatically, maintain a set distance all while detecting for crossing traffic and pedestrians.

â€˜Active lane keeping assistâ€™ keeps him from wandering out of his lane and â€˜Night view assistâ€™ detects pedestrians and animals in the road switching the speedometer display into a large sniper-esque thermal imagining screen (cool). Donâ€™t worry though because â€˜Attention assistâ€™ will warn Jeeves of his inattentiveness and drowsiness and even when last he took a pee break, and will even highlight nearest rest stops via access to Google Maps.

Two solar sensors measure solar radiation relaying info to the climate control system, whilst GPS navigation data can determine the direction of the sun and altitude of the car allowing the car to react to change in temperature caused by direct sunlight even if there is no change in the interior temperature or if the solar sensors are blocked (impressive).

The 2014 S will launch with four engine choices, two regular and two electric-hybrids the S350 BlueTEC features a 3l V6 diesel mill with 190kW and mountainous 620Nm of torque and for the time unconscious CEO or MEC, the S500 which adds bi-turbo V8 power with 335kW and a 4.8 sec 0-100km/h time (to Parliament Jeeves!).

Those industry leaders with a conscience will be eyeing either the S300 BlueTEC HYBRID which features a 150kW 2.2l four-cylinder petrol engine and like the name suggest adds a 15kW electric motor capable of fully electric only propulsion. Sipping just 4.4l/100km of fuel and spouting only 115g/km of CO2. Or the S400 HYBRID which adds a more a meaty V6 petrol power plant with 225kW and 370Nm and a 20kW electric motor enabling just 6.3l/100km and a segment record of 147g/km of CO2.

Expect two anti-establishment AMG models later on, the S63 AMG with a stonking great V8, plenty of go faster add-ons and a deficit-levelling price tag and the even more insane S65 AMG V12 bi-turbo.
No final word on pricing, but expect things to kick off in excess of R1m up to the R2.5-million region for the S65 AMG. Executive transportation indeed, just donâ€™t expect board of directorsâ€™ approval on the AMG models though.